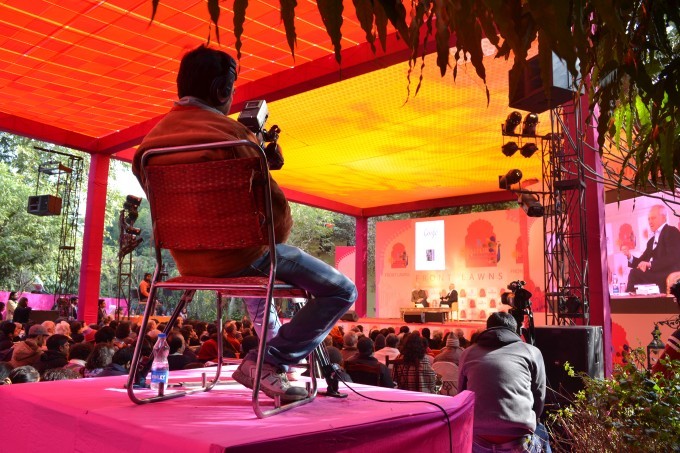 In the early hours of January 19th I hopped a plane from Chennai to Jaipur. The lush and luminous South receded and when I descended into the smoky, bone-seeping cold of the North, I was excited…even if regretting that I had to wear socks again.

It would be my first time attending the Jaipur Literature Festival, billed as the largest free literature festival in the world and—since its start in 2006—what many consider the preeminent literature fest in Asia.

Or how about to the Google Mughal Tent to hear a talk on sex in the modern day Middle East?

What about Jhumpa Lahiri? I hear she’s signing books right after her panel discussion with Jonathan Franzen.

Not your style? Reza Aslan is speaking about the “historical” Jesus on the Front Lawns. But don’t even try. You’re never going to find a seat.

Best thing to do is avoid the dour-looking teenagers having a smoke by the Vodafone kiosk and head straight to the artisan pizza and sangria in the back.

The Jaipur Literature Festival is a carnival. And despite the easy criticisms you can throw at it (elitist, corporatized, dependent on celebrity star wattage), I have never been to anything like it.

I found myself star-struck by William Darlymple, an author known to just about every backpacker and expat to set foot in India.

I nodded my head during a discussion on 21st century New Delhi, that teeming behemoth I had lived in for a year and had grown to love and hate in equal measures. What is the deal with Gurgaon anyway? Is there such thing as a Delhiite?

I was quietly perplexed as Aam Admi Party activists shouted questions at Yashwant Sinha, former finance minister and senior leader in the Bharatiya Janata Party, during a discussion on India’s future. I was then quietly frustrated when Festival organizers tried to silence the activists. Aren’t literature festivals supposed to raise uncomfortable questions?

I applauded along with six hundred (mostly) young Indians who had come out to hear the closing debate of the Festival: “Democracy is the worst form of government, except for all the rest.”

What was the verdict? You’re not going to get citizens of the world’s largest democracy to agree that democracy is a bad thing. The buoyant faith of the debaters (and the audience) that India is and would forever be a democracy could make even the most disillusioned democrat crack a smile…

And then there was this invisible thing, which I can only describe as joy.

Was it the joy of people who had graduated from college years ago (myself included) who were finally listening to smart people talk about something vaguely interesting again…like that seminar on Thucydides by your favorite professor?

Or was it just the joy of being around people who are there for the same reasons as you? That there are no strangers, only friends you haven’t talked to yet?

These are the kinds of questions the Jaipur Literature Festival raised in my mind. And one other: How am I going to get back here in 2015? 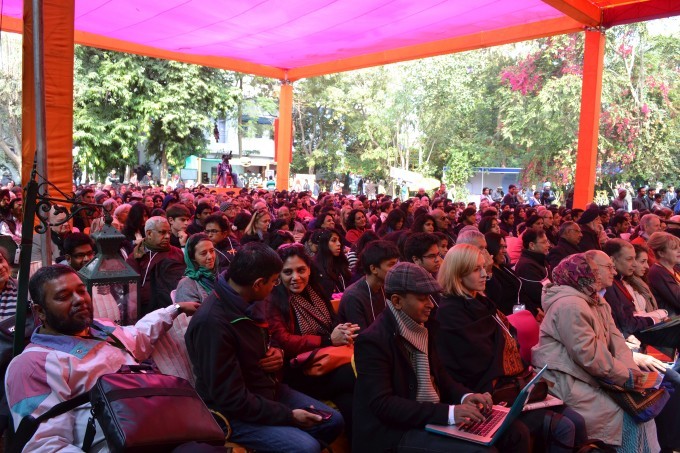 Liv's passion for gender equitable development and political participation began while she was living in New Delhi in 2011-2012 conducting independent research at Jawaharlal Nehru University. Her research focused on the influence of national-level women's NGOs on public policy formation and implementation through the lens of the campaign against sex selective abortion in India. Through this experience, she also cultivated an interest in public health issues affecting marginalized populations, spending the last year in Bangkok, Thailand contributing to the research division of an international NGO working on issues related to HIV/AIDS and reproductive health across Asia. Liv is looking forward to returning to India and learning more about community-based approaches to resource management and gender development.

2 thoughts on “Of Joy and Jaipur”