About a month ago, I joined the leadership council of AIF’s Bay Area Chapter and last week had the honor to attend a talk between Alyssa Ayres, a Senior Fellow for India, Pakistan and South Asian, Council on Foreign Relations and Dr. Sanchita Saxena, the Executive Director for the Institute for South Asia Studies at UC Berkeley, put together by the Commonwealth Club and AIF. During this engaging dialogue, Dr. Saxena asked Alyssa Ayres to describe her perspective on India’s future, how it has progressed over the past three decades, and the key role it plays as a global player in the world economy, which were all topics discussed in her book, Our Time Has Come.

Being a first generation Indian American, growing up, I would visit India every summer, which meant spending time with my family, eating delicious food, and watching Bollywood movies. Listening to Alyssa Ayres speak about the way India has significantly undergone economic reform due to Prime Minister Modi’s more outward approach has made me see India in a new light. My key takeaway from this talk was for the imperative need for Americans to become more cognizant of India’s emerging presence as a leader on the world stage.

Alyssa Ayres stressed on the importance of Americans to become more familiarized with India. The business community has recognized the opportunity India has to offer; however overall Americans need to become more informed on the reforms being made to create an uplifting out of poverty and to sustain a growing middle class. It was inspiring to hear that India took initiative to show its commitment to move away from traditional fossil-fuel energy systems by collaborating with France in forming the International Solar Alliance in the 2015 climate talks. India is also investing in military modernization to protect itself in the Indian Ocean.

Having lived in the Bay Area my entire life, I live in a bubble surrounded by South Asians and was extremely shocked to learn that the number of undergraduate students that enroll in a study abroad program in India is minimal. Alyssa Ayres shared an interesting survey that was conducted by the Institute of International Education in 2015 which showed the United Kingdom to be the top destination for US study abroad students, while India came in at #15. A similar pattern was seen in a study done by Institutions of Higher Education Modern Language Association in 2013. Spanish had the highest number of enrollments for a foreign language, while only 3,090 students opted to take all Indian languages combined. With Prime Minister Modi being a champion of free trade and economic integration, I completely agree with Alyssa Ayres in the importance for the young generation to both study abroad in India and learn the various languages. I am proud to be a part of an organization like AIF that has fellowship programs and volunteer programs for high school students to visit India, so that passionate young adults can become more aware of the lucrative opportunities India has to offer.

Event with Pan-Asians@SAP: Diwali, the Festival of Lights and Giving

Service and Giving Back around Diwali: A Volunteer-Led Panel 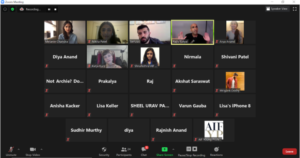