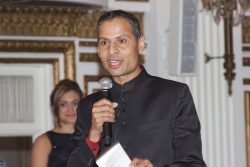 Earlier this year, the American India Foundation community bid a fond farewell to Venkatesh Raghavendra, affectionately known to all as Venky, from our staff team. We reflected on his achievements in a decade of service, welcomed him into our volunteer ranks (while conferring on him a new title), and wished him well with his new work with Safe Water Network.

Pradeep “Kash” Kashyap and his wife Reena hosted a dinner to allow AIF staff and volunteers from around the country to pay tribute to Venky. They were gracious hosts as always. Indeed, Kash and Reena have hosted dozens of gatherings in their home over the years related to AIF. This one, however, was one of the most special and poignant. 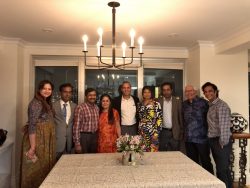 Volunteers from as far as Philadelphia, Washington, DC, and Boston braved rush hour traffic to travel to New York to take part in this special evening. Participants gave tributes to Venky, and we all viewed a slide show of photos from our departing colleague’s years at AIF that was assembled by summer intern Tamana Chhibbar under the direction of Nandini Ansari. Naturally, Venky spoke as well, with typical humility and expressions of appreciation for others. He also narrated the slide show. Venky pledged his continued support to AIF, which he has made good on (and then some) in the months since then – most notably at the recent Richmond, Virginia Gala. 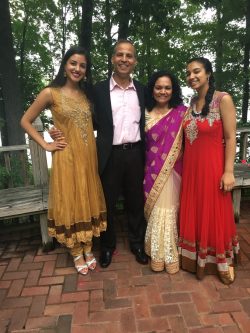 When I had my opportunity to pay tribute to Venky, I reflected on the fact that one of the reasons I joined AIF was one of my mentors worked with Venky earlier in her career and held him in the highest regard. I mentioned that Venky was one of the most decent, caring, intelligent and hard-working people I had ever worked with, or known. Others echoed my sentiments, and added their personal stories about how Venky helped and encouraged them, or simply modeled professionalism.

One striking thing about the slideshow was how happy Venky always seemed to be in every photo. I believe it is more than simply being photogenic and having a nice smile. I think that someone who so consistently does right by their organization’s mission and their fellow human beings emanates contentment and happiness that come through in all mediums, including photography.

Today Venky serves as AIF’s Ambassador and Thought Leader at Large. He is already making a positive impact in that volunteer role, and setting a positive yet humble standard for others, as he has done throughout his journey at AIF.

One thought on “Paying Tribute to Venky”