“Why are you here?” is a question I have been asked quite frequently while I have been here in India for the past six weeks as an AIF Clinton Fellow. It has been a sensitive question for me, even months before I left. Since then I had been questioning my reasoning to leave everything that I knew for a country so unfamiliar and so unknown to me. The months leading up to my departure were filled with cramming miscellaneous information about the country’s history, struggles with eradicating the caste system, and contentious divides between the North and South. For some reason, I felt that had I studied and researched more fervently, I would have been more prepared for the intellectual whiplash I would soon experience. But nothing could prepare me. Because even when I am learning something new, every day is still feels like I am drinking from a fire hose. Here in Hyderabad, Telangana, where I am placed for my project, sometimes it is a matter of juggling learning Telugu and Hindi. Sometimes it is trying to understand the diverse cultures and religions here. And sometimes it is getting to know the ins and outs of my host organization. Often times, it is not only difficult to retain the abundance of knowledge I have gained here, but it is even more difficult to sift through the nuances of all that I have been exposed to here. 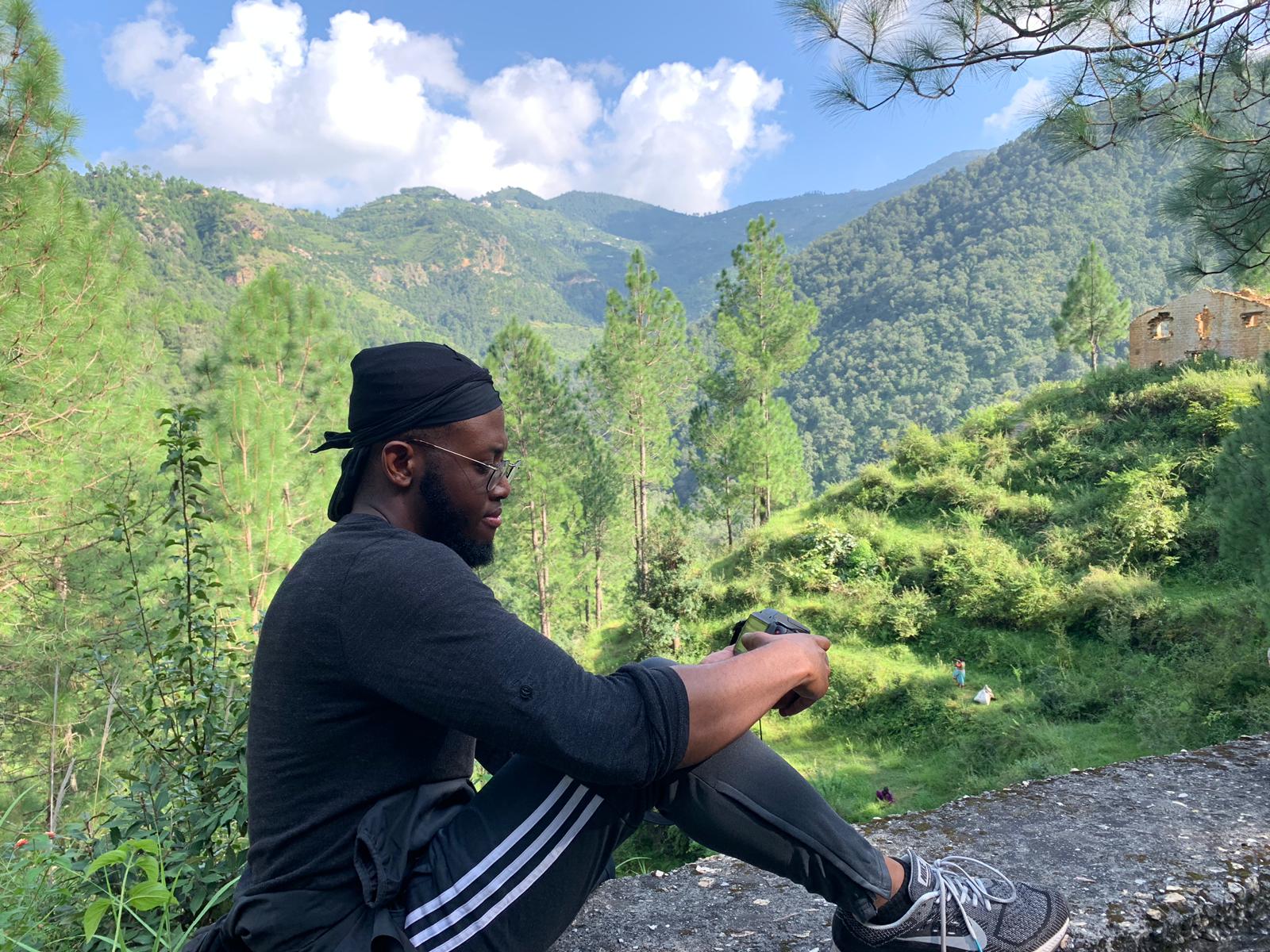 It most definitely left me with thoughts symptomatic of an imposter syndrome that I quickly recognized but failed to shut down. At this point, the overwhelming amount of information that I felt the need to understand at first glance would paralyze me from learning more. It took me about a week at my host organization, Youth4Jobs, to finally get over this mentality. It was upon arriving at Youth4Jobs, a non-governmental organization that builds employment capacity for youth and adults, that I realized that I was supposed to feel unprepared. But it took a while until I embraced and accepted this feeling.

Not only was I overwhelmed upon arriving to Hyderabad, I also was concerned about how I would use the nine months left of my Fellowship and what I hoped to accomplish for Youth4Jobs. Essentially my role has been in communications, to help promote a prestigious award competition for artists with disabilities throughout India. This “Not Just Art” Award will culminate in an art awards ceremony piloted by a former AIF Clinton Fellow, Priya Charry. This event will be the culmination of all of the artists with disabilities who submitted artworks from all around India. Many of these artists have disabilities that inhibit them from living traditional lifestyles but many of them have already decided that they would not let their disability prohibit them but enable and empower them. As a part of my project, I am proposing to shoot a short film series that will showcase the stories of these artists to inspire others around India and abroad.

Initially, I came in with doubts in my ability to produce quality documentaries that would exceed not only my expectations but that of my organization. Equipped with a point-and-shoot camera and a dodgy tripod with no audio recorder in hand, I knew that I would struggle with achieving the quality of video that I normally would make. It wasn’t until I met a local Hyderabadi artist, Lekha, that I began to think differently.

In an interview with Srilekha Mandalapalli, one of the artists who submitted their work for the “Not Just Art” competition, she expressed to me that she dreams of a world where everyone is free to do what they please without fear of judgement. This freedom is an acceptance that is embraced by the whole world irregardless of religion, class, creed or language. As a Hyderbad native, she shares that the city is a melting pot that is reminiscent of this world. Here, everyone is not only able to coexist but also to commune and share each other’s culture. 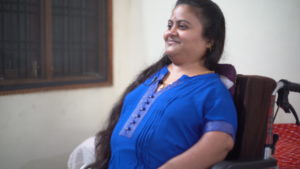 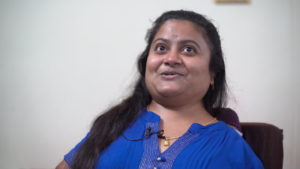 One day, she explains, society will become just as discriminatory of one’s social labels as nature is. This is the nature she adores and often portrays through her art. Nature treats everyone the same and has no consideration for anyone and their disabilities. Mother Earth’s emotional aloofness resonates with her as she has learned to harness that energy into compassion for others and passion for her art. As an artist with a rare congenital condition known as Arthrogryposis Multiplex Congenita with deformities of both limbs, she often times experiences many difficulties in her daily life that make it difficult for her to live life independently, but she pushes onward. This is a story that I took to heart. At the end of her interview, she left me with some thoughts to ponder on.

Lekha also hoped that her viewers remember that one need not focus on what they cannot do but on what’s they can do. She explains that her daily tasks may render her physically dependent, but she will never allow herself to be mentally reliant anyone. She went on to tell me that your thoughts are your own only and that “no one can take them away from you.

When we finished the interview, she noticed that I was very invested in the whole process and I explained to her that documentary film making was my type of art. “See? You love what you are doing, yes? Then there is no reason for you to be self conscious. If you are satisfied with your work, that is what is important.” Her wealth of wisdom was abundant and as if she knew my own mind, she began to talk on finding peace within pursuing one’s passion despite the financial security it may bring. She explained that if you have to have a separate career, treating your artistic passion as a personal craft rather than an assignment, you will make the best art.

Her creative process is one we can all learn from. She again draws from nature as inspiration to this process. When she approaches a new painting, like nature, she refuses to forecast her works’ outcome and allows it to arrive at its own accord. To excessively plan her piece will inevitably destroy its creativity which is paramount in a competitive world of painting where mere technique is not enough.

This same philosophy she applies to her life and urged that I do the same. “People think too much” and they never end up doing. Again, our minds are the only force stopping us and often these inhibiting thoughts are only a reflection of our insecurities. For this natural human condition, she simply recommends to “do” as she did since 2007 when she had every reason not to paint but instead of over-contemplation, she “did.”

After meeting her, my existential crisis and my constant questioning of my being here in India was resolved. Instead of toiling over my value as a filmmaker and the quality of what I contemplated producing, I decided that I would just do. No longer do I question myself “Why I am here?” but instead focus on finding meaning to my being here by doing, following through on my goals and jumping at every opportunity to achieve them.

Sometimes, I lose track of the present and my purpose in it because I am always calculating the next move. Being in India this month has been paralyzing in that it has exposed me to more than one social sector than I plan making a part of my career. Although making social documentaries is something that I want to keep as an important facet of my life and career, I am also passionate about public health and medicine. One of the reasons why the question of me being here was one I often avoided was because I have felt quite caught in between both fields. Now that I realize that overthinking what I plan to do next will end with me never deciding on either. So, taking after Lekha’s philosophy in life and art, instead of being paralyzed by the future and my limitations, I will focus on painting today’s present and let tomorrow’s masterpiece naturally reveal itself.

Ismael is serving as an American India Foundation (AIF) Clinton Fellow with Youth4Jobs in Hyderabad, Telangana. For his Fellowship project, he is organizing awards to bring the talent pool of artists with disabilities into the mainstream and to provide a platform for artists to showcase their work for sustainable livelihoods. Ismael’s interest in global work started when he was ten years old. Inspired by writers like Anthony Bourdain, Ismael became eager to learn about other cultures. He began producing his own radio show (The Embassy), hosting students of various cultural backgrounds to share their stories, music, and culture. Passionate about both medicine and culture, Ismael had his first exposure to development work while volunteering on a medical mission boat that served villages along the Amazon River in Brazil. There, he filmed his first social documentary. This experience inspired him to pursue an international career combining his passion for medicine, public health, and documentary film-making. He participated in a public health semester in Santiago, Chile, studying alternative approaches to medicine as practiced by local indigenous communities. While in Chile, he filmed "Solitude - A Companion Abroad," a documentary about loneliness and self-discovery that won the grand prize at the IES Abroad Film Festival. Ismael was part of research team studying community trust and mistrust in the context of the water crisis in Flint, Michigan. As a researcher for the University of Michigan and Michigan State College of Human Medicine, he participated in the Future Public Health Leaders Program sponsored by the Centers of Disease Control. Ismael hopes to pursue a Master’s in Public Health in Epidemiology or Health Behavior to inform his career in medicine during which he will continue filming documentaries for social change.

2 thoughts on “Peace in Unpreparedness and Existential Crisis: Lekha’s Philosophy of Art and Life”