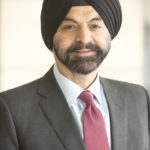 Ajay Banga is Vice Chairman at General Atlantic. He joined General Atlantic after 12 years at the helm of Mastercard, leading the company through a strategic, technological and cultural transformation over 11 years as president and chief executive officer and one year as executive chair of the board of directors.

Over the course of his career, Ajay has become a global leader in technology, data, financial services and innovating for inclusion. At present, he also serves as Chairman of the International Chamber of Commerce and is an Independent Director at Temasek and for Exor, where he serves as Chair of the company’s Environmental, Social, and Corporate Governance Committee. He became an advisor to General Atlantic’s BeyondNetZero venture at its inception in 2021. He has previously served on the Boards of Kraft Foods and Dow Inc. Ajay is a member of the Trilateral Commission, the Co-Chair of the Partnership for Central America, a founding trustee of the U.S.-India Strategic Partnership Forum, a former member of the National Committee on United States-China Relations and Chairman Emeritus of the American India Foundation.

He is a co-founder of The Cyber Readiness Institute, Vice Chair of the Economic Club of New York, a former member of the World Economic Forum’s EDISON Alliance, and served as a member of President Obama’s Commission on Enhancing National Cybersecurity. He is a past member of the U.S. President’s Advisory Committee for Trade Policy and Negotiations.

Ajay is a member of the Weill Cornell Medicine Board of Fellows. He has also served on the Board of Governors of the American Red Cross, as well as the Boards for the Asia Society, the New York Hall of Science and the National Urban League, among others.

He was awarded the Padma Shri Award by the President of India in 2016, the Distinguished Friends of Singapore Public Service Star in 2021, the Ellis Island Medal of Honor in 2019, and the Business Council for International Understanding’s Global Leadership Award. He is a fellow of the Foreign Policy Association and was awarded the Foreign Policy Association Medal in 2012.

Ajay began his career at Nestlé, India, where for 13 years he worked on assignments spanning sales, marketing and general management. He also spent two years with PepsiCo before joining Citigroup, where he rose to the role of chief executive officer of Citigroup Asia Pacific.