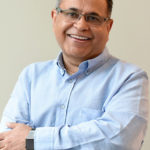 Harit Talwar is the global head of Goldman Sachs’ Consumer business, overseeing Marcus by Goldman Sachs and its partnerships, including Apple and Amazon.

Harit joined Goldman Sachs in 2015 as a partner to lead the firm’s entry into the consumer space. As the first hire for the business, he helped build Marcus – a “150-year-old startup” – into a modern consumer platform that today serves millions of customers. The business has been recognized as a successful disruptor, named one of Fast Company’s Most Innovative Finance Companies, and ranked #1 in J.D. Power’s Customer Satisfaction survey in US Personal Loans in 2019. It has also been featured in a case study by Harvard Business School on successful innovation inside a large organization.

Prior to joining Goldman Sachs, Harit was president of US Cards and EVP / chief marketing officer at Discover Financial Services. Before that, he was managing director of Morgan Stanley’s Consumer Banking Group International. He also spent 15 years at Citigroup, working in a variety of roles across the US, India, the Middle East, and Europe.

Throughout his 30-plus year career, Harit has focused on four essential ingredients for creating a successful franchise: driving customer-centricity; innovating through engineering, data, and design; hiring diverse and talented teams; and having a clear, consistent strategy. From running established businesses to building and scaling start-ups inside large organizations to overseeing transformational M&A activity, he has a wide range of experiences. Harit was named as one of American Banker’s 10 to Watch in 2017. He has been featured in The Wall Street Journal, The New York Times, Fortune, Forbes, CNBC, and Yahoo! Finance and spoken at various industry forums and leading business schools.

Passionate about philanthropy and addressing inequalities, Harit serves as the co-chairman of the board of the American India Foundation, a member of the Asia Society Global Board of Trustees, and one of the founders of Ashoka University in India. He previously held leadership positions with the Museum of Science and Industry, Chicago; the Chicago CMO Summit; the American School of Warsaw, Poland; the College of Lake County, Illinois; Children’s Memorial Hospital, Chicago; and Pratham UK.

Harit earned a BA (Hons) in Economics from Delhi University in India and an MBA from the Indian Institute of Management, Ahmedabad. He lives in New York with his wife and has three children.