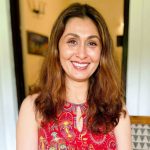 Kalpana Kanthan is Chief Development Officer at the American India Foundation. In this role, she oversees the philanthropic portfolio of the USand India teams, as well as the marketing vertical—in conjunction with communications—to drive AIF’s strategic growth, expansion, and programmatic impact. As a member of the Global Leadership Team, her responsibilities span the strategy and management of AIF’s fundraising landscape—including major gifts, individual and institutional giving, retail fundraising, planned giving, and digital fundraising—donor and stakeholder stewardship, thought leadership enhancement, and strategic communications. Her professional success rests on the pillars of citizenship, community building, colleagueship, and social justice, aligning her purpose-driven work ethic with the core principles of AIF’s mission and vision.

Kalpana’s extensive career spans higher education, nonprofits, consulting, and media. She is a passionate storyteller and relationship-builder, whose initial training is in journalism and television writing and production from Mumbai, India, where she had worked as a writer, producer, and anchorperson prior to moving to the US.

She began working with New York City nonprofits in 1997, first as a development and communications consultant and later as the development team lead at Classroom, Inc. (now Read to Lead), an education technology organization serving middle- and high-school students in underserved areas. She then worked as a consultant and volunteer on projects in education, curriculum building, and community engagement for several organizations in the city.

In 2015 Kalpana joined Columbia Business School’s W. Edwards Deming Center, driving the center’s center’s board stewardship, strategic communications, and fundraising goals. She executed all aspects of the annual Deming Cup for Operational Excellence—an award presented to Fortune 500 CEOs for their leadership and commitment to continuous process improvement—as well as numerous other programs for the school’s business partners, faculty, students, and alumni.