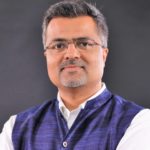 Nishant Pandey is the New York based CEO of the American India Foundation, providing strategic leadership to its operations globally. He is an economist by training, anthropologist by heart and
entrepreneur by mind-set. He began his career as a banker but soon realized that development sector was his calling. He joined Oxfam as its Programme Officer for South India where he designed and developed multi-state, multi-stakeholder, value-chain programmes on the theme of ‘power in markets’. Subsequently, he moved Oxfam’s global HQ in Oxford (UK) to lead on programme development and management in 12 countries in Middle East, Eastern Europe and the CIS. Before moving back to India as AIF’s Country Director, Nishant was based in Jerusalem where he led one of the most complex and challenging operations as Oxfam’s Country Director for the Occupied Palestinian Territory & Israel.

Nishant firmly believes in the power of win-win partnerships. In his career spanning 24 years, he has forged several multi-stakeholder initiatives involving civil society, governments and corporate partners, big and small, global and local. Nishant speaks and writes routinely on development issues, corporate social responsibility and public-private partnerships (PPP). He appears regularly on media outlets such as NDTV, CNN News18, Republic World and TV Asia. He has authored Op-eds for reputed outlets such as The Economic Times and The Hill and has been quoted in The New York Times, Wall Street Journal and NPR. He has been invited as a speaker at events and conferences organized by Harvard University, Georgetown University, CGI-New York, Asia House (London), European Commission, UNDP, Unicef, Confederation of Indian Industry (CII), NASSCOM and many others. Nishant is a founding-member and Vice-Chair of the India Philanthropy Alliance and a member of the Advisory Council of the Indian School of Leadership.

Nishant acquired his Master’s in International Development & Finance as a British Chevening scholar. He also holds M.A. in Economics, B.A. in Anthropology and Advanced Management Programme from the Henley Business School, University of Reading, UK.