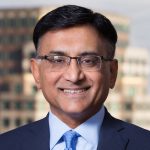 Raj is Managing Director – Wealth Management and Head of The Sharma Group, a high end boutique within Merrill Lynch’s Private Banking and Investment Group and has over three decades of experience in customized investment and wealth management for entrepreneurs, corporate executives, families and institutions. Raj runs a national wealth management practice based in Boston.

For fifteen consecutive years, Raj has been recognized by Barron’s Magazine as one of America’s Top 100 Financial Advisors. In addition, Barron’s recognized Raj in their “All Stars” list – one of fifteen advisors who have appeared in Barron’s ranking of America’s Top 100 Advisors for fifteen consecutive years. He was also recognized by the Financial Times of London ranking of Global Advisors for the past four years as well as the top advisor ranking in Forbes Magazine for the past two years. Raj is also a regular contributor to local and national media on investment strategy, private wealth management and financial planning.

Raj was profiled in a book on Boston, “An Extended Family”, by Boston Globe photojournalist Bill Brett. He is a regular contributor to local and national media and his articles and interviews have appeared in publications such as The Boston Globe, Barron’s Magazine, Wall Street Journal, Financial Times, Fortune, Boston Business Journal to name a few.

Raj is an active member of the community and is involved in many local and global organizations. He is a current trustee and former Chairman of The Boston Harbor Island Alliance. Raj is a member of the Board of Trustees for Emerson College and a trustee and board member of the American India Foundation (AIF), an organization devoted to accelerating social and economic change in India. In addition, Raj is Chairman of the Board of Youth LEAD, an internationally recognized organization promoting cultural understanding and tolerance among high school students. Raj was the 2013 recipient of the “Solas Award” from the Irish International Immigrant Center for his commitment to promoting cross-cultural dialogue and for his inspirational example of achievement and civic engagement as an immigrant. In 2016, he was recognized as one of the hundred most influential people of diversity in Boston by Get Konnected, a networking organization.