“At night as I lay awake looking at the darkness, listening to the silence, prefiguring the future, picking out the past and scraps I had overlooked, those rejected events which now come to the foreground, large and important, so that the weight of destiny no longer bore on the current problems of my life, whatever they were at the time… That night I found again the sweet hours of insomnia.”
~ Muriel Spark, A Far Cry From Kensington

“I feel, when lagged, as if I’m seeing the whole world through tears, or squinting; everything gets through to me, but with the wrong weight or meaning. I can’t see the signs, only their reflections in the puddles. I can’t follow directions, only savor the fact of being lost. It’s like watching a foreign movie without subtitles, perhaps: I can’t follow the story, the arc of character, but something else — that inflection of a hand, this unregarded silence — comes through to me intensely.”
~ Pico Iyer, In the Realm of Jet Lag

Two jagged bronze structures by the Berlin-based artist Alicja Kwade are on display at the Mudam Museum in Luxembourg. In each she overlays the World Timezone Map, one timezone atop another, from across two continents. Stripped of its correlating geographic region and stacked atop itself like plywood, what remains is a skeleton of crooked lines that veer and jut at unintuitive places. This map of time, Kwade suggests, is as full of illogical human oddity as any other, as determined by political alliance, religious fervor, war, defiance, colonialism and post-colonialism, by agriculture and industry as the borders of the countries we inhabit. Spain doesn’t align with its proper zone because it changed time during World War II and never changed it back.  Indiana has been controversially split between two timezones for decades. India could have three timezones but maintains only one, and it doesn’t adhere to Daylight Savings Time except for the three years during the Sino-Indian and India-Pakistan Wars when it did. These decisions mark eras, raise generations, and record death certificates. 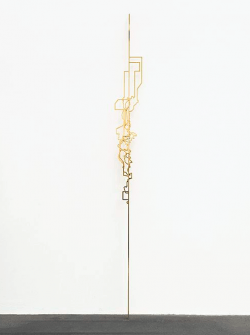 In another piece Kwade sets two clocks on opposite walls, mirror images except that one moves just faster than a second and one just less than. The position of each second hand represents how even the slightest alteration can manipulate the way we experience the passage of time.

I think about this now because time moves differently here. At first I’m convinced that I’m just travel-weary, nothing a night of rest can’t put in focus. At orientation I am aware of questions I should ask and questions I should be prepared to answer: What are my hopes for the upcoming year?  Have I traveled through India before? I should ask the children of the Bal Ashram how they feel about child labor and the CEO about his plan to leverage the two percent corporate responsibility bill.  Or, no, it’s the other way around. I want to ask the CEO how he feels about child labor and the children of the Bal Ashram how they would spend two percent of corporate wealth in India.  Would the Ambassador teach me a Bollywood dance?  I drink Assam tea before each session to stay awake. At night I stare at nothing for hours.

We stand before an eighth grade social studies class in a rural village some hours from Jaipur.  This is not where I thought we were going; I was expecting a stone-sculpting center.  I check my clothing. I’m not naked, but it feels like that kind of dream. I  slept through a hike today, maybe I am still asleep and everyone is at the stone sculpting center.  The students ask us to name each US state.  We ask them to repeat the question.  Next they ask us to discuss the constitution, and when we have trouble with that they settle for a song.  A song? We rack our brains.  There are six of us, and none can think of an appropriate song for an eighth grade social studies class. Later we’ll think of dozens, but for now we sing the Star Spangled Banner.  We’re so embarrassed we start to giggle. We explain that you’re not really supposed to giggle during the national anthem, we just can’t remember the words. But maybe we’re not supposed to tell them that we can’t remember the words to our national anthem, either.

I tell my sister after and she says, “You SANG?! No offense but, uh, Skevingtons aren’t really known for their singing abilities. Do you have any friends left?”

In the corner of the guesthouse a few girls whisper stories after bedtime. The lights are off already, and to hear I have to concentrate. One is silly, one is scary, and two start with, “Tell me about a moment that changed your life but would never translate well in an interview.”  I recognize that this will become a memory that floats back to me in other years, adrift and free from chronology.

I’ve been in India for over a month now and jet lag has long abated. The delay is one of culture and personality: I study a single minute for an entire day and days go by in minutes. The pace of living has not changed but my reaction to it has slowed. Facial expressions linger on longer than words. I’m still not sleeping well.

I don’t joke because humor takes time, trust has to be established, and that requires time too. But my earnestness embarrasses me.  I am so eager not to offend that I’m too slow to acknowledge when I’m the one being offended: A woman I don’t know grips my hair and declares that she can’t imagine why anyone would want hair like mine. This emboldens the others around her to touch me without permission, asking the question among themselves. I don’t remind them that this is neither professional nor kind; I laugh to join in to avoid being set apart. A teachable moment passes us by.

On the way home I watch an elephant storm a clamorous mess of oncoming traffic. Motorcycles spin out and rickshaws halt as I observe this ancient creature barrel through modern society like a living, breathing King Kong. I’m the only one who intimates such metaphors though, everyone else is annoyed.  My desire to be a cultivated global citizen struggles against my irrepressible glee. I scramble for a camera, then stop myself, then I regret stopping myself. The elephant is gone. I may see this scene again, but it is this first time that I can never capture.

Joseph Brodsky says that articulation lags behind experience. “How’s India?” my friends ask.  I tell them I can’t say yet, only time will tell.