Anecia’s Fellowship is made possible by the Rural India Supporting Trust.

In the U.S., we often hear this phrase that one man’s trash is another man’s treasure. This metaphor can also be said in India. In Indian culture, rarely does anything go to waste. Whether it be food, water, clothes, or paper. The idea of throwing away something that could be useful is honestly a foreign concept. Instead, jugaad is used (defined in Hindi as any kind of creative and out-of-the-box thinking or life hacking that maximizes resources for a company/person and its stakeholders). And so you revamp it, mend it, or just figure it out. 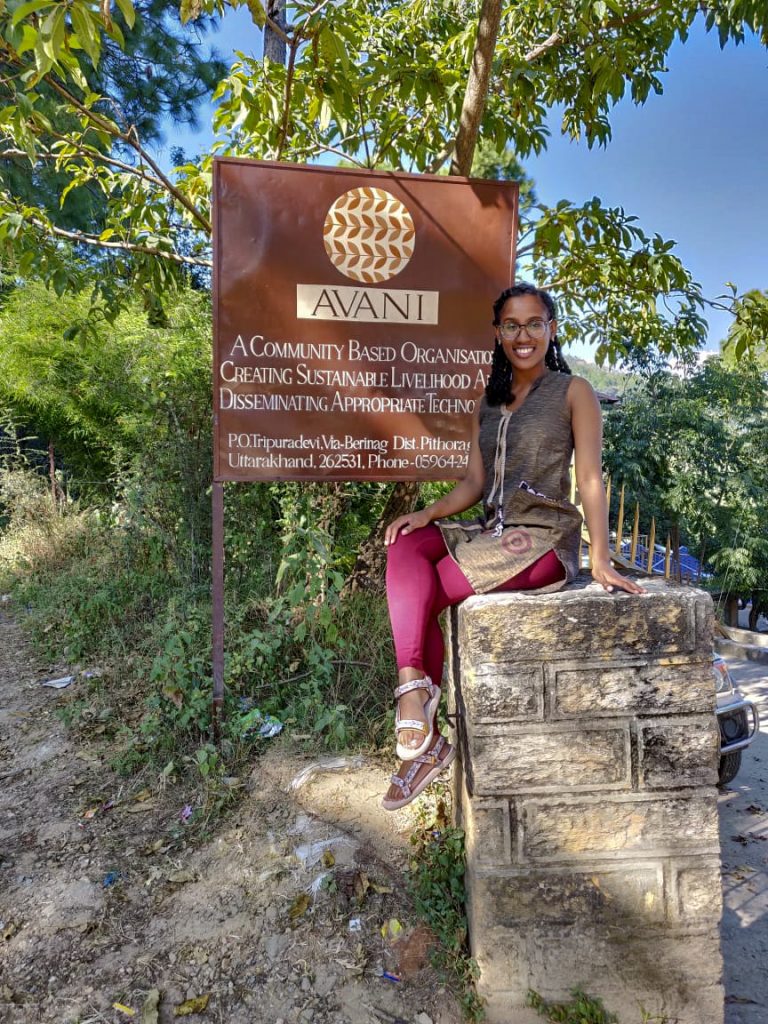 When Americans think of trash and waste consumption, it is common for many of us to overlook the level of work that is done in order to “get rid” of our waste. I was one of these many Americans and I am still learning as I go. I am currently living in Northern India, in a village on the foothills of the Himalayas. In such a rural area, excess trash is a definite no-go. So much so, Avani (my host site) has a zero carbon, zero waste footprint in all of its work. The word “avani,” translated from Hindi, means “earth.” Since its creation, Avani has emphasized the use of environmentally conscious and locally made products. The idea is to preserve earth’s natural beauty as much as possible, and for the past three weeks, I have been able to adjust. I was able to get by with no toilet paper (replacing it with water), recycling my uneaten food in its respective bins, and buying a cotton handkerchief to blow my snot filled nose when allergies arrived. However, there was one major thing I could not avoid… My monthly cycle, and the “waste” that comes with it when using pads.

Within the U.S., there has always been a stereotype that discussing a woman’s cycle is gross, and in India this taboo subject did not become any easier for me. I have heard stories in India where women on their period are confined to their room and not allowed in common areas like the kitchen or living room. This stereotype is somewhat similar in the United States. Growing up, it was ingrained in me that what occurs “below” should only be talked about in sacred spaces (i.e. to my mother or the elder women of the family, and close girlfriends). Therefore, when that time of the month arrived, I was irritated. Not only is PMS-ing unsettling, but so is the fact that my monthly gift likes to stay for a week. Which translates in India as a week’s worth of pads to “get rid of.”

The local women who live and work in my community use different methods during their monthly cycle. Instead of purchasing pads, which in a rural setting can be difficult to find and also costly, they utilize cloth. As a result, they do not need to burn any trash. Whereas for a foreigner such as myself, who prefers disposable options, the process can be more technical. In a remote region of Uttarakhand, this was hardest thing to acknowledge and adapt to. In the back of my mind, I heard an inner voice echo: “Here I am! So, what are you going to do about it?”

How does one, then, go about navigating this unpopular topic? Especially in a new environment where monthly periods are as common to women in America, as they are to women all over the world… Every woman, regardless of where she lives, knows that part of womanhood is monthly cycles. It is part of what distinguishes us from men. However, that does not make it easier to navigate. In order to figure out my next steps, I had to be vulnerable and open up to an elder woman – or aunty in the Indian context – to ask for guidance. Her answer… shocked me at first. The only way to get rid of the “waste” after having your period and using disposable pads, is to burn this trash yourself, in the forest!

Yes, this means walking to an area with no one around, and lighting the trash on fire. To the many people who are reading this, this could sound as harsh as littering in your community, but it is the reality in this region of Uttarakhand. Unlike the urban areas in India, where waste disposal is more organized, in such a remote setting in the mountains, one must take it upon themselves to dispose of their own waste. Therefore, the common practice is burning one’s trash. This can be seen as a tough reality, but in my opinion it translated as: If you have enough time to make this trash, then respectively, you have to find a way to dispose of it yourself.

In my host village in Uttarakhand, for the most part, the person who makes the trash is the person who must dispose of it. Thus the notion that I can create as much trash as I want has been minimized considerably. This “luxurious” assumption that I can create as much waste as I want to because someone else will take care of it, changed when I became the “garbage woman” myself. Instead, I now focus on how I can minimize my waste footprint every day. Yes, periods are human nature and will happen regardless, however, what I have learned is to be more considerate and more thoughtful about waste management through my monthly gift.

This experience, of having to get rid of “red waste,” has made me question: How many times have I thrown away something miscellaneous in the U.S., only to not care about the processes that it has to undergo in order for me to “get rid of it?” How many people are involved in this process? My period is not only something I go through personally, but that other women have to face as well.

The color red is a very integral part of Indian society. Women wear red when getting married, or use KumKum powder (which is also red) during religious events in Hinduism as well as a way to signify that they are married (a red line in their hair). However, it can also be seen as ironic that, on one hand, the color red is acknowledge for its vibrancy and purity, but on the other hand, when women are on their menstrual cycle, it is considered unclean. That being said, no matter how much “red waste” we create, there is beauty in the process of being inventive and using the limited resources available. During the Fellowship Orientation in September, a former Fellow said something I will never forget. He stated that, “If people are living there, then you can live there, too.” I took this to mean that despite how uncomfortable or unique of a circumstance may seem to me, it’s one that I can survive because the people around me have been doing it long before I was even born. If the women in my village can navigate their periods and burn their waste, then I can, too. And as an outsider living in Indian society, I have no choice but to adapt and appreciate this process of waste management in a new light.

Anecia recently completed her degree in International Studies from Spelman College. This will be her second time travelling to India; she studied at the University of Hyderabad in the spring semester of 2017. Her time there opened her eyes to many issues in India, and she became particularly passionate about the issue of farmer’s suicides in India. Anecia is passionate about uplifting women and girls, and is the co-President of a mentorship program for young girls called TeenAngel Society Inc. Anecia has also worked as a community organizer in Atlanta, and also has blogged on various issues facing women.

One thought on “Red Waste: Rethinking Menstruation, Taboo, and the Environment”