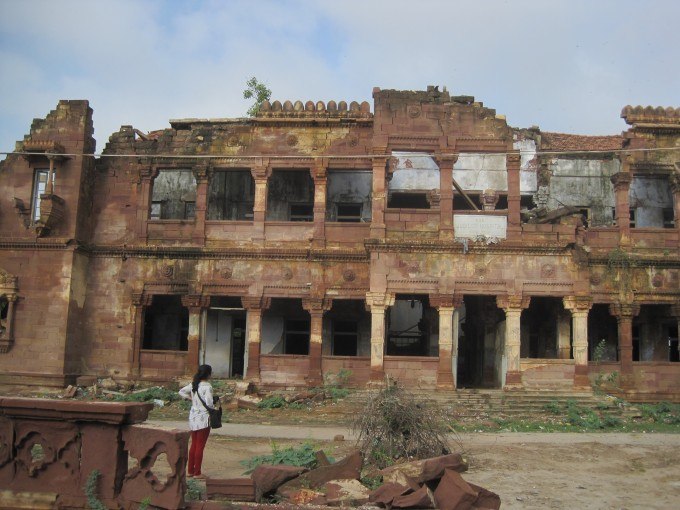 Legend says that beneath the ground in Bhuj, Kachchh, Gujarat is a snake. Long ago, when a King wanted to settle the land and build a kingdom, he was told that he would have to thrust his sword into the ground with a sure hand, and spear the snake through its head. The King traveled to the center of the land, and pushed his blade into the ground with all his might. But he was not sure of himself, and quickly removed the sword to see whether or not his aim was good. So, the snake did not die. The King was not confident enough, and consequently the snake lived to writhe beneath the ground. Perhaps that is why there are so many earthquakes in Kachchh.

For Indians near and far, January 26th is Republic Day. It is a day to honor the Constitution of India, and to celebrate nationality. But for Kachchhis, January 26th is something different. It is a day to remember the 2001 Earthquake in Kachchh, and over 12,000 of the lives it took. On this day, people gather to mourn many lost lives with a bittersweet and to appreciate how far they have come since that tragic day.

I find that in some small way that earthquake is ever present in Kachchh. It worms its way into polite conversations and stows away in the backs of minds, resurfacing when memories push it forward. Sometimes I go out to by vegetables and the subziwalla offers up a simple “you know Bhuj is most famous for the earthquake” in a manner-of-fact tone. Sometimes the stories are more detailed. “Everything was broken,” a man said during one of my interviews. His baby daughter was killed when his ancestral home fell to the ground. Then there are more physical reminders: buildings lying in disrepair, half broken monuments, cracks in the walls of my apartment, and bricks crumbling on old plots where half-standing walls serve as ghostly reminders.

Then, there are the long term effects. The seismic movements below the earth’s surface have contributed considerably to the shifting of underground water tables. This has affected the quality of life and livelihood in Kachchh. Rivers have dried, droughts have ensued, and iron clouds natural underground water sources. Iron can turn the brightest of vegetable colors grey.

Driving to work every morning this week, my coworkers have taken to sharing their stories of the earthquake. They show pictures and say “this was where the Swaminaryanan Mandir was,” or “I remember running out of my classroom.”

Kachchh is a region of Gujarat state which lies in an area of seismic upheaval.  It is roughly 350 km from a tectonic plate boundary separating the Indian Plate from the Eurasian Plate. Every 50 years or so, this causes a large earthquake that shakes the ground in lower Sindh, Pakistan and Kachchh Gujarat. In between those earthquakes are smaller ones, and tremors every now and again.

A few weeks ago I sat in on a meeting with a local official in which a few NGO’s were planning some community events for the months of January and February. When mention of an earthquake commemoration came around, the official was quick to say, “Make sure to remember the victims of other global, natural disasters this year.” This is the true spirit of Kachchhi people. There is a giving, caring nature in Kachchh for those who have gone through similar loss. During the snowstorms in the US earlier this year, everyone was quick to ask about my family, holding up local papers with long descriptions of the American snowstorm.

What amazes me most of all about Kachchhis and their attitude towards the earthquake is their resilience. Kachchh has gone through immense change since the earthquake, and it is developing and transitioning faster than ever before. Recently a friend told me, “10 years ago Bhuj basically had just two roads.” Now, Bhuj is big, puzzle of a place quickly becoming home to many new industries. The artisans I have been interviewing for Khamir built new towns and started over after the earthquake. Some created businesses they would never have dreamed of without the tools and resources that post-earthquake development projects afforded them. People have moved forward without forgetting. I am the student here. My classroom is Kachchh, a bustling place that rests somewhere in the precipice between rural and urban. My lessons are the kind that every human should have: lessons in caring, growing, changing and remembering.

The earthquake, in a small way, is a part of my story as well. The American India Foundation was founded in response to the devastation of the Gujarat earthquake. As the only fellow in our class placed in Kachchh, and especially now as we commemorate the earthquake, I feel humbled to be a part of a growing lineage of friendship between AIF and Kachchh. On January 26, Kachchhis revisit a part of time that remains stagnant, lingering, and ever present, left behind but never forgotten. This year, I am revisiting it with them, stumbling through the galis of their minds into memories, remembrances, and aspirations.

Coco comes to the AIF Fellowship with a passion for art, visual culture, and artisan craft as means for creating sustainable livelihoods. Coco became interested in India after spending a summer volunteering at a K-12 school in Pali, Rajasthan at age 15. She went on to earn a BA in Asian Studies with High Honors from Colgate University. As an undergraduate, Coco completed field work in Northern India through NYSICCSI, collecting miracle stories from Shirdi and Sathya Sai Baba devotees. North India ignited her appreciation of artisan communities and fair trade movements in rural India. Coco further explored India's visual culture in her senior thesis on the role prints depicting Bharat Mata before 1947 played in the evolution of Indian national identity. A two time Upstate Institute Fellow, Coco brought her aptitude for field work and marketing experience to Upstate New York, where she completed community outreach projects for cultural preservation and art initiatives in the Adirondacks, Utica, and Madison County. As an undergraduate she was a student ambassador for Colgate's Multicultural Center and President of Masque & Triangle, Colgate's student theater. After graduating, Coco was a US Department of State Critical Language Scholar in Jaipur where she continued her study of Hindi at the American Institute for Indian Studies. Coco looks forward to working for Khamir this year, where she will learn more about artisans and art practices in Gujarat.

3 thoughts on “Remembering the 2001 Gujarat Earthquake”