Greetings from Kutch! My name is Diane and I’ve spent the past five months living and working in a rural district of western Gujarat called Kutch. Though not physically separated from India, Kutch is often compared to an island. It is cut off from the rest of the state by water and by vast expanses of salty desert. It is also isolated in terms of language; most of the people speak Kucchi, an unwritten language spoken nowhere else in India. It is common for Indian government officials posted in Kutch to consider the region a “hardship” or a “punishment” posting.
While it is true that working in Kutch has left me feeling isolated, I have found Kutch to be the friendliest and most peaceful place I’ve ever lived. In addition, the landscape and the seascape are often downright stunning. Finally, it is a fascinating place to witness a variety of development issues from migration and industrialization to agriculture, water provision and education.
One of the most disadvantaged groups in the district is the seasonal migrant workers who come from in and around Kutch in search of a livelihood. Most of Kutch’s migrant workers are engaged in salt production, though smaller groups of migrants also engage in fishing, animal husbandry and other activities. The children of migrant workers have no access to formal education during the migration period.
The NGO with which I have been placed tries to establish schools at the sites where migrants live and work. During my time in Kutch, I have been involved in a project to improve attendance at the schools. It has provided me with the opportunity to work in the area of monitoring and evaluation. There are many activities that fall under the umbrella of M & E, as it is often abbreviated; my project falls into the category of “impact evaluation.” An impact evaluation asks the question: “How is the outcome of a program different from what would have happened without the program?”
Before I get into the thick of how to do an impact evaluation, let me tell you a little about the attendance program I’ve implemented.
Considering the low level of financial and human resources of the NGO with which I work, I decided on a very simple program based on psychology. The program consists of giving each teacher a hand-made megaphone and teaching her students a song to encourage them to attend school regularly. Each day, a different student is assigned to bring the megaphone home and to sing the song into it the next morning on his way to school.
While this may seem like an unconventional idea, it makes use of the psychological principles of self-signaling and social proof to create habits and social norms around going to school when none exist. Firstly, the child who uses the megaphone is making an effort to show others that she goes to school. Often, when we exert effort for some goal, we believe ourselves to value it more. Therefore, the child who uses the megaphone and sings the song may come to believe that school is an important part of his life. Secondly, we implicitly think that the actions of other people in our community are reasonable. So if children see another child going to school they may be more likely to go also.
While the megaphone program sounds like it may work on paper, I don’t whether it will work in reality. So, I decided to build “impact evaluation” into the implementation. If the impact evaluation shows that it works, I will recommend the program, or something similar, to other NGOs working in education.
The kind of impact evaluation I am doing to test the effect of the megaphones is called a “randomized controlled experiment.” Like an experiment in the physical sciences, a randomized controlled experiment used for impact evaluation measures the difference between a control and an experimental group to estimate the effect of the program.
Therefore, I randomly assigned the NGO’s 35 schools to either the experimental or the control group, and only implemented the program in the experimental schools. Before the end of the school year, I will show up unannounced to each of the schools and take attendance. I will compare these attendance figures to a baseline measurement of attendance that I took before implementing the program. Specifically, I will try to see whether there has been an improvement in the experimental schools that did not occur in the control schools.
If the megaphone program works, it will be a low-cost way for NGOs and governments to encourage more children to attend school. It will also provide support for the idea that social norms and habits around school-going are an important missing link in the education of extremely poor children.
– Diane Coffey 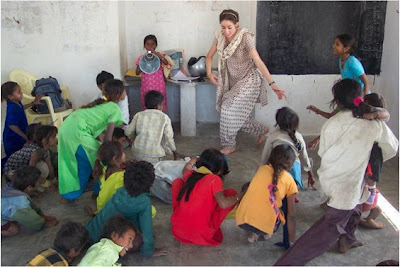