While putting together the content for our upcoming exhibition, Ghadai, I primarily focus on the section devoted to the women’s role in pottery.  We highlight their role in the gathering of materials, different painting styles, and how they play a key role in keeping the craft alive.  The actual making of the pottery is primarily a man’s job.  However, there are a few women in Kutch who make their own potter.  Recently, I was able to interview one of the first female potters in Kutch.

Enter Sarahben.  Sarahben radiates confidence.  The first time I met her she grabbed my hands, brought me in for a hug-one of those full body hugs that strengthens and rejuvenates you- and then she (playfully?) slapped my face.  She wasted no time in showing me her home, her family, and her work.  She works in a small covered area in front of her house where she makes her clay, creates her pieces, and paints her pottery.  There is always a group of young children surrounding her, watching and learning. 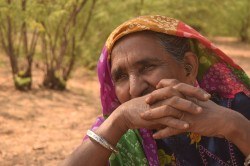 I started pottery when I was 13 years old.  No one taught me this work, I taught myself.  Everything I made was from my heart- plates, sanak, takab, tapla, everything.  In the beginning my father-in-law said no when I wanted to go out from the home, but, I explained that I also have a responsibility to go and earn for the family.  I went, I earned, and my family was happy after that.

Most women associated with pottery only gather and make the clay and then paint the pottery after the men have thrown, created, and fired pieces.  Men dominate the pottery creation role.  But, Sarahben does everything.  She makes her own clay and then throws, creates, fires, and paints her pieces.  Not only is she regarded as one of the best pottery painters in Kutch, but she is also a national award winning potter. 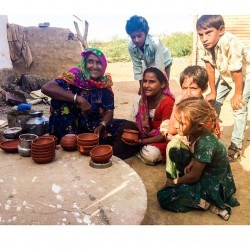 I taught my daughter, son in-law, and brother in-law’s three daughters pottery.  Their painting skills are awesome….I just visited to Boroda, Ahmedabad, Surat, and Bhopal.  There I taught many young students who were interested in learning the craft.

Sarahben lives her life constantly challenging traditional female roles.  She raised her daughter to live the exact same way.  Parsaben continues her mother’s legacy as a female potter in Lodai.  She moved there when she was married to live with her new in-laws.  Instead of working in the fields with her new farming family, Parsaben decided to continue working on her pottery.  Because her mother is such a well-known potter, her in-laws fully supported her work, knowing that she would be able to be independently financially successful.

Stay tuned for more on Parsaben on my next blog!

And if you still have not checked out the trailer for Ghadai do it now!

Highlights: Virginia recently graduated from Tulane University where she completed degrees in Public Health, International Development, and Gender & Sexuality Studies. For the past four years, Virginia has been very passionate about work with New Orleans public health involving sex education, reproductive health, and proper nutrition. She was a sex education teacher, a youth mentor, and a global justice intern with a free health clinic where she helped start a farmer's market and led a weekly women's wellness class. She spent her junior year abroad in India living in Delhi and Dharamsala conducting fieldwork on the reproductive health care status of Tibetan refugees.