That Tuesday marked the start of a hearing at the Supreme Court of India, to consider whether to de-criminalize Section 377 of the Indian Penal Code. This is not the first case to consider this — it was decriminalized in July 2009 — but the law was reinstated in December 2013.

What is Section 377? It is a law in the Indian Penal Code that criminalizes ‘unnatural’ sexual activity. It was established under British rule in 1861. Although this law technically applies to heterosexual ‘activity’, it has had the greatest impact on the LGBTQIA+ community in India, through threats, intimidation, and prosecution.

“Whoever voluntarily has carnal intercourse against the order of nature with any man,

Explanations:  Penetration is sufficient to constitute the carnal intercourse necessary for the offence described in this section.”

Anoo Bhuyan from The Wire explains a bit of the history of the legal battle to decriminalize Section 377, since a court case filed by the Naz Foundation (Fellow Akiera Gilbert’s host organization this year) in 2001.

This court case does not exist in a vacuum. In recent days, the Indian Psychiatric Society stated the homosexuality is not a psychiatric disorder, and came out in support of the decriminalization of homosexual sex. The decision has yet to be announced, but the LGBTQIA+ community in India and elsewhere awaits.

Why Do I Write This?

Why do I write about this case? Why am I so excited to see the potential overturning of an outdated colonial law that came from leaders of the land of my own ancestors?

I did not partner with an organization focused on the rights of disadvantaged communities of gender and sexuality minorities. Though some fair trade organizations in and outside of India may do so, I did not work with them.

Even so, I have spent much of this Fellowship year with queerness in the back (and front) of my mind. As in the majority of my professional life, LGBTQIA+ – lesbian, gay, bisexual, trans*,queer, intersex, asexual, pansexual, gender non-conforming, and the infinite other gender and sexuality identities – issues were not the focus of my day-to-day work. I am not yet, though I may one day be, what is occasionally referred to as a ‘professional gay’.

But these are the issues that consume my brain when I let them, draw me in when I approach them. I identify as a bisexual, quoigender (meaning “questioning”, or my favorite descriptor, “what gender even”) person assigned female at birth and socialized as a woman. I go by she/her pronouns but I certainly would accept they/them — I just have yet to decide if ‘they’ are the pronouns for me.

There is a vast LGBTQIA+ community across India and South Asia, with centuries of history. I will fail here to describe or understand a full picture of the LGBTQIA+ community in India or elsewhere, but as I realized this year, it is important to at least try, to start a conversation.

I was fortunate to get to know some members of this community in person, through friends, and online, through social media. The challenges and goals do not begin or end with this or future Section 377 rulings, though it is important. For these communities to survive and thrive, it is essential that spaces exists, off- and on-line, for individuals to come together and connect (this applies to other marginalized groups too).

Who/What Have I Connected To?

First up: Gaysi. Self-defined as “a space where the the Desi-Gay community comes together and shares personal stories, their triumphs and failures, their struggles and their dreams, their hopes and despair. And in doing so, gives other gaysis a sliver of hope too.”

Gaysi is an on and offline forum with content ranging from ‘7 Real-Life Narratives Of Desi-Queers Out At Work’ to Tips for Aspiring Drag Artists. Gaysi is more than a forum, however. They host off-line events, create materials to describe the under-documented and under-disseminated South Asian queer history, and raise awareness. See their Instagram, Facebook, or website.

The organization I connected the most with during my time here is Nazariya, a self-described “Queer Feminist Resource Group.” I first heard of their organization through an event, the launch of a queer calendar. Nazariya partnered up with Intercultural Resources, a ‘Research, Documentation, and Intervention’ organization, for IR’s ‘Social Movements Calendar and Resource Book’.

They created a 2018 Planner documenting the history of the queer movement in India, from 1015 to today, with the stated purpose: “We therefore aim to create tangible material with visual appeal that presents the truth of what happened in the queer movement in an interesting way that can be shared and distributed, forming connections between organizations and individuals.” Described as a “collective process”, the planner includes centuries of history and  artwork created by lesbian, bisexual or transgender artists assigned female at birth.

This calendar is just one of their many, many initiatives to foster space for their community, since they began in 2014. Co-directed by Rituparna Borah and Ritambhara Mehta, one can read more about their beginnings on their website and some of the questions and informational resources they provide on a daily basis on their Instagram. I was fortunate to be able to participate in and contribute to a documentation workshop they held in June for a group of transmen in Delhi, an example of the creative ways in which the organization seeks to connect to and provide resources for their community.

Rituparna too shares an important perspective on the impact of Section 377 in Hindustan Times.

(There is another organization working to raise awareness and foster LGBT spaces with a similar name – Nazariya: A Grassroots LGBT-Straight Alliance)

The Queer Muslim Project too is focused on the creation and collaboration of on- and off-line spaces for members of the queer community in India and beyond. Started in 2017 by Rafiul Alom Rahman, the project is now “a digital advocacy platform focused on creating visibility and awareness of LGBTQ+ Muslim issues in India and South Asia.”

In May, the project held its first consultation in Bangalore to bring together and discuss the experiences of queer Muslims in India. According to The Hindu, “The closed group of 30 include transmen and transwomen, lesbians, gays, bisexuals and people who identify with the cause and want to understand what it means to live as a queer Muslim in India.”

In June of this year, the organization held their first in-person event in Delhi, a Queer Iftaar. My Co-Fellow Minahil Khan introduced me to the organization and the event, after she spent the year learning more about her Islamic heritage and sought out new religious traditions that were more inclusive of other marginalized groups. She and I attended as shared Allies.

With the Section 377 ruling, TQMP released a statement too: 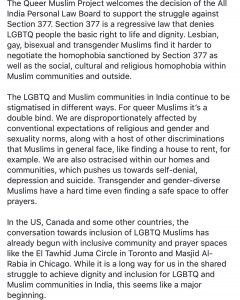 Read more about their organization here.

This is only a small sample of the queer organizations and communities in and from India and South Asia, a few of those that have impacted me this year. There are near endless contributions to a broad on- and off-line community. I was fortunate to come across the work of Artwhoring, Mumbai-based artist Priyanka Paul, who created a t-shirt and public art project to raise awareness of  the harmful aspects of the Protection of Trans Persons Bill, 2016 . The Delhi International Queer Theatre and Film Festival allows the LGBTQIA+ community in Delhi to come together in a physical space and publicly consume queer media. When I went to Kolkata for field work, I heard of Amra Odbhuth Café, a queer feminist cafe space started and maintained by the LGBTQ+ community in the city. There is the work of artist Hatecopy, Maria Qamar, whose piece ‘Str8 Like a Jalebi, Baby!’, inspired the title of this blog.

Why Does This Matter?

From each of the organizations, artists, and communities I came across, peripherally or in-person, I heard, again and again, of the need for a safe space. Aside from legal challenges faced by Section 377, the lack of space to act as one’s self or to be amongst like-minded individuals has an impact on one’s physical and mental health.

As an outsider in Delhi, I felt fortunate to find these spaces to connect to, to feel safe amongst. I am not the main target of these groups or intentional online spaces; I am grateful for the support they inadvertently provided me.

I am not the first AIF Clinton Fellow who is a member of the LGBTQIA+ community, and I am certainly not the last. I feel so fortunate to have the chance to get to know some of the LGBTQ+ community in India and in South Asia  that is working so hard to claim a space for themselves. I feel lucky to have been a part of Delhi’s 10th Pride Parade in November 2017, the first pride march I walked in. I feel lucky for the chance to share this story here.

Kara, a recent political science and international affairs graduate of Northeastern University, fell in love with India during a month-long academic trip focused on the impacts of climate change and resilience efforts around the subcontinent in 2014. She returned the following year to lead the next group of students. Armed with her appreciation for storytelling and journalism experience at an anti-corruption media organization in Bosnia and Herzegovina and for an environmental organization in the U.S., Kara will work with Fair Trade Forum - India and Fair Trade Connection as an AIF Clinton Fellow to amplify the voices of fair trade organizations and their impacts on the artisan and farmer communities around the country.

One thought on “Section 377 Goes Straight to Court”