Chanchala, a Kondh tribal, lives in the village of Nuabandhu, Odisha. Her mother toungue is Kui. The majority of the Kui-speaking Kondhs live in the hilly and forested areas of south and central Odisha, especially in the undivided districts of Kondhamal, Koraput, and Kalahandi. [1] She lives with her two sons in her husband;s extended family’s house. She works as a daily wage laborer. Getting work is uncertain and dependent on the seasons. Ganjam is an agriculture dominated district, with the majority of the population relying on agriculture as their primary occupation. People employed in agriculture do not find employment throughout the entire year, though. In times of less work on the field, they drift into other occupations where they do contractual work. Construction is the most preferred alternative employment option. People work both as farm and construction laborers as per the opportunity and need. [2] 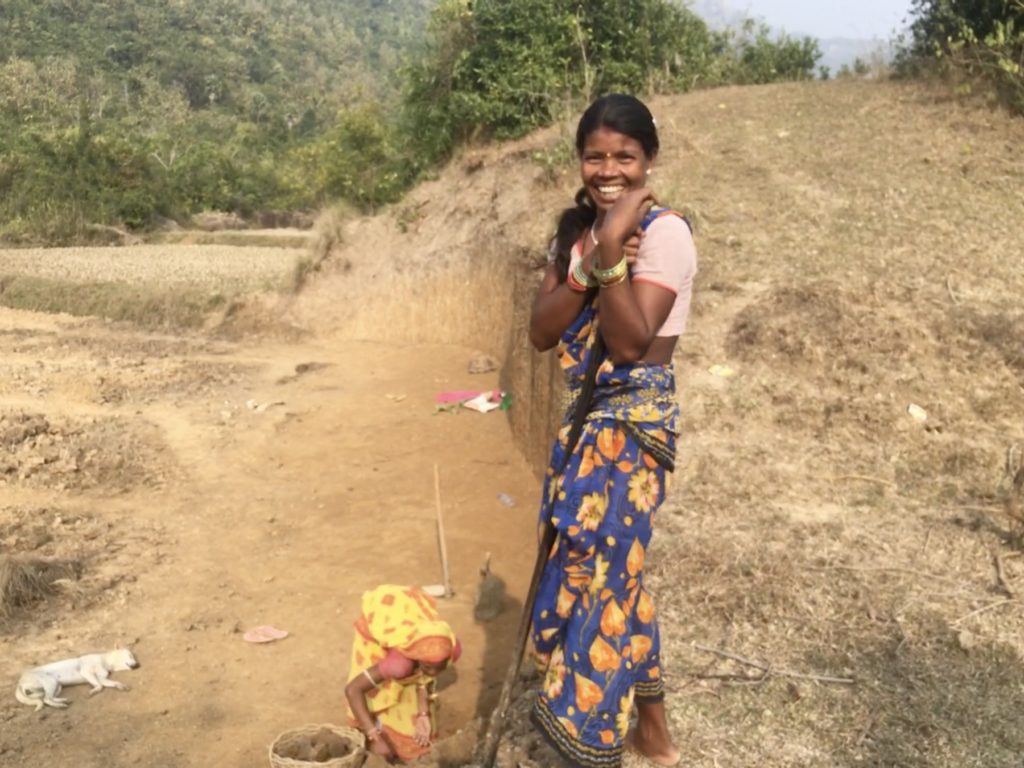 For instance, the planting and harvesting season brings work for her as a farming laborer, since she is landless. She remains unemployed otherwise, apart from few a chances to work at a road construction site or soil cutting around the village. She was the last child of her parents. After her birth, they both died in an accident, so she was raised by her relatives. She did not get a chance to attend the school as the relatives were least bothered about that. Instead, she is the bread earner of the family. She runs her family with two kids who go to the nearest school, which is 3 km away from her village. They both are very young and it becomes very difficult for her to handle them after coming back from work in the evenings.

Her husband abandoned her after he migrated to the city. He does not support the estranged family financially. He also tried to throw her out from their house, which is one single 8×6′ room. He wants her to leave the property with the children. He abuses her physically whenever he comes for the vacation in the village and puts a constant pressure on her to leave the house. She feels more vulnerable as she doesn’t have any family to go back to. She says that she suffers all the hardship and violence as she doesn’t have any other option.

She also gets afraid at the idea of getting out from the village to work in the cities where she can get more work. She is frightened to do that as she feels that the environment out there is very dangerous for a single woman.

We have a lot of documentation on how a woman’s life changes when the man of the family migrates, in terms of her decision making, since she gets to play a more empowered role in the family. Scholar Jetley (1985) who revealed that in spite of long absence of males there is little change in the authority structure of the family, and major decisions regarding purchase of household item, cattle, inputs or land, credit, expenditures on ceremonies, etc, are postponed till the migrants’ visit. [3] Women, however, take decisions on problems regarding the daily subsistence of the family, and keep it from slipping into deeper poverty. [4] Whatever wages the women get are of use value whereas the migrants’ remittances have exchange value. Thus, the power base remains with the males. [5]

The longer the duration of stay of the migrant in the city and the greater the distance between his home and place of work, the weaker are his ties with his rural family and the greater the insecurity of the woman at home. [6] This is also one of the changes she experiences when her husband’s romantic interest get into someone else and how it affects the relationship between both of them. Here Chanchala is the example of this devastating effect of migration on women and their marriage life.

Sahana is serving as an American India Foundation (AIF) Clinton Fellow with Voluntary Integration for Education and Welfare of Society (VIEWS) in Gopalpur, Odisha. For her Fellowship project, she is supporting women self-help groups in launching social enterprises focused on organic farming practices to popularize the use of organic versus chemical fertilizers in the region. Sahana is a 23-year-old woman passionate to work towards gender equality. She has completed her Master’s degree in the discipline of social work with a specialization in rural development, mental health, disability, and counselling. She also holds a Bachelor’s degree in political science. She has interned with Roshini, working with government school adolescent girls on life skills and creating a module on cyber security. She has also worked for the community in a slum in Delhi called Seelampur on different issues including gender, livelihood, education, and disability as part of her social work degree course. She was a part of the Youth Accountability Advocate (YAA), working towards understanding the needs of young people on sexual and reproductive health and rights. As a YAA member, she has been selected by the ‘Women Delivers’ in 2019 to share her experience and learnings in their international conference in Vancouver, Canada, with more than 8000 participants from all over the world. Sahana has been actively volunteering for an organisation called Pehchan for girls education in the peripheries of New Delhi. With AIF Clinton Fellowship, Sahana aspires to gain in-depth knowledge of the diversity in socio-economic, cultural, and educational fabric of India. She aims to hone her skills and build perspectives of working and solution generation in development sector.

2 thoughts on “She: The Invisible Bread Earner (Part II)”