She walks with me.

It’s about 5:30 p.m. on a weekday and people are wrapping up work on the campus. I have one last email to send and half way through typing I receive a phone call –

“Hello! Are you coming?”

Within a few minutes (certainly more than 5 as in accordance with Indian Standard Time) I scurry down the winding concrete hill to meet Selvi at the gate. As always I am greeted with a smile, gentle laugh, and another enthusiastic “Hello!” Selvi is one of my co-workers at Keystone Foundation and she plays role in both in the Community Wellbeing and Water Program. She is also a Kotagiri native from the Kurumba tribe, thus she knows the hills and their various zigzagging paths quite well. About 3 days out of the week I accompany her on evening walks that usually last about an hour and at a proper quick pace.

She walks with me. And I with her. Of course small chat ensues to disrupt the monotonous ‘step, step, step’ of our feet smacking the pavement or the various song spurts of several bird species perched overhead. Often, the chats are merely small talk. Your usual: “How was your day?” – “Good” – “How is the project going?” – “A bit stagnant at the moment…” – “How is your family?” – “They’re fine. Recently my sister…”.

There are also moments of silence, the in between of self-reflection and wandering along the endless waves of tea bushes. After a while the stories finally commence. Quietness and small talk slowly trickle into sharing memories, exchanging thoughts, and exposing dreams. I have shared much with her – the past, present, and future – but her story is one I want to share with the broader community, the world in fact…

Selvi was born and raised in the Kurumba tribe and the name of her village is Selarai. The Kurumbas are revered, sometimes feared, by the other indigenous communities of the Nilgiris because they are believed to be capable of magic. This magic the Kurumbas have often derives from their being in tune with the forest, such as knowing the specific plants to make specific medicines for specific ailments. Other tribes believe that they are also capable of black magic, such as destroying crops without the use of their hands. Who knows? I do know that Selvi seems to have her own subtle magic, a way of knowing, such as affirming her husband got his job in Sweden just before the company confirmed with him. Who knows?

When she finished high school or 12th standard she did not go to college. She didn’t feel the need and had no desire to sit for hours on end, for several years to come, in more classrooms. Instead, she went to the tea fields for wage labor and worked there for 5 years. Gathering tea is an intensive labor process that involves being bent over for hours gathering baby tea leaves in the heat of the day; the mountain air may be cool but the sun is direct and hot. One day a friend mentioned to her about this new place called Keystone Foundation and that they were teaching people how to make candles. She had never heard of this place before and definitely did not know how to make candles. And she decided to give it try. What at first was only a workshop became a new job and she has been with Keystone since.

The initial years at Keystone had some painstaking moments – she had to start learning English and computer skills; and certain coworkers, like Sam (who became a dear friend), pushed her to learn quickly and rebuked her when he thought she didn’t learn fast enough. Slowly but surely she became fluent in English (side note – she was already fluent in Kannada and Tamil as well as spoke local indigenous languages – Kurumba, Irula, Badaga – and understood pieces of other local languages) and improved in her work at Keystone.

The work Selvi has done with Keystone has developed and changed alongside the progression of this foundation. She began as an assistant in the marketing sector, even before Last Forest was established, then after 2-3 years moved on to other projects more related to the people of the Nilgiris. She helped lead census of the Kurumba tribe and visited nearly every village. She documented sacred groves and brought elders of the Kurumba and Irula tribe to Keystone’s Campus in order to discuss their culture and traditions. She helped implement the indigenous newspaper called Nilagiri Seemaisudhi as well as the community radio, in order that local news could be networked across the villages of the Nilgiris. She has supported the revival of crafts with the Toda, Kota, and Kurumba tribes. She organized Kurumba artists to come to government schools and teach children their painting style. She has done much, so much, and this is only a few examples.

Also through Keystone, she began to travel for work outside the bounds of Kotagiri. She went for a meeting in Chennai and met someone named Nils who was from Future Earth, an international research initiative to provide knowledge and support in regards to transforming to a sustainable world. She needed help with acquiring a Swedish visa for a conference, and he, being from Sweden, aided her through the process. A friendship was sparked during this brief interaction. When she came to Sweden there was hardly any interaction, aside from a few formal emails and a quick hello. Years later he returned to India, this time to Nilakottai for another Future Earth meeting, which Selvi so happened to attend on the behalf of Keystone. During the meeting that friendship that had sparked began to kindle into something more. Neither person admitted it at first, yet deeper feelings for the other began to take shape. Once home, Selvi called Nils and they spoke for hours for 2-3 days and finally came to one conclusion – to get married!

She was the first woman from her village to marry a foreigner. Before Nils she was the first woman to live in a home outside her village (one she helped design and construct through Keystone). She received much backlash and reproof from not only her tribe and community but others as well. To leave the village is one thing, to marry outside the tribe is a much more serious matter. In some cases, among different indigenous communities, to marry outside the tribe means you risk being banished from that village. Selvi knew of the consequences before making these choices and still she chose them. While telling these parts of her story she smiled and said matter-of-factly “I want to progress”; simple as that. Nils has returned to Sweden and she plans to join him in about a year or so, likely making her the first woman from her village to live in another country.

These stories have come in bits and pieces, and after several evenings I have put together the puzzle of her narrative and the picture is incredible. She continues to inspire and awestruck me by her powerful life story, and the straightforward way she presents it. This is her life and it is simple is that. She walks with me. And I am far better for it. 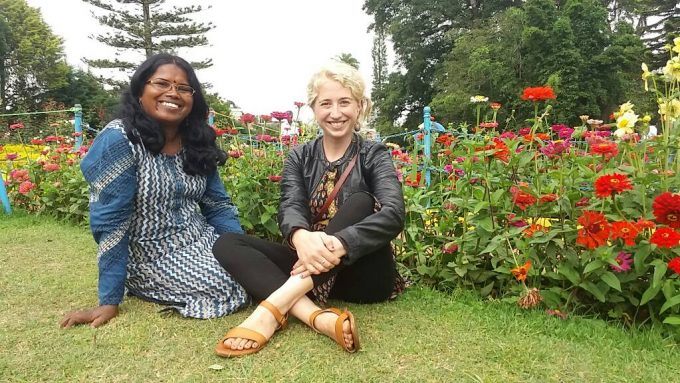