A favorite topic of us fellows is the endearing, clever, confounding, earthy, and, above all, unique character of Indian English. “To shift” means “to move” in the sense of moving locations, to another apartment or city, for example. The topic of this post will be about my very recent (yesterday, 3 March 2011) shift to Jagori Grameen (website here) near Dharamsala in Himachal Pradesh state.

I think that it’s appropriate that the Indian term ‘shift’ saturated my mind, since the kind of subconscious acculturation to Indian life surprises me often. I was struck by the, well, foreignness of the foreigners on my car (my first ride in 1st class!) from Delhi to Pathankot, the nearest train station to Dharamsala. I felt comfortable in the absolute chaos of the Old Delhi Railway Station and casually mixed in a good portion of Hindi to the auto rickshaw driver and others along the journey to my train berth. I was delighted to sit down to a delicious train meal of raita, paalak paneer, and veg. biriyana, which I dutifully ate with only my right hand, as per custom, even though no one was watching me. A few of my travel companions came from the foreign Buddhist community/ecosystem that supports and interacts with the tourism industry and the Tibetan community in exile near the Dalai Lama’s home in upper Dharamsala, Mcleod Ganj. Their immersion in that world showed me to what a measure I had become immersed in mainstream north Indian life. I knew that this shift would be much easier than my initial arrival to India.

The process of changing fellowship assignments is an awkward one at AIF, as any severance of working relationships is. However, I am confident that my decision will be for the best, as I prepare to work on my favorite topic, agroecology and the science of sustainable agriculture generally with the community around Jagori Grameen, which includes diverse households of Pahari, Panjabi, Hindi-speakers, Tibetan exiles, and others. And since Jagori is a women’s/feminist NGO, I’ve arrived at an auspicious time, just before the UN’s International Women’s Day on March 8. Oh, and the Tibetan New Year celebrations occur here on Monday, March 7. I think that my timing was rather impeccable, in fact.

So as I shift, I begin to see the other side of the fellowship, as we are entering the 7th month, with the three-month remaining point looming on the calendar. Chat and Facebook conversations among fellows are turning toward last minute travel detours in India and future careers. Future posts will focus on my role as a social-ecological relations–natural resource development–environmental professional expert/guy at a grassroots NGO started by Abha Bhayia

As always, I will conclude with some photos for your enjoyment.

The stray dogs on my block in Udaipur had puppies. Apropos to nothing…but cuuute! I’ve become indifferent to much of the feral animal population, and have really changed my attitude toward their role. If nothing, they control the organic waste that the human population produces in the way that government can or will not do.

A hike on a nature trail around famous Sajjin Garg, or Monsoon Palace. One of those things that you postpone when you live in a city.

Monkeys in a tree.

The natural history portion of this month’s post: the Euphorb (not a cactus, family Cactaceae, people, those only occur in the New World, except where introduced) that many Rajasthanis use as a living fence. In bloom…beautiful.

Badi Lake seen from the trail.

The view from my new home…mountains and menacing clouds, as the final cold spell before Himachali spring and summer take over. The rhododendrons will begin to blossom, signaling spring.

A stray cow eating a pile of geraniums. Probably an effect of the wedding season currently going on and an only-in-India sight.

The river that I will cross (by foot bridge) to get to work at Jagori Grameen.

Nishtha, another community organization in the area, affiliated with Abha, my mentor, I believe. The felicitous side effect of living in a beautiful area is that educated, powerful people set up social movements there. The greater Dharamsala area has an intensely cosmopolitan and socially active feel for such a rural place in India.

Adapting to the New Normal during COVID-19 as a Fellow

Do Too Many Cooks Spoil the Broth? 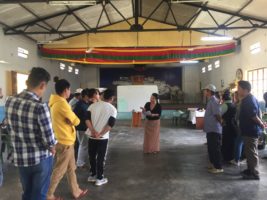 Meet Tsering Kyi: An Inspiring Woman Leader from the Tibetan Community in India