This past week weekend was the best I’ve had so far in Jharkhand. It was a powerful reminder of why we AIF Clinton Fellows are here: to see the programs we’ve only read about in action, and to better understand the people, places, and institutions that form the landscape of the social sector. And for my own benefit, I’m writing this blog to renounce my know-it-all tendencies by reminding myself of all the things I didn’t notice or ask about in my first five months here.

I woke up early on Saturday to meet my supervisor, Neha, for a dosa at the local hospital canteen. After stuffing our faces with 1.5 dosas each, we began our 9-kilometer trek from Kolari to Gargari, a neighboring village, to visit a local temple that required a short hike up a mountain. By mountain, I of course mean medium-sized hill, but a trek nonetheless. Inevitably the real adventure was the journey.

Our first stop was a local government school in Kolari. I’ve been attending football practices and workshops all term, and some of the kids recognized us as we walked by their campus during morning exercises. A teacher invited us inside to take a look, but to avoid disrupting the session, we said a quick hello and headed out.

Just outside the school, we came across a group of seven older women filling out paper forms. Neha guessed (correctly!) that they had formed a self-help group under the Indian government program Mahila Samiti. We asked what they were doing, and they shared they were deciding who would receive the next loan from their pot of savings. I tried to ask what they were saving for, but my Hindi was incomprehensible. Classic!

After a short conversation about savings, we continued through Jharkhand’s expansive farmland. Neha pointed out that the blankets covering fruit trees were actually to prevent jealous thieves, and not to keep the fruit warm as I had assumed. I had no idea.

I noticed that many signs, all in English, throughout our walk were advertising the sale of local land to real estate developers. Neha explained that in many cases, families sold their ancestral farming land to developers, who end up severely undervaluing the property, building, and selling them again to Ranchi’s burgeoning upper class. No surprise that gentrification is everywhere, or that ‘development’ in this community in no way includes the people who actually live here. Neha believes that the people who sell their land, after using the money to build a cement house or new motorcycle, will likely end up working as maids and security guards on their own land in the next ten years.

About an hour and four villages later, we finally reached Gargari. I often travel by school bus or auto, so I’d never noticed the village dairy cooperative. Neha explained that large dairy companies often set up pasteurizing centers in villages, so that they don’t have to keep their own cows. Villagers bring their cow milk to the center each day to be pasteurized and processed for shipment to a factory. I had no idea that the milk we drink was actually produced locally, and all without the guise of social enterprise.

Soon after, we stopped at the village Panchayat office, and as I struggled to read the road-side sign, the Mukhiya called us up for a chat. The biggest shock of all? The Mukhiya was a woman! Neha had met her before but thanked her several times for her ongoing support for Yuwa. She brought us to a local meeting, where the Panchayat board discussed land sales and other local issues.

From the Panchayat’s office, we hitched a ride on a tractor for the last 10 minutes of our journey to the trail head. A few Yuwa students live at the base of the trail, so we stopped in for a quick visit and chai. Their elderly grandmother told me that my education wouldn’t save me from getting beaten by my in-laws for not knowing how to do proper housework. Honestly, she may be on to something there. After seeing her rely on a cane to walk around, I was shocked to observe the agility with which she yielded a large garden hoe. She was shocked that I couldn’t understand most of what she said in Sadri despite my ability to say “No” when she asked if I could understand her.

Five hours after we began, we started and finished our trek to the mandir in less than an hour. We were passed by several young girls trekking down the mountain with heavy bamboo sticks balanced precariously on their heads. The sticks are for cooking fuel or construction. Neha affirmed that she had had similar chores growing up and that the task was indeed tortuous. 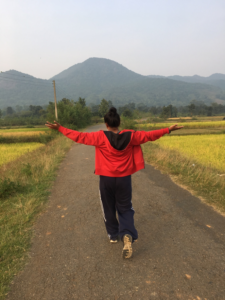 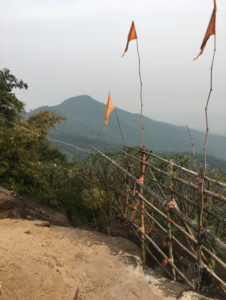 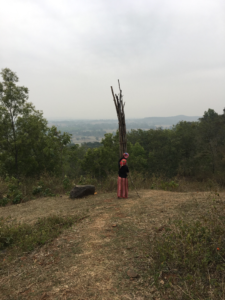 With the aid of a tractor and two auto-rickshaws, we made it back to where we started in just 30 minutes. Neha showed me some of Jharkhand’s awesome street food—channa and peanuts quick roasted in sand. I don’t know how that’s even possible but I swear, it happened, and there was no sand in my food.

The story ends here, with another reminder to all (but mostly to myself) to ask questions, talk to people, and stay curious.

Jane is serving as an American India Foundation (AIF) Clinton Fellow with Yuwa in Ranchi, Jharkhand. For her Fellowship project, she is developing a life skills curriculum for adolescent girls from vulnerable backgrounds around sports-based training to enhance education, build confidence, and improve health. As a student of economics and politics, Jane has been captivated by the beauty and complexity of India throughout her college years. She first traveled to India in the summer of 2017 to work with a social enterprise in Delhi. She has participated in a variety of India-based projects, including working as a research assistant at her university’s Delhi Jal Board Yamuna River Project in New Delhi, co-launching an apparel brand with young female entrepreneurs in rural Uttar Pradesh, and working for a Delhi-based environmental action group to evaluate sustainable solid waste management practices. She interned with the United Nations ESCAP to research women’s entrepreneurship in the informal sector, and participated in the U.S. Department of State’s Critical Language Scholarship to study Hindi in Jaipur. She is ecstatic about better understanding localized approaches to gender equity and development by serving on the AIF Clinton Fellowship. Ultimately, she hopes to become an expert in poverty alleviation in South Asia and to work in policy implementation by identifying best-practices, promoting accountability through monitoring and evaluation, and collaborating with governments to improve social protection for the most vulnerable.