At the end of my most bizarre week in India, I’m finding it difficult to express my jumbled emotions. The week has been nothing but constant contradictions, the most significant of those being my village’s most festive yearly celebration set against the tragic, solemn backdrop of the recent attacks in Mumbai. As I witnessed nearly a million people flood my rural town (pop. 15,000), I was simultaneously giddily happy, confused, and anxiously anticipating the festival’s events.
Watching thousands of people passionately dancing amidst a rainbow array of powders and waiting in line at the temple, I found myself surprised at how exciting and wildly colorful the festival could be in light of the recent news. I wondered if the exaggerated (yet normal) festival chaos was a way to cope, a symbol of defeated desensitization, or a courageous display of extraordinary resilience… or perhaps a mix of all three. 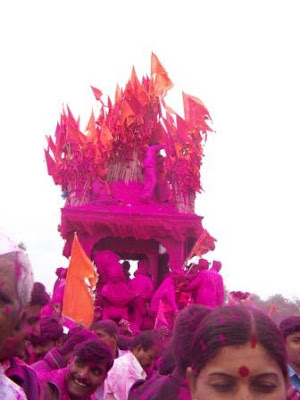 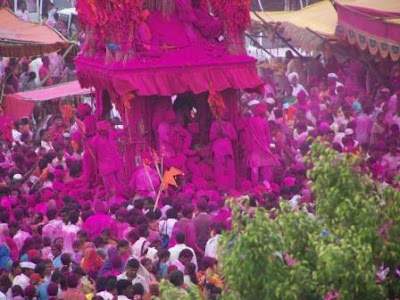 The chariot, completely covered in pink powder,
carrying the local deity around Mhaswad

If I’ve learned nothing else from working at an Indian NGO, living with a family in the middle-of-nowhere Maharashtra, and being the only foreigner wandering around Mhaswad, the one thing I have learned is how to really adapt and integrate. From finding the connection between human rights and microfinance to eating with my hands to understanding people who speak only Marathi, I feel I’ve made a comfortable work, home, and social life for myself.

It was in this spirit that I wholeheartedly flung myself into the festival. Wrapped in a brand new cream colored sari, I lost myself in song and dance, and from a distance threw pink powder-filled coconuts to a chariot as an offering to the local deity. I emerged from the throngs of people with a renewed sense of exhilaration, and my sari, hair, and skin stained pink. 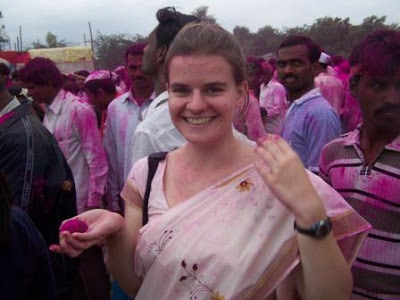 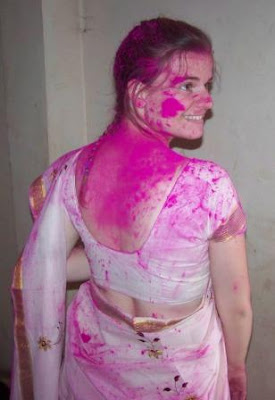 It was then that it dawned on me that the festival’s spiritually energetic atmosphere was not a contradiction to the somber news. In fact, after talking to numerous people, it became apparent to me that the overall attitude, music, chanting, clouds of pink powder, and sense of unity gave people the strength, hope, and courage to cope and eventually move on. As I immersed myself in Mumbai’s updates later that day, I found that the festival had the same effect on me too.
-Suzanne Rizzo