Below are remarks given by AIF President and CEO Alex Counts at the beginning of the Symposium on Maternal and Child Health held in partnership with Stanford Medicine on October 14, 2016. The brainchild of AIF board member Diaz Nesamoney and actively supported by Co-Chair Lata Krishnan, the convening built on an earlier symposium held in Boston in 2015 with leadership provided by AIF board member Dr. Venkat Srinivasan and AIF trustee Dr. Sunita Pereira. Alex will publish another blog related to the six MedTech award winners recognized at the Symposium. To learn more about the symposium, search Twitter for #StanfordAIF. We are grateful to the staff at Stanford Medical School who worked with us to make this happen, and also to AIF staff members Bhawna Chawla, Preena Soni, Luz Pacheco, Drew Foxman, and especially Charu Johri and Sahiya Mamta Mahato (who travelled from India to participate and speak) for their essential contributions. In addition, having actress and activist Madhuri Dixit and Dr. Shriram Nene take part in the symposium was a major factor in its success.

Good afternoon, everyone. I am so pleased that you have joined us on this rainy Friday in northern California.

One of the reasons I concluded nearly three decades of exciting and meaningful work with Nobel laureate Professor Muhammad Yunus and joined American India Foundation as its CEO six months ago was to focus my work on a single country that I love – India – and join hands with great universities like Stanford, people like Priya Singh of Stanford Medical School and Diaz Nesamoney of AIF’s Board of Directors to do something vitally important: shine a light on things that actually work in addressing humanity’s biggest problems.

So I am thrilled to be with you here today.

This conference stands on the shoulders of one we had last year in Boston that also focused on maternal and child health in India. The champions of that effort, including Sunita Pereira and Venkat Srinivasan, delivered great content about effective solutions. But our megaphone was not big enough to get the good news out as far as we wanted. So we decided to bring this convening west and team up with one of the great medical schools in the world.

The American India Foundation has been in existence for 15 years, and it works in three domains: economic development or livelihoods, childhood education, and public health. Today we will be focusing on our public health work, but I urge you to visit www.aif.org to learn more about our other programs.

MANSI is our signature public health program that I visited in May – a visit that was very eye-opening for me, where I witnessed how well this pilot program has succeeded and what the potential is going forward. Here is a short video on MANSI.

Now let’s take a step back and think about India as a whole. Despite two decades of remarkable progress, there are some 700,000 neonatal deaths in India each year, and 45,000 maternal deaths. The neonatal mortality rate is worse than Bangladesh, or even Malawi. Malawi? Come on, India, you can do better than that!

Five years ago AIF decided to try to do something about this massive problem. Many ideas were debated. Should AIF try to advocate for a massive increase in government spending on the current health care system, or try to raise a large amount privately? Should we focus on developing some breakthrough technology that could change the face of rural public health? Should AIF work alone, where it could control its program, or pull together partners?

Ultimately, the decision was to create a public-private partnership to enhance the performance of existing public health resources. Our coalition’s hypothesis was that the building blocks of progress were already in place, and that better execution was the key.

For me, rural health care is deeply personal, for two reasons. I saw with my own eyes what research has long documented: that quite a few women who achieve economic progress through strategies like microcredit fall backwards into poverty due to a family health crisis. Secondly, during the years I lived in rural Bangladesh, I shared, not just the lives, but also the diseases of the poor. I experienced malaria, typhoid fever, and dysentery firsthand. I know what it is like to be very sick and to be far away from the nearest medical clinic.

Now, let us step back for a moment. In this country, at this time, and especially here in Silicon Valley, when we contemplate societal problems there is a strong tendency to think that the solution is innovation, which is to say, doing something differently.   Often it means technological innovation. Solutions come in the form of devices and apps.

While I don’t want to minimize the power of technology, I believe this thinking has gone too far. It has impacted how humanitarian organizations think of and market themselves. I challenge you to find a non-profit that does not claim to be at the leading edge of technology innovation. Folks, we can’t all be far above average!

I would like to suggest that we create some more space for valuing things like incremental progress and competent execution. Or perhaps we can simply redefine innovation as something that improves the performance of some asset in addressing a problem, regardless of the choice of technology or whether it is “new.”

Can I say such things in Silicon Valley? I hope no one is calling security to have me removed!

So this brings us to the MANSI program. AIF and its partners – including Tata Steel Rural Development Society, SEARCH, and the government of the state of Jharkhand – had a hypothesis that the country’s 900,000 Accredited Social Health Activists, or ASHAs, were performing far below their potential due to lack of adequate support. We could have written white papers about this and made recommendations to the government. But instead we decided to roll up our sleeves and test our hypothesis in the field.

We picked 167 tribal villages and gave the ASHAs (who are known as Sahiyyas in some parts of India) high quality training, supervision, and ensured that they were resupplied quickly when needed.

Training was the most important element. Think about the best training you have ever got in your life. Well, our team delivered training that good.

What happened as a result? Neonatal mortality decreased 44% over five years. The rate of institutional deliveries increased from 21% to 70%, representing a huge behavioral change over a relatively short time period.

Folks, this is not magic. This is not rocket science. It’s just plain old good public health.

Now we are headed into phase 2, where we will expand from 167 villages to about 1,700, and from one state to three. To prove that this pilot was not a case of “beginner’s luck,” we are putting together the team and financing that can ensure outstanding execution on a larger scale. I must say, I thought fund-raising for this expansion would be a slam dunk, but it has not been so far. But we will get there. Maybe having a platform like this symposium will help us attract the support we need.

We are already thinking through Phase 3, where we grapple with the challenge of increasing the productivity of all 900,000 ASHAs nationwide.

The stakes are huge.

If we could replicate the results in Jharkhand nationally, about 320,000 children’s lives would be saved each year. That’s almost 1,000 per day. That means 320,000 children who would have a chance to live a healthy, productive life and contribute to society. They could achieve in academia like Priya Singh, in business like Diaz Nesamoney, in public health like AIF’s Charu Johri, and innovate like the MedTech Award winners we will recognize later in the day.

In the one Indian language I know – Bengali – the word ASHA means hope. I know you will feel more hopeful as you learn about MANSI and also about the other strategies and programs that will be presented today.

Thank you very much. 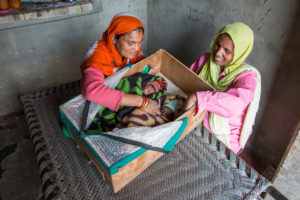 The ASHA, Poonam Didi, Taught Me How To Extract Breast-milk And Spoon-feed My Babies…

One thought on “The AIF-Stanford Symposium: Shining a Light on MANSI and Other Programs that Work”