Looking around at my smiling and laughing colleagues sitting beside strangers, each passing around a mixture of art supplies, I felt my first ting of pride.

Crayons, paints, and colorful markers were being tossed around, while the smell of spray paint lingered as others experimented with street-art-esque work. What started as a group of colleagues sitting in the grass of Jantar Mantar, grew as families curiously approached. In one of those beautiful, warm exchanges that seem so common here in India, instead of turning a cold shoulder to strangers, we welcomed the curious families and playful children into our group. Sharing art supplies, we explained why a group of fully-grown adults had taken residence in the park for a day. We were drawing and painting and photographing for what would become the start of a new girls’ education online campaign. My campaign. 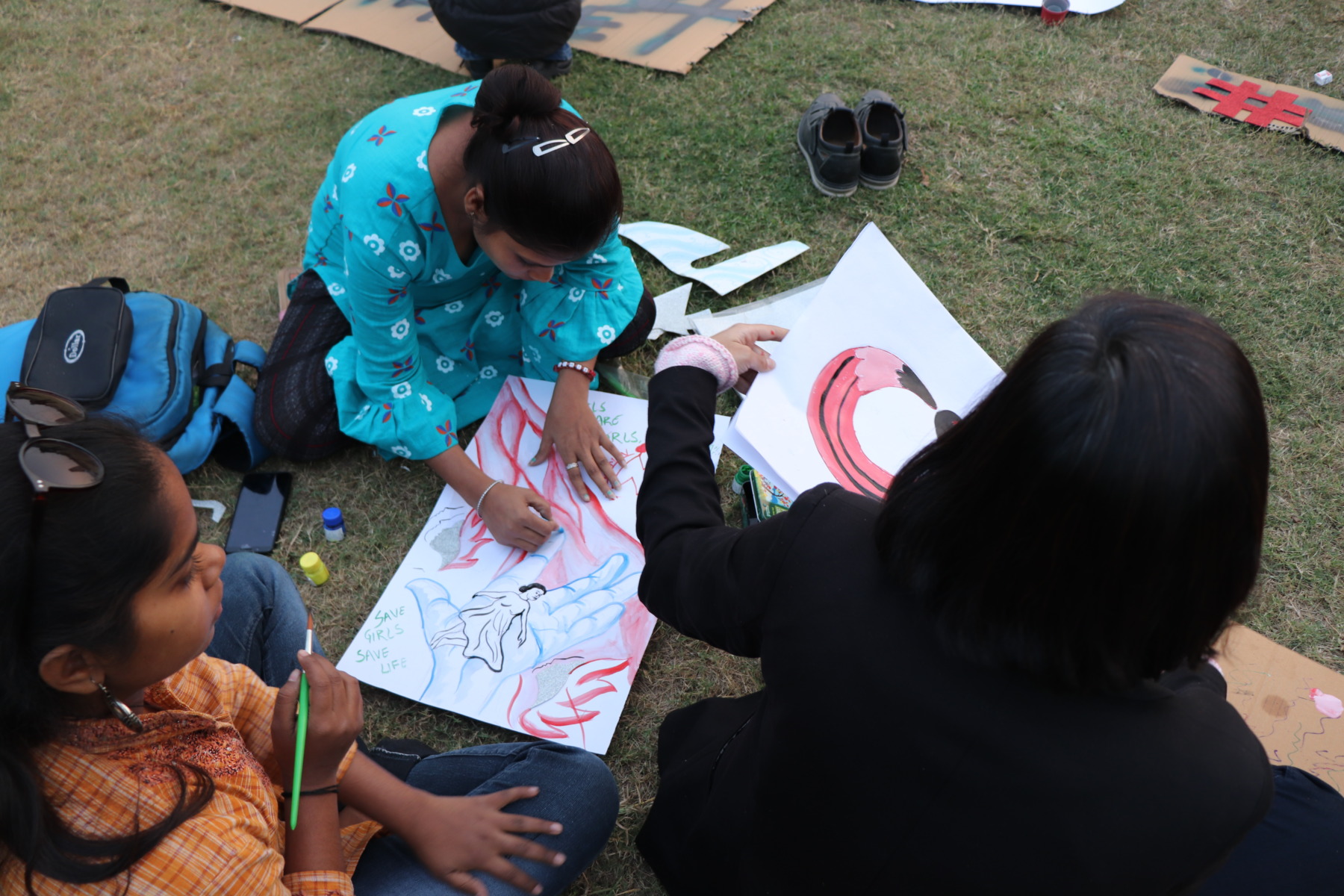 The first half of my American India Foundation Fellowship has largely been involved in designing a nonprofit fundraising and advocacy campaign. TYCIA Foundation, my host organization, works on a variety of education projects across four states. For the past three years, TYCIA has worked on a mass enrollment campaign in Madhya Pradesh with the Korku tribe, bringing 3800 students into government schools after long absences. For some students, the enrollment campaign brought them into government schools for the first time. When I arrived, the enrollment work had just ended, and TYCIA hoped to start a new program that focused on keeping girls in school by reducing dropouts. Day one, I was given the task of getting a fundraising campaign and program design ready to both fundraise and prepare the ground team for the start of a new program.

Within the first month I was given five incomplete promo videos, a program name “Tarai” (meaning girl in Korku language), and one brochure designed by a Mumbai advertising agency. Would this be a crowdfunding campaign? Would we design material targeting large institutional donors? At the time, it was all undecided. However, one thing had been decided, the program campaign, I was told, should launch by Diwali (end of October); that gave me about a month from the start of my fellowship to sort through the details. Spoiler, that didn’t happen as planned. What did end up happening was a total redesign of the campaign. I binge watched successful nonprofit campaign videos, and spitballed endless ideas with colleagues until we landed on the idea of an engaging count to 1000. The redesign (including campaign brand design and technical feasibility) became a three month project of back and forth between videographers, voice over actors, graphic designers, web developers, and my supervisor.

After continued delays and technical hiccups [and many “is it possible to do x,y,z” questions], the campaign launched in January.

1000andyou is a count to 1000 on social media, activating and engaging donors to help us support 1000 Korku girls to stay in school. The count represents the number of girls supported so far and encourages those interested to donate and click a picture with the updated campaign count. As a crowdfunding campaign, 1000andyou flips the focus solely from the beneficiaries and on-the-ground challenges, to create a community of involved Indians hoping to make a difference.

1000andyou is a product of many crumpled pieces of paper, 3am wake-you-up ideas, and many unanswerable questions. There have been weeks of nightly 10pm design phone calls, and many early morning meetings to discuss vision, again and again. It feels silly how items that seem so simple, such as the color scheme, font, and logo, were heavily debated. Very unlike the original idea I was given, the purpose of 1000andyou is to engage with donors, rather than have donors be silent partners. The result is very unlike the idea of “Tarai” which led first with tribal statistics and a matching design. 1000andyou is spreading because of public engagement, bringing donors into the forefront of the campaign. This was a risk and judgement call – not every campaign would/should/does run this way.

If I were being honest, I’d tell you that there have been many moments of self doubt throughout this campaign. But, like that day in the park, I’ve had strangers rally for 1000andyou and our mission. Strangers join the count and post their photos and engage their friends. All for the idea of 1000andyou; what could you do for 1000 Korku girls?

Jessica is serving as an American India Foundation (AIF) Clinton Fellow with TYCIA Foundation in Khandwa, Madhya Pradesh, and Delhi, NCR. For her Fellowship project, she is designing a campaign for educational facilities to increase enrollment and retention of girls from the Korku tribe by incorporating life skills into the curriculum and training teachers. After completing her undergraduate studies, Jessica taught technical theater in the Performing Arts Department at Santa Susana High School. In addition to teaching, she designed a new curriculum, built community partnerships, and secured internship opportunities for students. Jessica participated in the U.S. Department of State’s Critical Language Scholarship program, studying Urdu in Lucknow. Furthermore, with a Foreign Language and Area Studies (FLAS) Fellowship, she continued her Urdu studies at the University of Wisconsin-Madison South Asia Summer Language Institute. Jessica is excited to join the AIF Clinton Fellowship to work with girls. Raised in Southern California, Jessica has always had a knack for storytelling, which has woven together her experiences in theater, research, and data science. Jessica looks forward to tackling her Fellowship project and building upon her studies in urbanization and quantitative research experience.