Dowry (Dahej pratha) in India has very complex and complicated history. It didn’t used to be the tool of exploitation and disaster that it is today. There are in fact no specified sources in India that talk about dowry during marriages until the 16th century (Sahin 2011). Today dowry has become a social menace leading to oppression of women, domestic violence, and a source of emotional stress for the bride’s family and even murder in some cases (Sahin 2011). In ancient India, marriage traditions were very different, there was a ‘Swayamvar’ held where the bride would decide whom to marry (Sahin 2011). The groom had no say in who he wanted to marry, instead it was the bride who would pull all the competing grooms to different contests where the eligible groom had to showcase their potential and the bride could pick whom she liked the most and marry him (Sahin 2011). If this was the kind of importance given to women in the ancient traditions, where and how did it change into a tool to exploit women? In a book called Dowry Murder: The Imperial Origins of Cultural Crime, Veena Talwar Oldenburg tries to answer this question. She follows paper trail followed by British bureaucrats during the colonial rule in India.

Every year 11th October is celebrated as International Girl Child Day, so this year Jagori decided to host an awareness campaign on importance of treating girl and boy child equally. For this we invited Mrs. Neha Dahiya who is a judge at session’s court in Dharamshala. She talked about the dowry cases she has to deal with on a regular basis. She emphasized the importance of the role of society in eliminating this practice. Section 304B and 498A of the Indian Penal Code and the article 3 of the Dowry Prohibition Act 1961 criminalizes giving and taking of dowry. Despite dowry being a criminal offence, it is still widely practiced. This is mainly because the people are unaware of dowry being a legal offence and therefore no one reports it. She also talked about how the birth of a boy is celebrated more than birth of a girl child. She told her own story of how her father fought against the family to get her educated and as a result of that she is a judge in the session’s court today. Her personal story was very inspiring for all the women present. Mrs. Dahiya was herself surprised by the kind of cases that she receives as a judge when it comes to dowry. Very often the cases she receives are so petty and just an ego battle between the two parties; it is really shocking to see people fighting against each other in such manner. The girl’s family is exploited so ruthlessly and often blackmailed with various threats. How it is that people can go to such an extent to satisfy their greed and ego? The household environment also has a big role to play in on the behavior of children. Especially with presence of social media these days, it is very strongly influencing the behavior of kids. Instead of making strong meaningful connections with other people, kids these days are looking for validation on social media from people they don’t even know. Kids these days are measuring happiness by looking at photos on Facebook and Instagram. Mrs. Dahiya talked about one specific case where a girl got in touch with a total stranger over Facebook because the parents were too much indulged in their personal feuds and didn’t pay proper attention to what their daughter was getting into. The stranger she got in touch with trapped her and took her somewhere by deceit and she has never been found since. 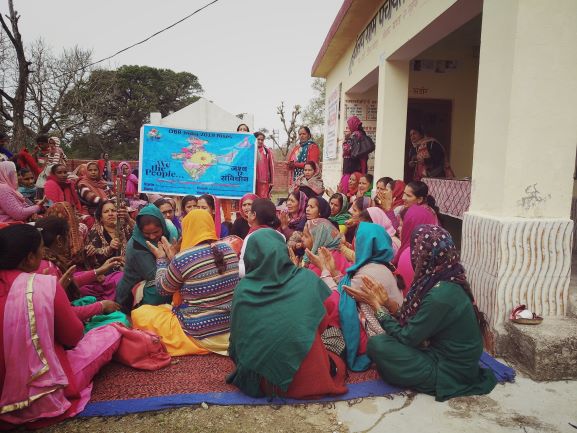 The world has progressed so much today and despite that, there are sex selective abortions. The oppression against women that we see today was never part of the society, it was the consequence of the law and governance that the British introduced during the colonial period that the society adapted to, and that way it became cultural legacy that got carried forward over the generations (Oldenburg 2018). This is precisely the reason why society has a big role to play in eliminating domestic violence and oppression on the women: it all starts with the upbringing of a boy and girl. Right from the childhood, both boys and girls are treated differently in house – why is this? Is it to make the girls more responsible and the boys more dominant? Because if that’s the case, we are succeeding. The message here is not that girls should not learn household work, but in fact both boys and girls both should learn household work. Why only women? Why won’t men learn the household work? Both should be treated equally and in the same case, why are men given more opportunities to study and succeed? Why not women? Both of them should get equal opportunity to learn and excel at what they want.  And this could not happen to anyone, the point to be noted here is how vulnerable and volatile a kid’s mind is to whatever is happening around him/her. The way in which elders talk inside the house also influences the thought process of the child.