I begin writing this entry on Martin Luther King Day and on the eve of Barack Obama’s inauguration. I can’t help but reflect upon my service corps fellowship experiences here in in the context of these historic events. Images of King and footage from his “I have a dream” speech appear on TV, as the sound of wedding parties and howling stray dogs from the streets filter through the windows of my flat. Crowds gather on a cold winter afternoon in Washington D.C to commemorate the life and legacy of Dr. King, as children in Ahmedabad put down their kites and shopkeepers close their doors for the night. As I get ready to tuck myself into bed, I am struck by the smallness of the world and the immense sense of attachment I feel to my home in the and my new home in .

At this moment, the resonance between both worlds is strong. I see parallels between King’s work and that of Saath, the NGO that I have been placed with for the fellowship. During my 10 months in , I am working with Saath to improve access to affordable primary healthcare among the slum communities of Ahmedabad. Like King, Saath embodies perseverance and imagination in its leadership. Because of its persistence over the past 20 years, Saath has been able to elevate slum communities into “equitable and sustainable human settlements.” The NGO has been a pivotal organization to developing the infrastructure of slums in Ahmedabad, and to enhancing the lives of slum residents via its health, education, and livelihood initiatives. Because of its imagination, the organization has been able to envision a better world for the vulnerable populations of Ahmedabad, a city which has a recent history of communal tensions between Hindus and Muslims. Saath, however, has been able to see beyond the politics and prejudices that have become so deeply entrenched. In this respect, it has been visionary in working with both communities. Saath does not focus on the divisions between the groups and the politics involved, but rather places emphasis on their common humanity. They are not Hindus and Muslims in need of the services, but rather people entitled to the same basic human rights and opportunities to succeed. 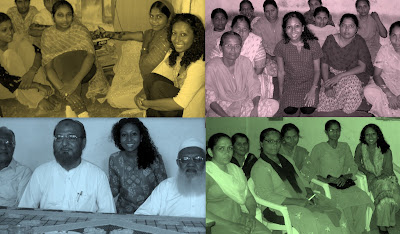 King’s dream also partly takes root in Ahmedabad. It was here that Gandhi conducted many of his “experiments with truth”, which played a tremendous influence on King’s commitment to non-violence and civil disobedience. It was also here that the great Salt March began, ultimately paving way for ’s independence and also providing a model for ’s civil rights movement.

Despite these links, Ahmedabad also signals that we have a long way to go before the dreams of those like King and Gandhi are to be realized. Ahmedabad is one of the richest cities in . Amidst the mega malls, marble mansions, and promises of a new superhighway breathe pockets of abject poverty, many of which have been carved along socioeconomic lines. I grapple with how the government and the society as a whole can have the resources and means to advance the equity and harmony of the city, but yet allow wide economic gaps and bitter intolerances to persist. This situation is not unique to Ahmedabad, but also true of many parts of the world in countries enjoying prosperity and those struggling with scarcity alike. When we have the capacity to eliminate human poverty and misery, it is morally unacceptable that certain groups continue to languish and be denied their basic rights. It is not a lack of human resources, but lack of human will and in some cases willful acts rooted in prejudice and hatred that allow such gross inequities to continue. Moreover, as our world becomes more globalized, our proximity to others only increases and makes it impossible to turn a blind eye to the injustices and suffering endured by another.

I finish writing this entry on inauguration day. At this historic moment of transition, I also turn inwards. The words of our new president have inspired me to take a longer and harder look at our world, and have challenged me to examine how I can do my part better. It will not only take the efforts of our world leaders to address the problems that confront our global community, but the collective efforts of us all. As Gandhi observed, “we must be the change we want to see in the world.” My time in and at Saath also has provided constant reminder of the very simple but often forgotten notion that our self interest and destinies are inextricably linked to that of others.

At this moment, I also reflect on another stage of change in my life. I face a transition point in my time here in . We are approaching the middle of our fellowship. Last week, the 22 fellows gathered for a midpoint conference at Anandwan, an ashram founded by Baba Amte, a man who championed the cause of Indian lepers and untouchables. The ashram serves as a rehabilitative home for lepers and the handicapped to live their lives with dignity. I was inspired not only by Amte’s lifetime work, but also by my fellow fellows and their commitment to service and ability to treat the challenges of their work with tenacity, curiosity, sensitivity, integrity, and humility. As I move from the first to the second half of the fellowship, I have become increasingly more reflective. I suppose such rumination is typical of midpoints and other transition periods that provide unique vantage points to view the mistakes and achievements made in our past, and the wide, open possibilities of our future. In these brief 5 months, I have come a long way and have learned a vast amount, but I find myself asking questions like: Where did the time go? What do I have to show for it? Can I do better and work harder? Have I taken full advantage of living and working in a country as rich and varied as

On this inauguration day, I recognize the hype. A hefty task lies ahead and the expectations are high. I, nonetheless, am taken by the moment. I understand what King meant over 45 years ago when he stood on the steps of Lincoln Memorial to share his dream with the world and described “the fierce urgency of Now.” On this day, January 20, 2009, both the past and future are marked by a man “whose father less than sixty years ago might not have been served at a local restaurant” but who “can now stand before [us] to take a most sacred oath.” Those of our past who fought for a more just, tolerant, and peaceful world are smiling down on us, and those generations of our future will be proud of what we have accomplished. From thousands of miles away, I watch the throngs of people gathered along , waving not only American flags but flags from different lands and peoples. It feels as if the pulse of our planet has just skipped a beat. 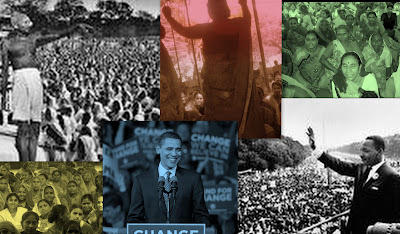 Gandhi, King, Obama, and the women I met
at a microfinance meeting in Ahmedabad.

One thought on “The Fierce Urgency of Now, by Natassia Rozario”