Hundreds of girls squirmed in their seats as they faced the stage under the enormous tent that had been erected that morning, transforming the school courtyard into a performance hall.  They had been at VOICE 4 Girls camp for ten days learning about safety, health, and future planning, practicing spoken English, gaining confidence, working as a team, and much more that I will never be able to fully capture.  To celebrate these accomplishments and bring closure to the experience, they were about to put on a final performance. 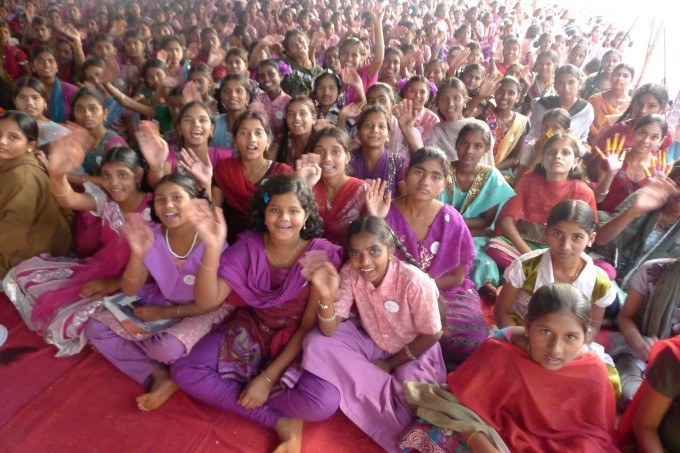 The girls at this year’s winter camp attend KGBV schools, which are residential schools that work with minority communities and families below the poverty line.  While I had heard statistics and gathered information from co-workers on the many obstacles facing these girls, they shared their stories best.

Through skits, dances, songs, and usually some combination of all three, girls addressed topics they learned about during camp.  I beamed with pride at their ability to illustrate such mature topics so creatively and to demonstrate the knowledge and skills they had gained to confront challenges in real life.  My heart also ached a bit as I thought of the charge we were imparting on these girls.  We were asking them to fight to obtain an education, to avoid child marriage, and become independent.  We gave them all the tools, information, and support we could to prepare them for these battles in just ten short days, but ultimately we were telling them that their fate lies in their hands and their ability to convince, persuade, and avoid people and traditions around them in the fight for their futures would mean a world of difference in the trajectory of their lives.  In a way, it felt like we were asking them to fight for their lives, an unfair but necessary task. As they performed on stage, I watched them slip back and forth between childhood and adulthood.  One moment I saw skinny 11 and 12-year-old girls smiling and dancing around the stage, the next moment I saw somber faces that seemed to have aged years while shining light onto issues of female infanticide and sexual violence. 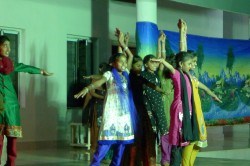 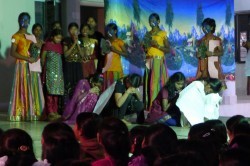 A number of skits portrayed parents not allowing their daughters to attend school and a teacher coming to the daughter’s rescue by convincing the parents to let her go to school, an all too common practice in the KGBV network.  Girls were not only illuminating an issue, but also reenacting their pasts.  Another prevalent theme involved forced marriage attempts and girls persuading their parents to abandon these pursuits, which was a preview of, and practice for, a foreboding future where they wrote their desired endings.  I simply cannot imagine being eleven or fifteen for that matter and bracing myself to avoid marriage in the near future.

With both a heavy heart and newly harnessed inspiration, I cringed as one of the last groups was introduced.  The MC announced that the group would be doing a VOICE beauty pageant, and the thought of girls bringing material aspects and physical looks into focus after addressing such serious issues was hugely disappointing.  The girls turned this doubt on its head though as they proudly strutted across stage sporting handmade sashes with titles like, “Miss Brave”, “Miss Ambitious”, “Miss Confident”, and “Miss Joyful” showcasing what they had learned about true beauty.  I could not have been prouder of these strong young women.  The pageant was a perfect note to leave on.  The girls resembled children playing dress up and make believe, while also embodying a wise understanding of the assaults society would throw at them and the knowledge and courage to combat them.

Tera is committed to public service and a life-long pursuit of social justice. As an undergrad, Tera was immersed in experiences and academics focused on international development, gender equality, and education. She worked in youth development as a crisis counselor at Briarpatch, a runaway and homeless center for adolescents, and in gender equality and violence prevention as the Chair of PAVE, an organization dedicated to preventing sexual assault and domestic violence through education and activism. She then spent two years working to close the achievement gap as a founding 2010 Louisiana Delta Teach For America corps member teaching special education in rural northeast Louisiana. Additionally, Tera has experience in community organizing as a fellow for Organizing for America (OFA). Most recently, Tera has continued this work as the Educator Advocacy Project Manager for Stand for Children Louisiana. In her role with Stand, she worked with educators across the state to advocate for and implement policies to ensure all students regardless of their background, graduate prepared for and with access to a college education. Tera is excited to apply her experience in gender empowerment and education to ensure that girls in India have increased opportunities to achieve their potential.

2 thoughts on “The Final Performance”