It has been said that India is a place where absolute tragedies & unbelievable miracles coexist. This week, I witnessed perhaps the greatest miracle I have seen thus far, when I went into the field to witness the work that the NGO I am working with, Katha, is doing with street children in New Delhi.

The day started out bright & early at 9 a.m. in the slums of Kalkaji. I met the four teachers leading the Tamasha Roadshow, the school on wheels that goes out & teaches these children on a daily basis.

All of the teachers were women in their late 30s & early 40s & had been working for the mobile school for the past twenty years. I hopped on the old, painted van & in my poor, broken Hindi attempted to introduce myself & inquire about their work in these communities. They indulged me & inquired the same. The result of our mutual efforts: a hodgepodge of hinglish, flailing hand movements, long pauses, & giggling at the linguistic barriers in between us.
Despite all this, I did manage to understand correctly that the children they work with are “street children” only in the sense that they do not go to school; they join the workforce very young in life, have parents & are not usually orphans. It seems that most of them live either in the slums or in tents along the highways or nestled by the overpasses.

The five of us tumbled along in that bus, squeezed in one seat, trying our best to communicate & relate. 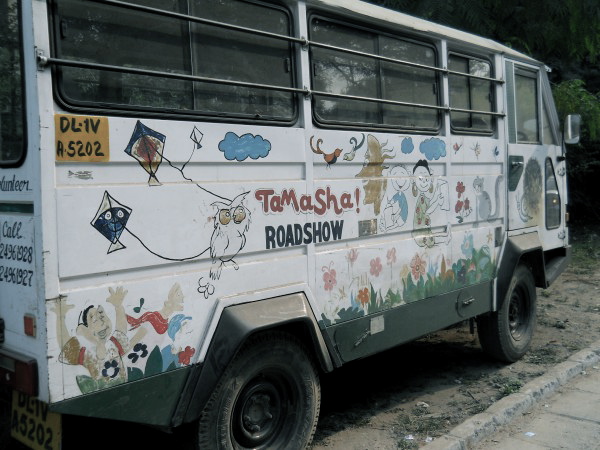 Our first stop was a small slum community near a large school. As the bus came to a halt, we were met with two barefoot children who squealed with elation upon our arrival. They hopped onto our bus & after they took their seats, we were back rolling again. We drove about 500 feet before the van came to another stop. This time, two of the teachers disembarked & motioned for me to come with them. I followed. We walked down a long paved street lined with tall walls, made a sharp left & within minutes we were somehow, suddenly, in what seemed to be the heart of a slum.

The teachers, elegant in their saris & humble in their spirits, walked comfortably through swarms of flies & combed every corner of every block of every street looking for children to teach. I stuck close to Litika, the one who had spoken the most English to me, & followed her to the end of the street, only to find that that particular area of the slum bore striking resemblance to Sierra Leone’s Kroo Bay in the way the kids & pigs played to together in mass graves of trash.

As I looked to my left, Litika said, “Many of the children are busy working so they can not come learn from us today.” She gestured lightly to the left side of the road, & there I saw another miscellany of random trash in which sari-ed, bindi-ed women & small barefoot (often pantless) children were working, assembling the plastics, cardboard, food, & other waste into their respective piles. Just beyond that a small volcanic eruption of a thick, white liquid was transpiring.

“It’s oxide. For white washing,” Litika said over my shoulder. I watched her walk away & approach a small boy who was frowning in his seat.

“Kya wa?” she asked with energy & concern. “What happened?”

The boy, with his face sunken into the palm of his hand, rotated his head in his hand to reveal one eye. His lips pursed & released some reply which I could not understand.

“He is sick,” she told me. “Most of the children are in fever now.”

With that, Litika walked off back toward the street. I hurried to follow her as she turned the corner into another part of the community. When I, too, had reached, I found her talking to a mother who was bathing her child– her small child who was getting ready to come learn with us.

The most vivid memory etched in my mind surrounding this quest for children occurred next in the sequence of events. Litika & I left the children in the van with the other teachers so that we could finish rounding up more children for our school on wheels. This time our hunting ground of choice was a mall in which the theater PVR was nestled.  It was like any mall, not that much different from Stonecrest or Stanford Shopping Center. But imagine, instead of shopping, instead of participating in consumerism as usual, we were there on a mission: to find children to teach. In our search, we climbed many stairs, circled the same fountains, & peered in the shop windows all in search of our prey. When after 20 minutes, we didn’t find any youth, we decided to head to the park to begin class. 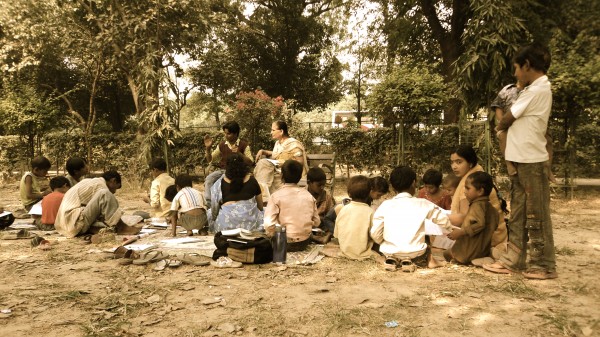 Our School on Wheels Holding its Classes in the Park


With mats strown out in the park & markers & dirt scattered across them, we were learning. We were drawing. We were growing. It was an amazing feeling of success & felt like, so early on, I’d reached a pinnacle sentiment of what this fellowship is all about: service, and service from a place of love. In the field, sleeves rolled up, one on one, no differences.
Just me & you. Two humans. Two humans helping each other. Teaching each other. It felt so wonderful & was an incredibly humbling experience.

After spending even just a few minutes with the children, it was very clear that even though they may be living in difficult circumstances (i.e. homeless, parentless, or living in the slums), they are no less bright than students who have been dealt a different hand in life. These children were bright eyed, enthusiastic about learning, & extremely intelligent. It was only poverty that was plaguing them, but beyond that, there was no difference in their capabilities & desires to learn.
We spent twenty minutes there before Pradeep came. He is a living miracle &, beyond a shadow of a doubt, has felt the touch of God. I know it. Let me tell you why. 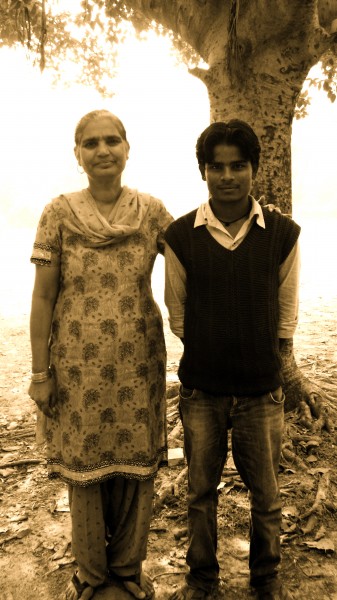 
Pradeep used to be a major drug addict. He’d do drugs, like it was breathing. It was a normal, integrated part of his life. He told me that drugs were his escape. They freed him from his reality as a kid living the ultimate hard knox in Delhi slums & streets. When one of the teachers & main Tamasha Roadshow coordinator, Jagdish, first found him back in 2006, he was passed out in the outdoor mall between Axis Bank & the United Colors of Benetton. He was lying in a corner, flies & foam spilling out of his mouth. The drugs had caused some physical disability in his body– he could barely move. That day Jagdish literally picked him up from where he lay, counseled him, & showed him love & kindness. It took a while to get through to him. Pradeep was deeply rooted in his addiction. He was simply uninterested in listening what Jagdish had to say.

That was in 2006, the same year he started coming to Katha’s School on Wheels.

-is literate in Hindi & speaks some English.

If that is not a miracle- the greatest miracle- I don’t know what is.
Pradeep wrote me a letter that day, telling me his story & asking me to share it with all of you. If you can read  Hindi, please check it out: 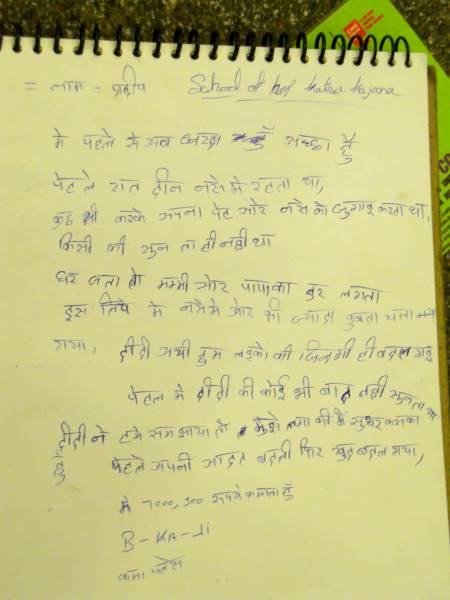 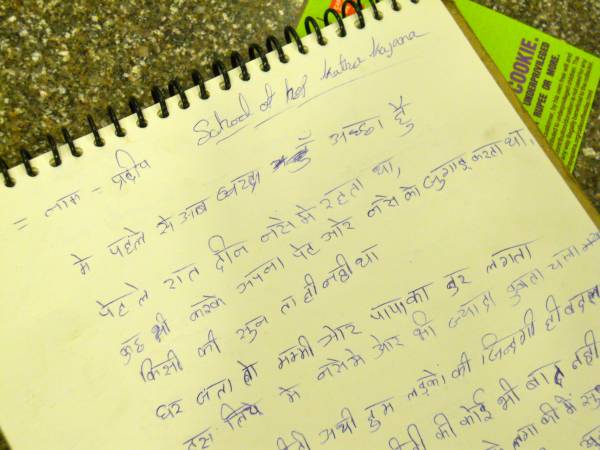 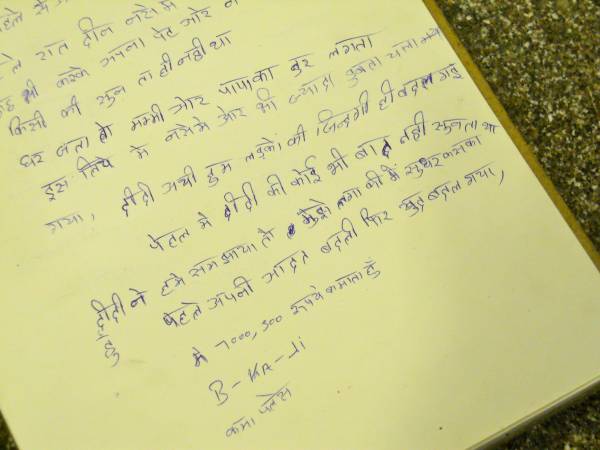 Foiling Pradeep & sitting next to him most of the time, was Karan. 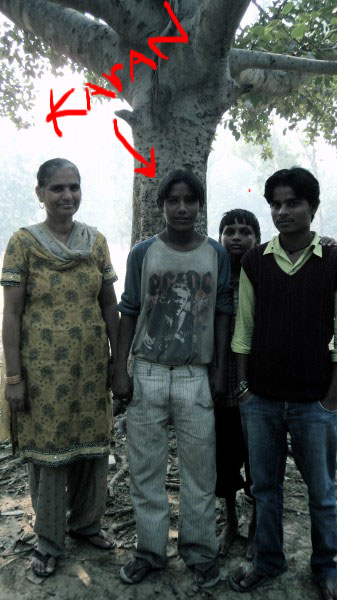 At first glance, I could tell there was a lot to his story. I looked at the bags under his red, watery eyes, the swollenness & discoloration in his lips, the blankness of his gaze, & I immediately had the gut feeling that he was struggling with drugs & battling an addiction. After speaking with his teachers, I learned this gut instinct was right.
Karan was where Pradeep was four years ago. Knee deep in crack, weed, & whatever else.
Struggling for air. Wanting to breathe, but needing the support. Support that he was only receiving from the teachers of Katha’s Tamasha Roadshow.
Karan’s story wasn’t too different from Pradeep’s. Drugs were his escape. His parents fight all the time, & so he takes drugs to numb himself from this harsh reality. Interestingly, the teachers have been really invested in Karan’s situation. When they learned of the difficulties in his home life, the teachers made a visit to his house, sat his parents down, talked to them, & since, the bickering has quieted to a noticeable degree. Karan, too, has noticed this improvement & since has begun associating education, learning & the Tamasha Roadshow teachers with a greater quality of life.
Slowly, the effect of the teachers seems to be chipping away at the tall fortress Karan has built up inside. Litika confided in me that now, instead of coming, sitting, & doing nothing, Karan has grown more engaged with school & with the material. He actually enjoys learning now!

& so, to me, Pradeep & Karan (Karan, despite his current battle with drugs– he is struggling beautifully & is going to make it! I know it.) are the greatest miracles & undoubtedly the greatest inspirations I have witnessed in my work so far. It was a privilege to meet both of them. I feel so honored to have met them, that they shared their stories with me, & that they have asked me to share them with you.

When you invest in children, you endeavor to make them agents of change. Folks, this is what it’s all about. Investing in one another. Reaching out. Lending a hand. Demanding for change. & then rejoicing in it when it comes. How will you help? How will you inspire? 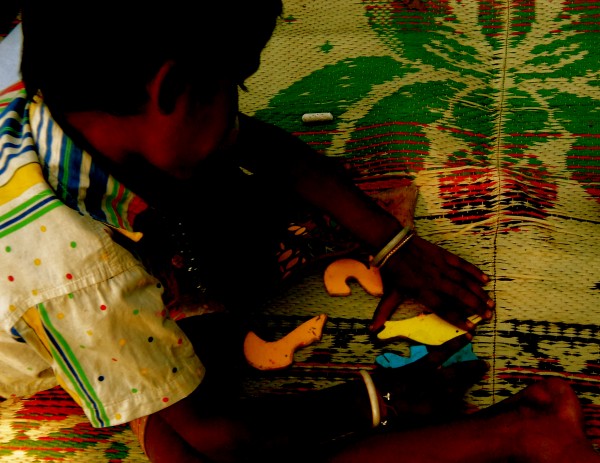