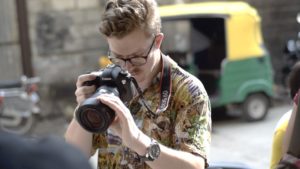 My Fellowship was a journey through stories. As a visitor to India, I engaged with stories of immense beauty and diversity, stories that seamlessly merged with my own, as I of theirs. I helped tell the stories of the young people and facilitators that comprise the backbone of my host organization Dream a Dream, based in Bangalore.

Fortuitously, during my Fellowship, as my central project and in my capacity as a filmmaker, I was invited to explore the stories of the Happiness Curriculum, the Government of Delhi’s education reform initiative that introduces and integrates life skills and emotional learning into government school system classrooms in Delhi, an initiative for which Dream a Dream acts as an anchor.

Directing this series of documentaries – entitled The Happiness Diaries – was an incredible opportunity and an immense challenge. First, the Happiness sessions are conducted in Hindi; because of this language barrier, I could not rely on spoken word to inform my actions as a cinematographer, and therefore had to rely on the emotions and dynamics of the room and the participants to guide my lens. This, however, was liberating, and I was able to capture powerful moments of intimate emotion as a result, unrestrained by the influence of speech. Second, with education at the core, the films had to capture the essence of the sessions and lessons. As the primary cinematographer, I also participated in the class, often finding myself and the camera at the eye-level of the students. The films portray the experience of being in a Happiness Class, and of engaging with the activities and stories from the viewpoint of the students, the most important stakeholders in education reform. Third, it was extremely important to me that the dignity of the participants not only be preserved through their portrayals in the films, but be augmented, especially in moments of vulnerability.

As per the World Happiness Report 2017, India ranked 122 out of 155 countries evaluated. Against this backdrop, probably one of the most positive developments was the Happiness Curriculum launched in Delhi government schools in July 2018. A year since then, the city has seen positive transformation in schools and homes.

The Curriculum consists of four distinct components that work in harmony to instill within young people, their parents and families, and their teachers a set of life skills that can help them overcome adversity and thrive in this fast-changing world – in other words, a sense of sustained happiness. These components are mindfulness, activities, stories, and opportunities for self-expression. 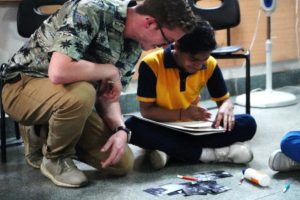 The film follows the construction of the Curriculum, and each chapter tells the story of one young person and their community undergoing positive change as a result of whichever part of the Curriculum encouraged that change. The films were produced for the one-year anniversary celebration of the launch of the Curriculum, which took place in New Delhi in July 2019. Due to their ethnographic research value and compelling human-centric narrative approach, in moving forward the films will be used as part of a toolkit to forge new partnerships with governments and organizations; the films are catalysts capable of spurring the support needed to expand the scope of life skills-based education reform initiatives around India and the world.

The language of film is highly influential on an audience’s perceptions; something as simple as the angle of a shot, looking up at the subject (and therefore giving them power and respect) or down (pity and inferiority), can radically change how an audience thinks and feels. What resulted were glimpses into the lives of young people and their communities vulnerable and open in the emotional value of their transformation, but imbued with dignity and ownership of their own stories. I hope you will enjoy watching some of the films, which are available at The Happiness Diaries.

Christopher graduated magna cum laude from the University of Southern California (USC), where he earned degrees in Film & Television Production and Cognitive Science, and a Minor in Advertising. Throughout his career, he has sought and created partnerships between film technologies and social advocacy to enact positive change. He co-wrote and co-directed “Destination: SLC,” a documentary exploring the experiences of a Kenyan refugee living in Salt Lake City, Utah, which entered the film festival circuit and won regional awards. While at USC, Chris served as the Director of Marketing and Videographer for Program Board, a collective of advocacy groups representing the diverse student populations of USC. Chris conducted research in Beijing, Kaifeng, and Shanghai, China, analyzing the role and influence of globalism in consumer culture. He also served as Team Leader and Student Coordinator for the USC Volunteer Center’s Alternative Winter Break trip to Thailand, utilizing media campaigns to secure funding and supplies for the trip. Chris was elected to Phi Beta Kappa and Mortar Board, and was a member of the Sigma Alpha Mu Fraternity. Upon graduation, he lived and worked in Tokyo, Japan, for Ashinaga, an NGO focused on the education and social rehabilitation of orphaned students, developing and producing media campaigns. Most recently, Chris completed a graduate-level filmmaking certificate course at the Film and TV School of the Academy of Performing Arts in Prague, Czech Republic.

How Ultimate Frisbee Can Change the World

JOHAR to all of you!

Adjusting to Life as an AIF Fellow

2 thoughts on “THE HAPPINESS CURRICULUM”