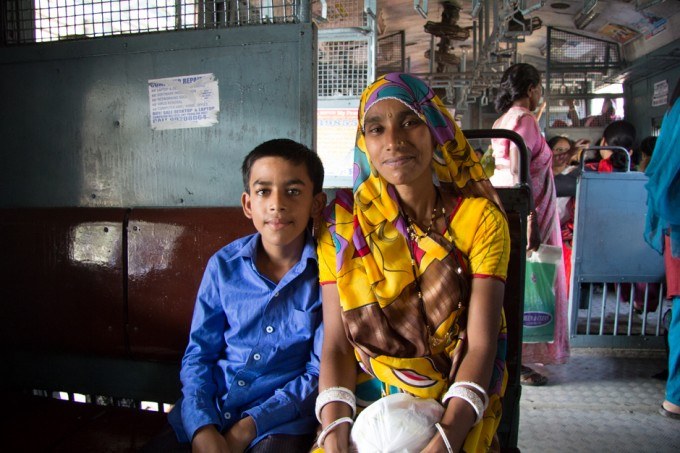 Since landing in this most maximum of cities two months ago what has most amazed me is not Mumbai’s famed, extravagant contrasts but rather the spaces in between them: the grey areas, the blurred lines. To my eye, these blurred lines are in fact those of the trains speeding unimpeded through the clogged metropolis, carrying passengers in the liminal space between where they’re going and where they’ve come from, what the city was and what it’s becoming.

“In train compartments would emerge an easy ecstasy as people from different castes and communities were forced to share benches, and in current times, are wedged together in positions of daring intimacy. This is only to be expected when 5,000 commuters are stuffed into trains built to carry 1,800—a density that the authorities describe as the ‘super-dense-crushload’. The commonplace negotiations of the commute—such as the convention of allowing a fourth traveller to sit on a bench built for three, but only on one buttock—force an acknowledgment of other people’s needs.” 1

It is precisely the consistent, easy intimacy of this space that I’ve come to rely on as I wrestle with Mumbai’s contrasts each day. Shifting between home and work means traveling across the entire breadth of the city, passing through millions of gradations as I move from the extremes of West to East.

I work in a place called Shivaji Nagar, a section of Govandi in Mumbai’s M-Ward East. M-Ward is notorious in many ways—it is home to the Deonar dumping ground, Mumbai’s oldest and largest dumping ground, and it has the lowest HDI (Human Development Index) out of the 24 municipal wards that comprise the city. Apnalaya, the incredible organization I work with, believes in using a rights-based approach to address the needs of the families working on and living around the dump.

Complex and defying the confines of a label such as “slum,” Shivaji Nagar is both blindingly vibrant and dulled by thick layers of dust and sewage; both joyous in its close-knit neighborhoods and terrifying in its uncertain legal, political, and structural standing; both an integral part of the formal city and an invisible appendage holding the body upright. Around 70% of Mumbai’s waste lands in Deonar every day, spirited away from those who can afford the luxury of hygienic homes and adequate waste management systems. Like many structures in Mumbai, this false construct of absence may not have solid foundations but it does have enough people living in it to lend it the air of security.

As for where I live, I’ve somehow found myself in Bandra West, currently one of Mumbai’s most coveted areas of residence. Nestled against the luxurious expanse of the sea, Bandra’s palm trees and dark green foliage shade the mostly quiet streets, and both families and groups of single men and women casually stroll along Carter Road’s seaside promenade late into the evening. The area is well policed and majestic old villas intermingle with signifiers of modern, urban, Indian culture: a gleaming Starbucks, a smattering of Café Coffee Days, even a Pinkberry.

Of course, neither Bandra nor Govandi is strictly of one world or the other—they are both Bombay in a most essential way. Situated just a few feet from Bandra’s Pinkberry is a fruit vendor selling his goods on the street, and small pockets of informal settlements grow between and around the foundations of luxury buildings. Govandi boasts satellite dishes on many roofs, a majority of residents have cell phones, and all of the boys are closely attune to the latest trends in Bollywood fashion and hairstyle.

At times struggling with the cognitive dissonance produced by my new situation, I began to covet my two, daily one-hour train rides and started documenting my time in the Ladies’ Car: photographing small moments, taking note of its numerous social conventions, spending entire rides chatting with other women. It is a space that sparked and fanned a fierce curiosity, especially when it took no more than a glance to understand just how separate men and women are on both the trains and on the platforms.

Mumbai’s gender-segregated railway system has received a lot of attention in the last few years, an interest generated in part due the Indian public’s increasing awareness of issues of gender, violence, and public spaces. Multiple cases of sexual assault in the country’s largest cities have been extensively covered by the mainstream press (although many more have not), raising important questions about how social and public infrastructure delimit safe spaces and areas of risk.

Addressing these issues in their fascinating book Why Loiter? Women & Risk on Mumbai Streets, Shilpa Phadke, Sameera Khan, and Shilpa Ranade assert that “[w]omen in Mumbai have, at best, conditional access to public space.” This is evident in even the simple fact that only around 15­–20% of the city’s railway cars are designated Ladies’ Cars. Further on the subject of Mumbai’s local rail, Phadke, Khan, and Ranade believe that while “the segregation of spaces based on gender in public transport does underline and reproduce gender differences,” without the Ladies’ Cars many female commuters would stop using public transportation entirely, likely due to the social taboo of so closely, physically associating with male strangers.1

I’ve sought out thinkers like these who have helped me gain a better, more nuanced understanding of the social significance of the Ladies’ Cars. However, it wasn’t until this week that I realized exactly why this space has become so deeply, personally important to me: in this tangle of change and constancy, the Ladies’ Car has become my decompression chamber. Shifting between both geographical and emotional extremes I am never sure exactly which way is up. In what instance am I surfacing for air? Which is a deeper dive into confusion, curiosity, comfort? What is safer, and in which case am I taking great risks? What do I consider a risk?

It is a heavy bag of thoughts to carry but the Ladies’ Car is a space in which I know I can safely, slowly sift through them. Like the women who closely consider the dangling packets of bangles, bindis, kitchen sponges, and fried snacks, I can choose which ideas to approach and which to leave for another day.  Then, they too can be carefully unpacked and examined as we all sway together through the heart of the city. 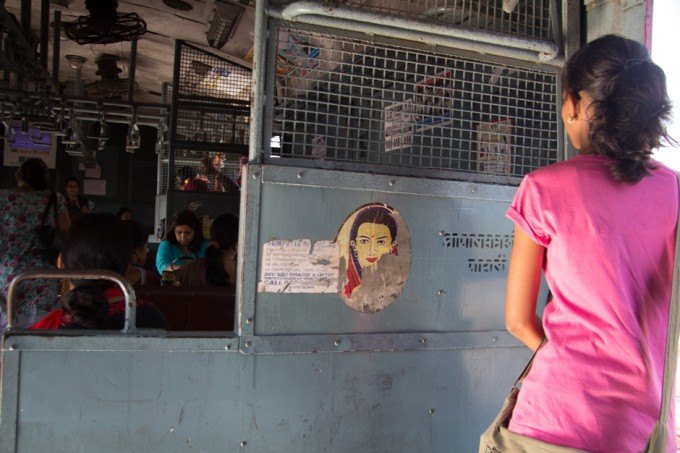 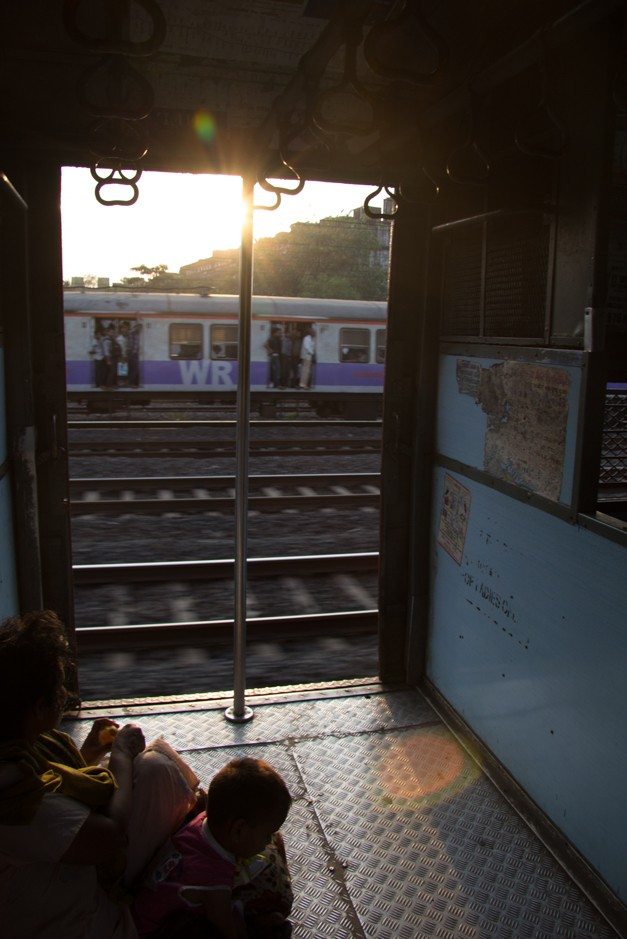 2 Shilpa Phadke, Sameera Khan, Shilpa Ranade. Why Loiter? Women & Risk on Mumbai Streets. New Delhi: Penguin Books, 2009. viii–ix; 68-69. Phadeke, Khan, and Ranade’s discussion of Mumbai’s public transportation system goes far deeper than I was able to summarize here. More nuanced issues of discrimination within the Ladies’ Car itself, and a broader look at the entire structural decision to implement gender segregation, are among the many subjects the three co-authors deftly address.

Ilana is a second-year Fellow with a passion for multimedia storytelling, a love of Indian literature, a longstanding interest in public health awareness, and a dedication to promoting the rights of women and girls. As an undergraduate, Ilana produced UPenn's 2010 production of The Vagina Monologues and co-founded The Penn Monologues, an annual show written and performed by students, staff, and faculty. Ilana's interest in public health is informed by her experience as a UPenn-Botswana Partnership Early Education Intern in Gaborone, Botswana, where she worked with children affected by HIV/AIDS. Additionally, her passion for education is rooted in her work as a 2010-2011 Fellow with The Modern Story in Hyderabad India, where she taught digital storytelling to 8th and 9th grade students in government schools. Prior to joining AIF, Ilana worked in Switzerland as a writer and editor for Urban-Think Tank and the Chair of Architecture and Urban Design at ETH ZÌ_rich.

5 thoughts on “The Ladies’ Car”