My phone vibrates with an incoming message. It’s just past 7:30 one early December morning, and I’m stepping off my overnight bus to Pondicherry. Bleary-eyed, I peer at the screen. “Urgent,” it reads; what’s urgent? It’s not the first time a stranger has reached out to me over Facebook, their messages, almost always spam or advertisements, daring me to reply. Something is different about this one, though; something feels earnest and honest, perhaps even truly urgent. I can always discontinue the correspondence, I figure; or, worst comes to worst, block the sender. I have nothing to lose.

I settle down at the nearby chai stall and plug my phone into a power bank.

“Ek chai,” I say, and soon my fingers wrap around a warm metallic cup filled with steaming liquid. The chai eases me into the morning, a splash of spice to the gut and brain. I consider my response to the message carefully, and with all the cunning the morning could offer, I send him my reply.

Our conversation activates. It’s his move. I’m curious to see where it goes. A driver in the street-side rickshaw pool perks up at my presence.

“Where are you headed?” he asks, motioning for me to slide into his backseat.

“French Colony. Have you heard of it?” I ask jokingly.

“400,” he replies without losing a moment. There’s no levity in business, so we power forward. A deal is cemented, and I climb inside. With a quick U-turn that flattens all onboard parties against the wall, we speed off into the misty morning.

The air is crisp, the architecture French. We arrive to the hostel in a cloud of dust. I slink inside the white building; it’s too early to check in, so I cozy into a sofa for a few moments of rest. I feel my eyelids grow heavy and my chin drift low. The humidity is tiring; it’s a far cry from the mild weather of my host city Bangalore. I fold my glasses over the neck of my shirt and sink into the cushions for a short nap. Then I feel it, another vibration in my pocket – he’s responded, and what he says, quite frankly, shocks me.

Rewind the clock about a month. It’s the end of October, Halloween weekend, and I’ve made arrangements to travel to Mumbai. I’m stepping out of an auto-rickshaw one sunny morning when I feel a quick flash of unease. I instinctively check for my belongings, and I realize, to my horror, that my wallet is gone. My driver’s license, debit and credit cards, insurance card, university ID, and a not-insignificant amount of cash have all somehow vacated my pocket. I leap into the back of the rickshaw to scour every nook and cranny. I scramble back down the road a hundred yards, much to the confusion of the driver, in an attempt to retrace our path. Defeated, I return; I’m seemingly stranded, penniless, far from my hostel, and facing the reality of somehow delivering the fee for the ride I had just taken. My phone is quickly dying. Mumbai’s Uber drivers are on strike and refusing to work. The United States is a half day behind in time. My mind reeling, I turn to the driver and cut a second deal: take me to the nearest Western Union, and you can leave the meter running.

I stare at my screen. I lift myself out of the crevice of cushions and perch on the edge of the couch. I’m hesitant – by all accounts, that wallet should be gone. I’d submitted for a new driver’s license, canceled every card under my name, and set up a fraud monitor with my bank just in case. The statistical probability of any contact with these things again was so dishearteningly low that I had immediately resigned myself to starting anew – and that even meant parting with sentimental items. Yet, here they are. I’m cautious in my acknowledgement.

The employee at the Western Union in Mumbai taps methodically into his computer, assessing the likelihood I can receive a wire transfer from my father – enough to absolve myself of my debt to the driver and ensure I’m not marooned in Maharashtra. Progress comes slowly; it’s a series of inputs and clearances, passwords from one end of the transaction to the other. I can sense the driver growing tense. After all, none of this is his fault. I’m draining time out of his day that could be spent shuttling other passengers. I’m at a loss, though – all I can do is assure him that the money will come soon.

“When I was in Chicago my wallet was taken at a metro station. Someone then had helped me.”

He unfolds a few rupee notes and hands them to the driver, enough to cover my accrued costs. I thank him profusely, but he tells me not to think twice about it. “You are our guest here,” he says.

“Lesson learned, though,” he adds. “You shouldn’t carry everything in one pocket.”

The hostel clerk arrives and flips open the logbook. Other guests file through the door, excited and sociable. Not me; whoever this person is, his path has crossed with mine and I’m invested in what he has to say. The text blip of a message in-progress hovers on the screen before me. I don’t hear the clerk call my name. I wait for the next reply.

I’m floored by this message. Beyond the fact these cards are still intact, let alone still together, after having traveled somehow through the streets of Mumbai, it’s the realization that this person, a self-described “scavenger worker,” had done any of this at all.

It gave me pause. Every once in a while, I feel, a moment will come along that reminds you of what it means to be a member of this human race; or, at least, what it could mean. It’s a reminder to take the opportunities to be good when they are presented to you. It’s a reminder that there are people who have less, but who give more.

At its core, it’s a simple act of giving that radiates like a lantern from within a stormy world. 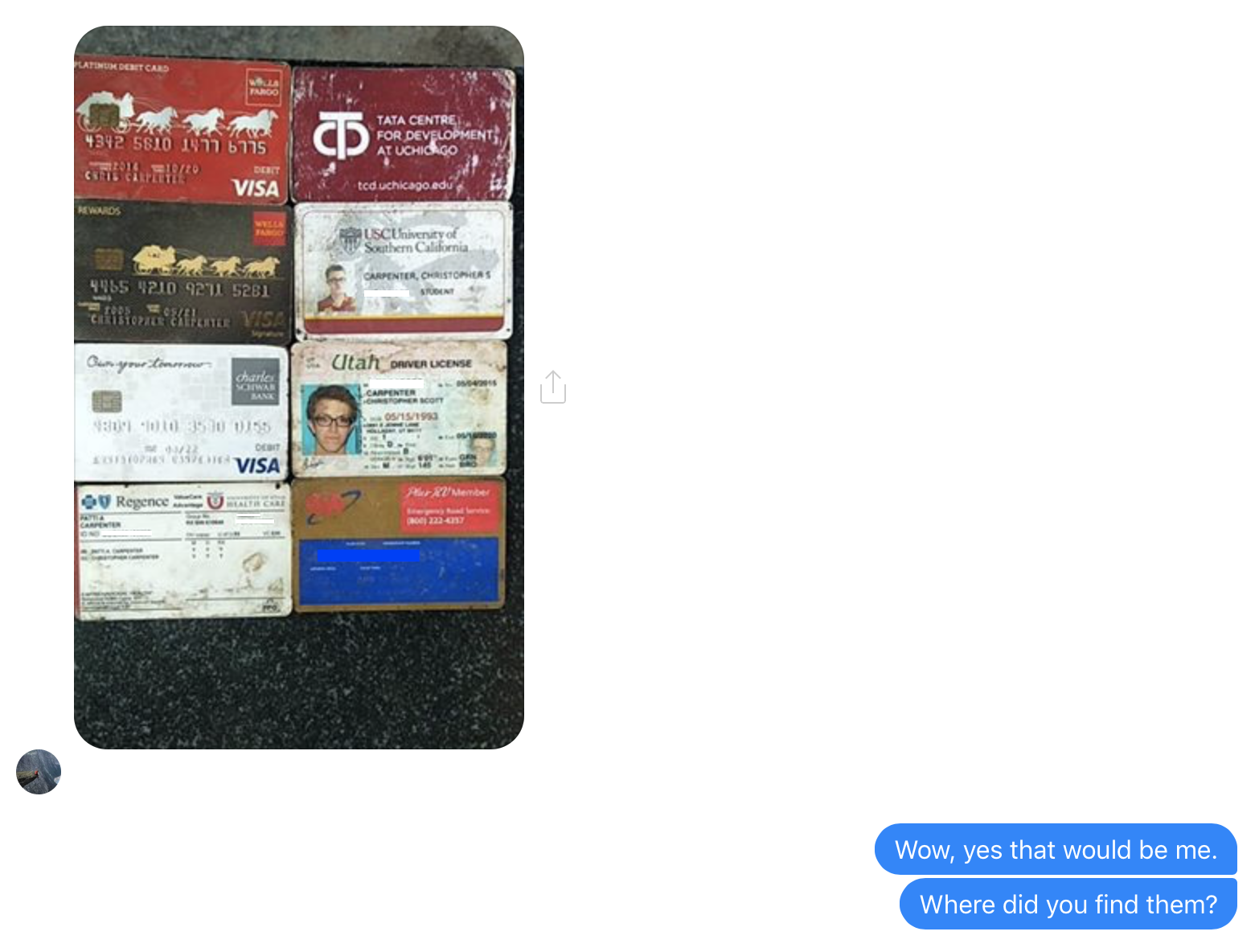 It’s also an instance of one question being answered and three more sprouting up.

The term he used to describe himself – “scavenger worker” – seemed to burn a hole into my screen. The implications of these words are immense – it was my first overt encounter with the caste system of India, the oldest and most pervasive system of social stratification in the history of the world. Scavengers, or “manual scavengers” more formally, are workers who remove and deposit, almost always without protective equipment,  human waste and garbage. The job is traditionally reserved for the Dalits, the “Untouchables,” the lowest classification in the system (Goswami). Despite legislation enacted in 1993 to prohibit the employment of manual scavengers (Parliament of India, The Employment of Manual Scavengers and Construction of Dry Latrines (Prohibition) Act, 1993), the practice continues, nigh unregulated (Bajpai). There are estimated to be almost three-quarters of a million manual scavengers in India (Bose); at least 63,713 in the state of Maharashtra (Ingole); and one, in the city of Mumbai, whose story, through the discovery of a stack of credit cards, has intertwined with my own.

At its simplest, the Indian caste system separates society into distinct strata based solely on birth, from the class of priests and scholars known as Brahmin down to the sweepers and cleaners called Dalits (BBC News Asia, “What is India’s Caste System?”). The roots of this system are debated, but it found new purchase during the rise of the British Raj when it was codified, with higher castes given employment and preferential treatment and lower castes discriminated against and criminalized (Bayly 25-27, 392). Many scholars argue this was the period of crystallization that made the system today so hard to break (Dirks 198-225). Modern Indian society is, however, drifting slowly towards the eradication of caste, but old habits die hard; one must look no further than the frequent outbursts of violence toward Dalits that occur in every corner of the subcontinent (Human Rights Watch, Hidden Apartheid: Caste Discrimination Against India’s “Untouchables”), or to the content of these Facebook messages on my computer.

I find that one of the many benefits of prolonged engagement with cultures different from my own is the realization that the social structures that have guided my life and informed my identity are in no way absolute or universal to the human experience; in fact, not only are they not universal, they are basically exclusive to me, a single person in a hugely, beautifully diverse world. This acquisition of new perspectives – the “perspective” people often claim to acquire when traveling, a truism I indeed find true – is as secretly potent as it is blatantly simple because it, I think, liberates one’s thoughts of judgments when attempting to understand the behavior or life experiences of someone else. I was surprised by the candor with which he relayed, in my eyes, an association with a term rife with connotations still lingering in the afterglow of colonialism. But surprise doesn’t necessitate pity, and a key distinction emerges: do I consider his story wholly separate from mine, or do I acknowledge that my placement on this mortal coil was arbitrary, as arbitrary as any other, and that we just as easily could have been walking in each other’s shoes? At its core, it’s the difference between sympathy and empathy. One highlights distance; the other exhibits understanding.

After all, my own last name – Carpenter – finds its origins in the work my ancestors did; the work of craftspeople. Many English names do. It’s staggering to think just how different a life story can be when modifying something as simple as birthplace.

Christopher graduated magna cum laude from the University of Southern California (USC), where he earned degrees in Film & Television Production and Cognitive Science, and a Minor in Advertising. Throughout his career, he has sought and created partnerships between film technologies and social advocacy to enact positive change. He co-wrote and co-directed “Destination: SLC,” a documentary exploring the experiences of a Kenyan refugee living in Salt Lake City, Utah, which entered the film festival circuit and won regional awards. While at USC, Chris served as the Director of Marketing and Videographer for Program Board, a collective of advocacy groups representing the diverse student populations of USC. Chris conducted research in Beijing, Kaifeng, and Shanghai, China, analyzing the role and influence of globalism in consumer culture. He also served as Team Leader and Student Coordinator for the USC Volunteer Center’s Alternative Winter Break trip to Thailand, utilizing media campaigns to secure funding and supplies for the trip. Chris was elected to Phi Beta Kappa and Mortar Board, and was a member of the Sigma Alpha Mu Fraternity. Upon graduation, he lived and worked in Tokyo, Japan, for Ashinaga, an NGO focused on the education and social rehabilitation of orphaned students, developing and producing media campaigns. Most recently, Chris completed a graduate-level filmmaking certificate course at the Film and TV School of the Academy of Performing Arts in Prague, Czech Republic.