Serving in South India, I was warned constantly about the relentless summer heat. Because my Fellowship service site was at a residential school, students were sent home during the hottest part of the year (late April through early June), so I had nothing with which to distract myself during the heatwave. I could have chosen to work remotely while the students were gone, opting to stay somewhere with air conditioning or a steady breeze, but I ended up staying on site for much of the month. And that gave me opportunities I would have otherwise missed out on.

One such opportunity was the offer to visit a coworker’s family in the southwestern part of Tamil Nadu, Tenkasi. After a 12-hour train ride, we took a bus ride to another bus, arriving at her family’s home almost 16 hours after we originally left the school. Tenkasi is near the border between Tamil Nadu and Kerala, and so is a bit cooler than where I was serving near Kanchipuram. What I had not known until I visited was that my coworker’s entire extended family and many of the neighbors she grew up around, were all involved in organic agriculture in some way. Because my Fellowship project was focused on sustainable and organic growing practices, during our visit my coworker took me around to a variety of different growing operations – the most exciting, for me, being the sugarcane farm where they make jaggery. 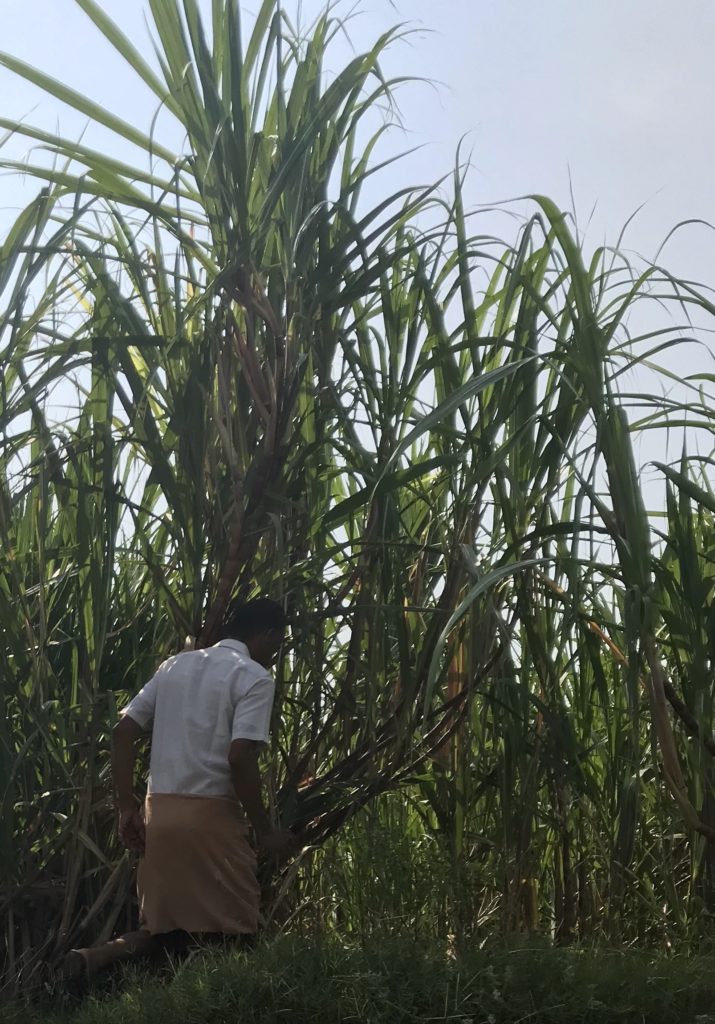 Jaggery, or vellam in Tamil, was a new food for me when I first came to India. For those who haven’t had the pleasure of eating it, jaggery is an unrefined sugar made from boiling raw sugarcane juice until it solidifies. To me, it tastes like a mix between brown sugar and molasses. In my experience, it was used commonly in many South Indian kitchens and dishes. There are many people who swear by its health benefits, especially when compared to white refined sugar. 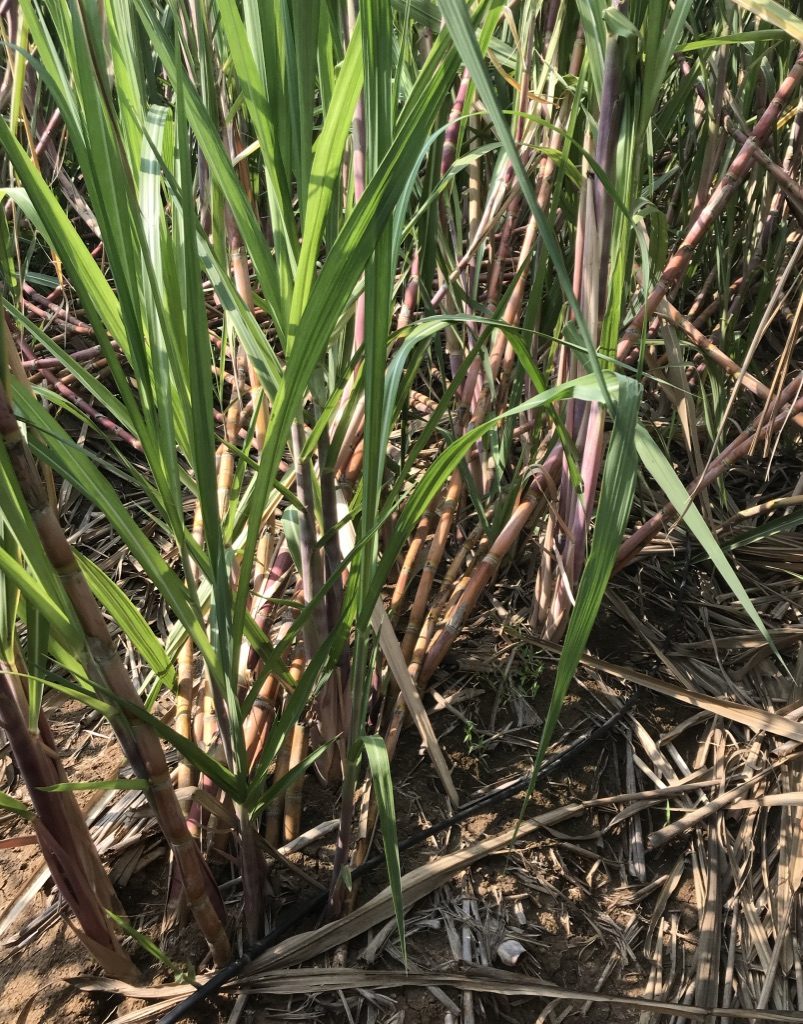 But an issue that I heard come up a lot anecdotally was that most jaggery available for purchase in grocery stores and markets had additional additives and preservatives that people did not always feel comfortable ingesting. A study on jaggery in 2006 found that “chemical clarificants… [such as] hydro, super-phosphate, phospohoric acid, chimiflocks and alum [have been reported].” What was unique about the sugarcane farm that we visited was that the jaggery was made on-site with no additional preservatives, additives, or chemicals. This not only ensured that people felt they were getting a healthier, more wholesome product, but also allowed the farmer to get a higher market price.

Because everything was produced on-site, we were able to see the whole process of making jaggery. We started in the sugarcane fields. Contrary to more conventional farming methods, where after a sugarcane harvest the stalks are burned and the field is left empty, the farm we were visiting left the stalks in the field for groundcover. All remaining plant material was left as mulch, and in between the stalks was planted cover crop until the stalks regenerated the sugarcane. The crop that we saw had been growing for over 25 years!

After harvesting, the sugarcane is pressed into raw, unprocessed sugarcane juice. These juice presses are also a common sight on the side of roads in the hot summer months – sugarcane juice on its own is a deliciously cooling beverage. 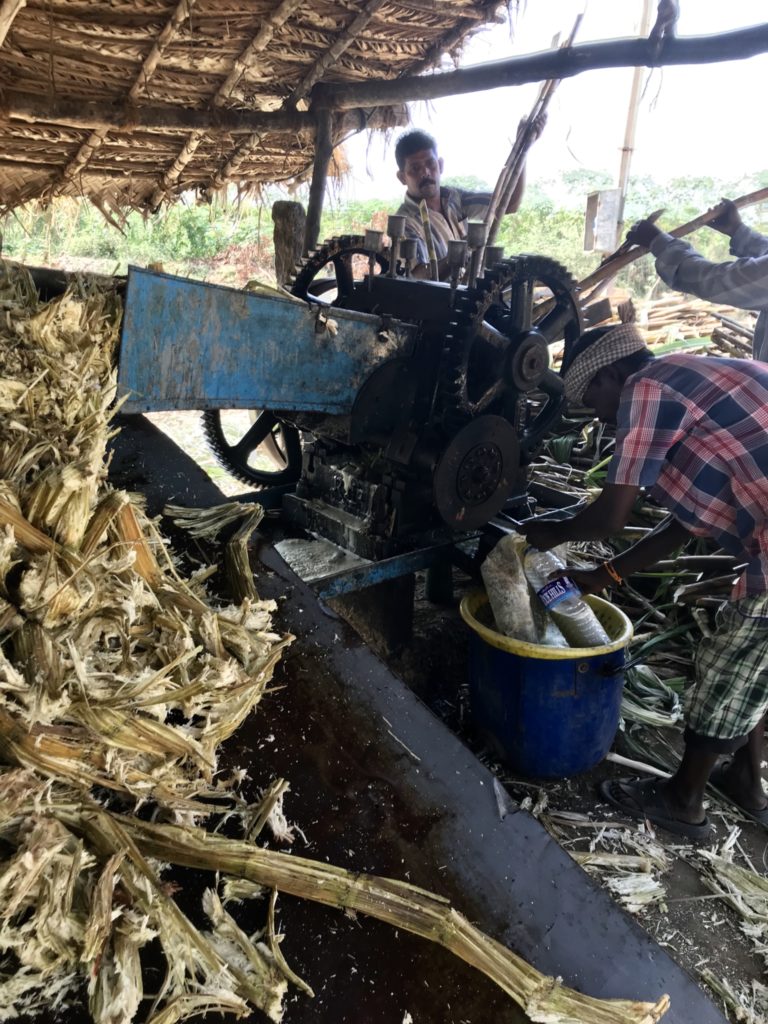 But to make jaggery, the juice is then poured into a large vat and boiled, sometimes for hours. The liquid needs to be stirred constantly, and any impurities or froth that comes to the top needs to be skimmed off. In 110 degree Fahrenheit heat (43 degrees Celcius), this is probably the most challenging job. After boiling, the sugarcane juice has become more solid and paste-like, and the vat is tipped into a wooden mold. After cooling and drying, the paste is shaped into balls, and the jaggery is ready! 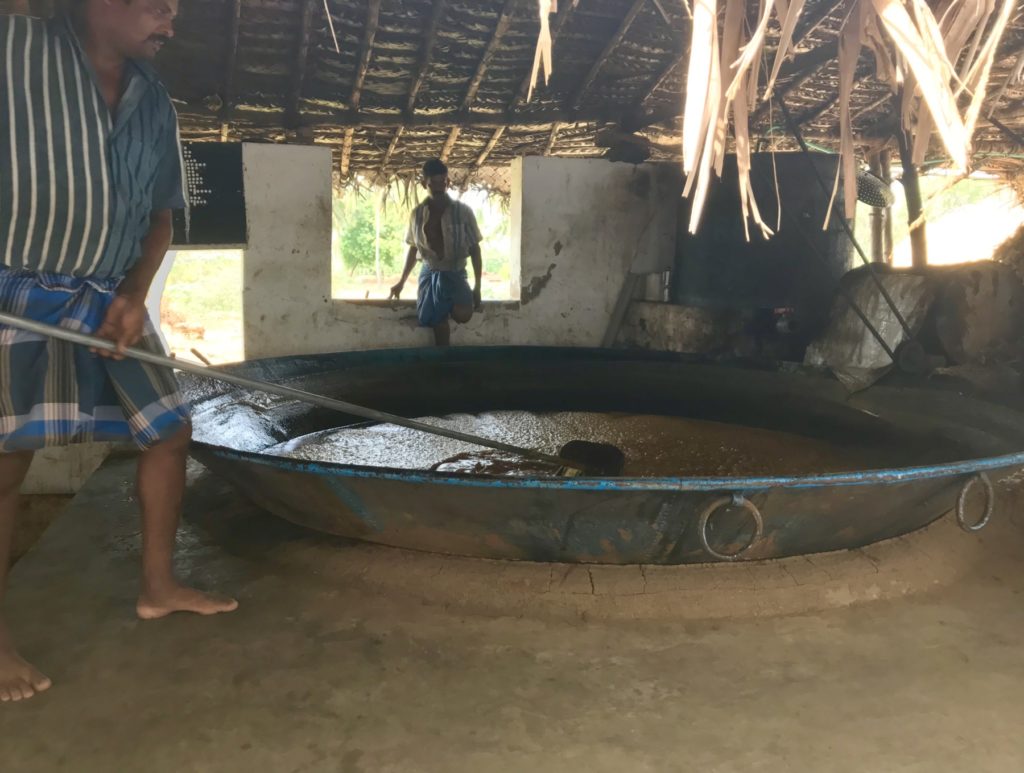 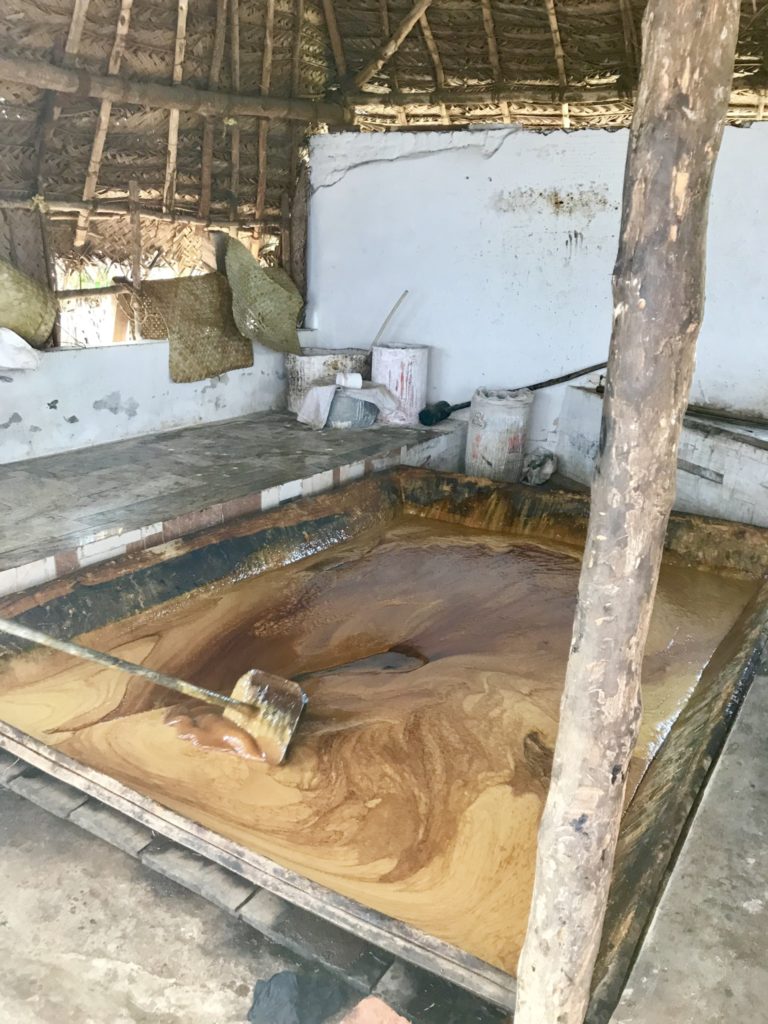 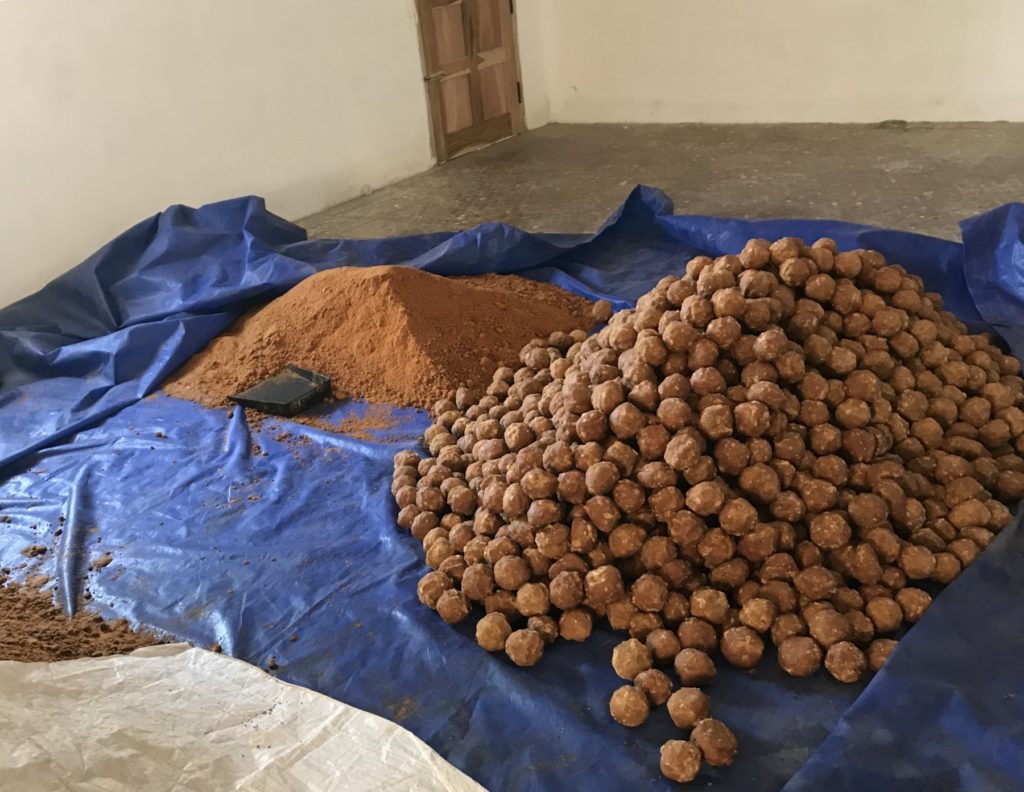 Perhaps the most impressive part of this operation (other than the fact that everyone was working in 110 degree heat near an open fire) was that there was obvious order to it. Rather than harvesting all the sugarcane at once, the fields are harvested in segments. Sugarcane is brought fresh to the press, which is then turned into juice and boiled. The dried stalks once the juice was pressed was used to light the fire to boil the juice. Each field, juice, and boiling process was meticulously planned so that nothing would go to waste.

Well, I take that back. The actual most impressive part of the operation was the finished product. I’m not one to eat sugar plain, but having just seen the whole process, I had to give it a taste. And compared to some of the jaggery I had at the market, this was a night and day difference. It was definitely worth the long journey.

Tessa grew up in Wisconsin and graduated with a degree in Political Science and minors in Environmental Studies and Economics from Luther College in Iowa. After studying sustainable international development at the University of Oslo International Summer School, she returned to Iowa to give back to her community by serving as a FoodCorps member and then as Youth Education Coordinator at a local non-profit. Tessa has spent five years in the Cedar Rapids community, working with youth aged preschool through high school to create a love of growing and eating healthy food. She has also worked with teachers in the school district to implement nutrition and garden lessons into the curriculum, reaching those students who learn best through alternate, hands-on activities. In her free time, Tessa is a voracious reader and loves experimenting with new vegan cooking recipes. She is excited to take her experiences of outdoor education into a new setting in southern India.