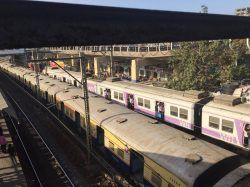 When I was younger, I suffered from fear of germs. My sister, angel that she is, took it upon herself to help “cure” me of it. One day she pulled me by my hand out into our backyard and made me squat with her in the muddy ground. “The only way you will get over this,” she said, “is to face your fear head-on. Here, eat this clump of dirt. That way you’ll never be afraid of dirty germs again.” Slightly flawed logic she had? Debatable. Her sentiment, though, of facing your fear has presented itself many times in my adult life. For example, according to my 12-year-old sister’s logic, my fear of being Mufasa-style-murdered in a trample of human beings, or being smooshed by a moving train could only logically be cured by travelling on Mumbai’s local train system.

I start my commute to work everyday by taking a shared cab to the Elphinstone Road train stop. As soon as I start to approach the mouth of the station’s entrance, I’m often challenged head-on with a swarm of people going in the opposite direction as me. Yes, these days a nice healthy adrenaline rush (and occasional heart palpitations) has fully replaced my wake-me-up caffeine kick in the morning. I carefully weave my way down the stairs, finding a small spot on the staircase to fight the masses of people working against me. I make it down and wait for the train with the rest of the crowd. A flare of anxiety rears its head as I wait for the train to come to a full stop next to the platform. People are skillfully hopping on and off while the train slows down. For those of you who don’t know, the doors on Mumbai trains are always kept open, allowing for a pleasant breeze and potential death during your ride. The crowd rushes forward, refusing to wait for those on the train to get off. A slew of profanity goes through my mind, as my teeth grind against each other in annoyance and frustration at the hands touching my body and the shoulders slamming into mine. Some are shoving my back and the rest are pulling me in a million different directions. People are yelling at everyone else to move here or there, to make more room in the compartment that is already so incredibly packed.

There is so much to appreciate, though, about the beauty of the Mumbai train experience. Yep, contrary to the slightly dramatic picture I just painted, using the train system has not only been one of the most immersive parts of living in India, but it has also become one of my absolute favorite parts.

When I do get onto the train, I take it all in. In one small compartment, you get to see a sample of every good, bad, ugly, and beautiful part that living in Mumbai has to offer. All in one sweep, I can see the colors and vibrancy of saris. I can hear the interweaving fluidity of English, Hindi, Marathi, and sometimes other languages. I can see the local merchants with their hangers overfilled with hair clips, tissues, earrings, anklets, paper, books, and so much more. I can smell the vada pav and samosas that are being loudly sold up and down the aisles. I can hear the piercing voices of the merchants marketing their products in a language that, I swear, is only understood by them. I see people wearing saris or salwaar suits, with large bindis on their heads and hair pulled back. Then I see their counterparts, women in jeans, tees, and shades. I can see women mouthing prayers to themselves, reading from religious books that are clutched in their hands. I can hear the songs of blind beggars walking through, banging sticks all the way down the aisle. I can feel the hand of a hijra blessing me as she passes through the train collecting coins. I can see small children walking up to train-goers asking for money. I can see the flinch of pain on the faces of people as they quietly tell them no.

My experiences riding the trains in Mumbai have encapsulated everything that I love, fear, and fight while living in this city. In fact, even when I have hated living in Mumbai, I still loved it. My daily rides have been a constant reminder that life is not easy. Sometimes an entire school of people force you to go left when all you want is to go right. Sometimes you see such desperation that you think there’s no way reality is this cruel. Other times you see such beautiful moments like a young mom stealing possibly the only few moments in her busy day to cuddle her little one. And you wonder how it’s possibly possible for all of this to live under one roof . And I think that’s the beauty I’ve found on the Mumbai trains. In such a vast, dynamic city with its harsh nature and its varying shades and differences, it’s the train that refuses to sugarcoat anyone’s truth or reality. And it’s the track that sews it all together to include every rider’s’ story.

Although being an Indian-American, Nisha has never been to India like her parents did and now is excited to integrate into the Indian culture and make it a strong part of her identity. She is passionate about health and education and is looking forward to working in the same field through AIF and her host organization. Through this fellowship, she wants to learn about the issues from the people who are living through them and wants to gain a deep understanding of them. Prior to AIF, she was living and working in Peru and Tanzania, an experience she things that would help her in this fellowship.

5 thoughts on “The Train That Tells”