It takes several hours. Hours to plan ahead with the right questions and to establish the right connections. Hours to drive out to the villages and hamlets hidden within the thick, protected forests. Hours to receive permissions from local police to be allowed to be in this space. Hours to listen and write, then translate and write more. Hours to finally transcribe and digest the numerous stories. Hours to tell these stories and find ways to make these stories concrete narratives in the media, portals, and public of India.

These are the stories of the Honey Hunters of the Nilgiris, the Blue Mountains, of Tamil Nadu. The honey hunters hail from the various tribal groups of the Nilgiris Biosphere Reserve and for several of the indigenous groups their histories and traditional practices have been recorded, albeit with missing information but nevertheless documented. My job for the past few months (and months to follow) has been to collect and consolidate the already existing information of these groups along with information about the honey, honeybees, and conservation efforts in this area, all to be implemented within the eventual Honey Portal website. In addition to this layout of the project, I also wanted to acquire the unique anecdotes from as many honey hunters as possible, across as many different tribal groups that I could get to. The anthropological information of a people is important and necessary, yet I also think it is crucial to know the narratives of these people: what are their stories? What does it mean to them? What are the changes they have seen? How would they describe their experiences rather than just the language of academia being the only medium of their stories?

These are the questions. It was my amateur effort to stimulate reflection in the interview. Often the questions were interpreted differently from person to person and I took whatever responses came my way:

These are some of the responses. Some of the finer details were likely lost in translation, but here at least are the rudimentary forms of their narratives that I received:

The name of his village is Geddisal and he began the practice of honey hunting at the age of 20; he is now 45. Unlike most honey hunters, he was not taught by his father yet still felt compelled to learn this practice of his people and so followed other honey hunters into the forest, watched and learned. His reason for continuing honey hunting is simply for happiness; it is a passion which also helps to sustain his family. He loves the experience of climbing up and down the tree in order to gather the honey. One of his favorite stories is even of play! After finishing a successful honey hunt with his comrades that take the remnants of honey left on their hands and rub it into each other’s hair in order to make it turn white. All for the sake of fun once the job is done! 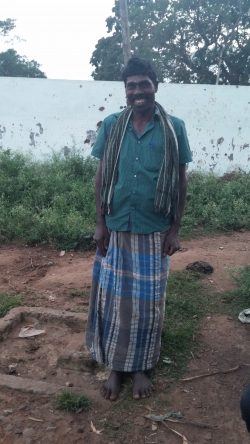 One of the oldest members of the Geddisal village. He began honey hunting at the age of 7. Most other honey hunters start this dangerous practice between the ages of 10-12 and with the more docile species of local honey bee (cerana). It isn’t until their late teens and early 20s when they feel confident and capable to take on the hives of the vicious Apis dorsata. Mathun started at the age of 7 and climbed right to the hives of the rancorous dorsata. Even more eyebrow rising is the fact he was taught by both his mother and father how to honey hunt. Hence this now male dominant tradition (at least in the Nilgiris) was once shared between the sexes. I have heard of only one legend of a female honey hunter from generations back but there has yet to be an explanation for why the practice has ceased among the women. Maybe it will never be explained. Maybe there is no explanation.

For Mathun, honey hunting is a tradition and he would continue it even if it weren’t a cash commodity. He remembers the days when collecting honey was only for food, not business. Being an elder and well-seasoned honey hunter, he has trained 200-250 in his village the art of honey hunting. He has also seen the changes involved with honey hunting – once when 60 or more combs could be found on a tree now it is more common to see merely 10-20 combs. He explains this phenomenon by saying that honeybees are separating like people; people who no longer stay in one place like a village but leave to find something more. In other words, the honey bees are absconding the nests earlier than normal. There are less resources (fewer forests, fewer flowers to pollinate) and they leave sooner for the sake of survival. The simplicity of this statement revealing a complex and tragic truth. 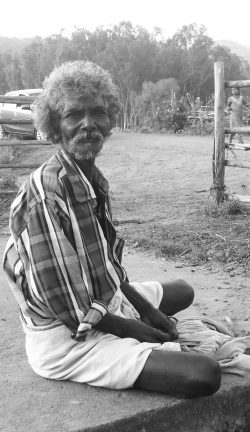 Since 2011, he has been the leader for honey hunting in his village called Vikkyapdigai and has taught more than 50 people from different villages this ancient practice. He himself was not directly taught by anyone, such as a father, and rather learned the basics on his own. He spoke strongly of honey, hunting being for the purpose of tradition, both for him and his community. Honey must be given to neighbors, a way of helping and feeding others. Nataraj also believes strongly in the connection between the honey hunter and the honeybee – if the hunter comes with a good purpose and pure heart, then the honey bee will give way and you will not be stung. Hence why he does not fear collecting honey during the day, like most honey hunters, because he has faith in the honey bees and the connection he has with them.

While some of the honey hunters had little or nothing to say of their most significant memories from these honey gathering experiences, he had more stories than time to tell. One of the largest cliffs in the area is called Padivarai that would hold as many as 150 hives in a given season. Before 1965, the honey hunters of this village would collect honey from every single one of these hives. But since that time very little collection was done on that cliff because the honey hunters had the experience to take on a mammoth of an endeavor. Then Nataraj was proud to state that this year (2016) they once again started collecting from the Padivarai cliff and collected all the hives within seven days. The first and only story I have heard, thus far, of a historical skill being revived to full capacity among the younger generation.

He also spoke of the challenges, not only physical but also mental, that one must face when going for this seasonal collection. After scaling down a 400 foot cliff and collecting honey he was ready to return but felt too tired and sore to climb up the cliff, yet the rope was too short to climb down. He had to remain dangling from the cliff until his comrades brought a longer rope to climb further down. Even then it did not fully reach and he had grab at a tree to climb down. This was the only time he had questioned his profession as a honey hunter – even if one comes out unscathed from such a challenge, they are not invincible to the mental strain induced by the moment. There were numerous other stories he was eager to tell but was bound to his day’s work and had to dash off. Some stories simply go untold. 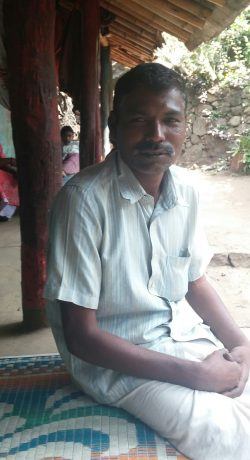 He lived at the edge of the valley and the edge of his village called Kolithurai. He was a retired honey hunter due to health restrictions, and yet with still much to say. He too spoke of the Padivarai cliff and how once during a honey hunt he found one massive comb that was so large it gave 45 kg of honey, not including what fell from the comb when it wasn’t being filled in the vessel. It took four trips of going up and down to fill and empty the basket and that one comb alone brought in 4000 rupees, an incredible price for just one hive.

And yet he does not have confidence that these seasonal collections, these opportunities, will be continued by the next generation. Honey hunting was once solely for the purpose of survival, to have food, such as going to the forest to gather potatoes. Now the government provides rice for free. It also has provided TVs, grinder, and other such devices, and supposedly as a means to gain votes. It seems there is a loss of interest an ancient tradition because there is a modern supplement to provide for immediate wants and needs. He finished the interview by singing for us a song sung to the honeybees while collecting honey as a hope to pacify them. In the song he refers to the honeybees as “Athige” – a respectful way to refer to a woman in the Kurumba language. The “Dhodda (older) Athige” is the queen bee and the “Kunna (younger) Athige” are the worker bees. 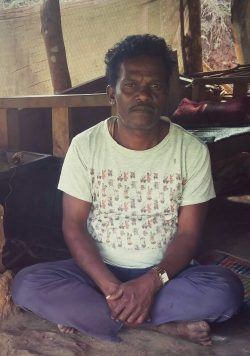 These are 4 of the 15 interviews I have gathered so far in the Nilgiris. There are many more stories to find, to listen to patiently, to be translated, to record, to take photos, to reflect upon, and hope (So Greatly Hope!) that these anecdotes will be of worth and somehow make it into the public sphere. I believe in the power of narratives. I believe that stories draw people in and give them a chance know someone else’s truth or perspective, without the need for facts and figures. I believe that stories, these stories, can cross boundaries and oceans, permeate through media and the public, and increase awareness among people. And with awareness there can be change – in progress, growth, or simply understanding. And that, I believe, is good and worthy.

Please enjoy the bee song being sung by Ramichandran!

2 thoughts on “Those Who Hunt Honey”