“I thought a lot and developed the far-away look of a dreamer, for it was always the distant heights which fascinated me and drew me to them in spirit. I was not sure what could be accomplished by means of tenacity and little else, but the target was set high and each rebuff only saw me more determined to see at least one major dream through to its fulfillment.”

The large, white moons sitting on top of the rugged cliffs of her cheekbones began to swell against the glaring, red horizon. Stories of both triumph and struggle dripped lithely from them like leaves of autumn; seasonal stories that have been told many times before. Without looking, her right hand breaks the chain of fingers of the left hand, and finds refuge on her daughter’s knee. As if passing down the tales of her painful past through solely touch, the daughter reactively lets out a few droplets before wiping them away quickly in hopes I didn’t notice.

There are things in tears.

The one way I knew I could help them would be to accept them into the project I designed with SAFA. The project would provide the daughter an opportunity for her to study in a school that could improve her education and have the opportunity as she gets older to study not only in the best schools in India, but perhaps abroad. The decision was easy. Her family demonstrated a strong commitment to her education, and she passed her exams with flying colors. Her and eight other student would be accepted for the project, just in time for the end of my Fellowship. 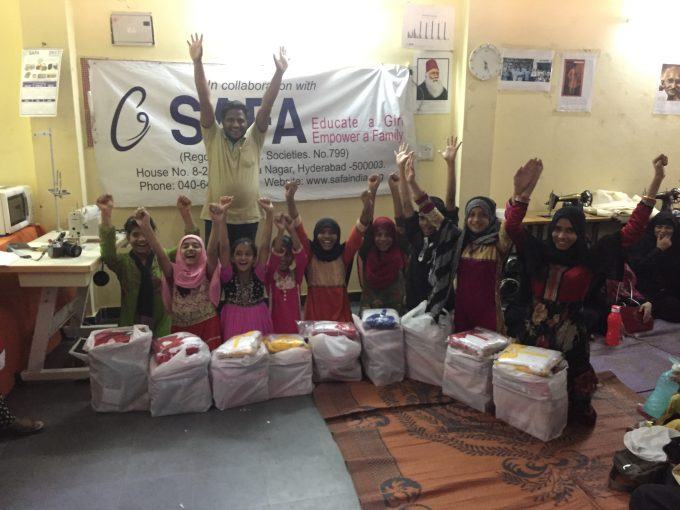 It wasn’t the easiest decision to make. After spending so much time in Hyderabad working on a project I worked hard on, only to leave it behind during the middle of the implementation phase is a frustrating, if not draining, thought to consider. However, since the first week of arriving in New Delhi I have been battling gastrointestinal issues. For as long as I can remember, there was not a day where I did not suffer from sharp pains in my stomach and abdomen or spend hours in the restroom. With my symptoms worsening, and with the only option left being an invasive procedure, I decided enough was enough.

There was no going away party but I did received a bunch of emails and messages from a supportive AIF Fellowship cohort wishing me the best of luck on getting better. The messages I received were a great representation of the people that comprised it: caring, thoughtful, comical, and positive.

I always thought my departure would be emotional. There would be tears. There would be long-goodbyes interrupted only by more tears and record-breaking hugs. However, within hours of packing my bags, I was on the highway to the airport. I listened to music. I watched the city lights soar pass me. At the airport, I bought a neck pillow. It was as monotonous and unemotional as another day at the office. The only difference was: I was leaving a country I learned to love, even though it’s bacteria didn’t love me back.

Adjusting back to life in the United States was just as monotonous, except being with family again was relieving and heartwarming. Not too much has changed, honestly. The biggest difference is perhaps being able to communicate in English effectively. The hardest part of adjustment is leaving the Fellowship and the work incomplete. Leaving behind my friends. Leaving behind Darjeeling and Kerala, two places I dreamed of visiting before ever setting foot in India. It’s not how I wanted things to end, and my gastro issues are not something I want to remember India by. In all, I’m disappointed in myself for not getting better, not reaching out for help sooner, and not completing my ten months.

Part of the therapy of adjusting to life back in the United States is reflecting on why I accepted the Fellowship and what I learned from it. The above quote captures some of the reasons for traveling to India. The heights of the challenges of living in a country unbeknownst to me appealed to my yearning to discover a world at the threat of exposing my weaknesses. I wasn’t sure if my lust for adventure would be enough to understand an entire country while simultaneously respecting and understanding it for the way it was. The mother and daughter I met, I believe are a good example of what I learned. By taking a chance on myself, I was able to make an impact by actually affecting the lives of a community I enjoyed learning more about. However, in some ways my tenacity only took me so far, as was shown when I couldn’t communicate to them that I cared for their future and wanted to make sure that before I left, the daughter would be on a path that would shape her future forever.

Even though I didn’t reach the summit of my goals (in fact I fell short on a lot of them), and even though there remains a huge void that I was not anticipating for another three months, I am grateful for an opportunity that few are able to take advantage of. More importantly, India reminded me that it’s okay to have the face of a dreamer, and that any mask you wear to hide it shields you from a life of fantasy, love, and passion.

Benjamin is passionate about socioeconomic empowerment and is excited to be part of a project that would work on the same ground. He is looking forward towards learning new skills and expanding his knowledge while helping his host organization. Prior to AIF, Benjamin was also part of the Kiva fellowship. Benjamin is excited about the food; the blend of cultures & religions and the history of India.

3 thoughts on “Till Next Time”