Aayush’s Fellowship is made possible by the Rural India Supporting Trust.

This blog is the excerpt from the manual I prepared for the volunteers and staff of Alaap. As I really love storytelling, this is also a story. The blog post is in the form of a dialogue between Shaheen, a volunteer at Alaap, and Om Singh Bubu, one of the older mentors for the volunteer.

Om: As we are there at the entrance of a scientific forest, let me take you back to one more chapter of the forests of Uttarakhand, and how scientific forestry came and about to change the social fabric of the region.

Shaheen, the forests of Uttarakhand have mesmerized people like you since time immemorial and continue to do so today also. Forests here are mostly divided into conifers and broad-leaved. Chir (pine) is one of the most important and common conifers and banj (oak) is broad-leaved. Do you know what ecological succession means?

Shaheen: I remember it learning in my ecology class, but seem to have forgotten the details. It shows the progression of how a stable forest cover is achieved over a  long period of time.

Om: Very good, Shaheen! Yes, the species distribution reflects the process of ecological succession. This succession is divided into three stages as it occurs in nature.

The railways proved to be a major landmark in Indian forestry. German experts helped with the creation of a forest department in 1864. The first thing they did was to identify the sources of supply of strong and durable timber for railway sleepers. Sal and teak were already too much in use, so explorers were sent to the hills for deodar. The department thought that in order to manage forests better, they need to check deforestation. So, forests were divided into reserved (only the state can extract resources) and protected category (other categories of users).

Shaheen: Bubu, would you please tell me more about the Chipko movement? Where was it started, why, how, and when?

Om: Let me put it in a simple way for you. First, the access of peasants was restricted to the forest according to the policies of the administration which were based on the scientific forestry. Do you remember this kind of forestry I described before? Second, it is the fragmentation of the village community in response to the money order economy. Women participated actively in this because of the burden increase on them due to the modern economy requirements. Now they had to look after home, farm, animals, and kids all by themselves, as men were away in the cities. The third is the popular consciousness against the social and ecological disintegration of the hills.

The 1970 Alaknanda floods were probably one of the worst the state had seen. Huge land, human, and bovine losses were witnessed then. Due to the blockage of the Ganga canal, almost 95 lakh acres of land went unirrigated. This was the tipping point. Villagers understood the links between deforestation, landslides, and floods as some of the worst affected areas were directly below the areas witnessing maximum deforestation.

With the conclusion of the Sino-Indian border conflict in 1963, the Indian state of Uttar Pradesh experienced growth in development, especially in the rural Himalayan regions. The interior roads built for the conflict attracted many foreign-based logging companies that sought access to the region’s vast forest resources. Although the rural villagers depended heavily on the forests for subsistence—both directly, for food and fuel, and indirectly, for services such as water purification and soil stabilization—government policy prevented the villagers from managing the lands and denied them access to the lumber. Many of the commercial logging endeavors were mismanaged, and the clear-cut forests led to lower agricultural yields, erosion, depleted water resources, and increased flooding throughout much of the surrounding areas.

People hugged the trees to prevent them from being cut, thus the name “chipko andolan” came. The Chipko protests in Uttar Pradesh achieved a major victory in 1980 with a 15-year ban on green felling in the Himalayan forests by order of India’s then Prime Minister, Indira Gandhi. A similar ban was later implemented in the states Uttaranchal and Himachal Pradesh. 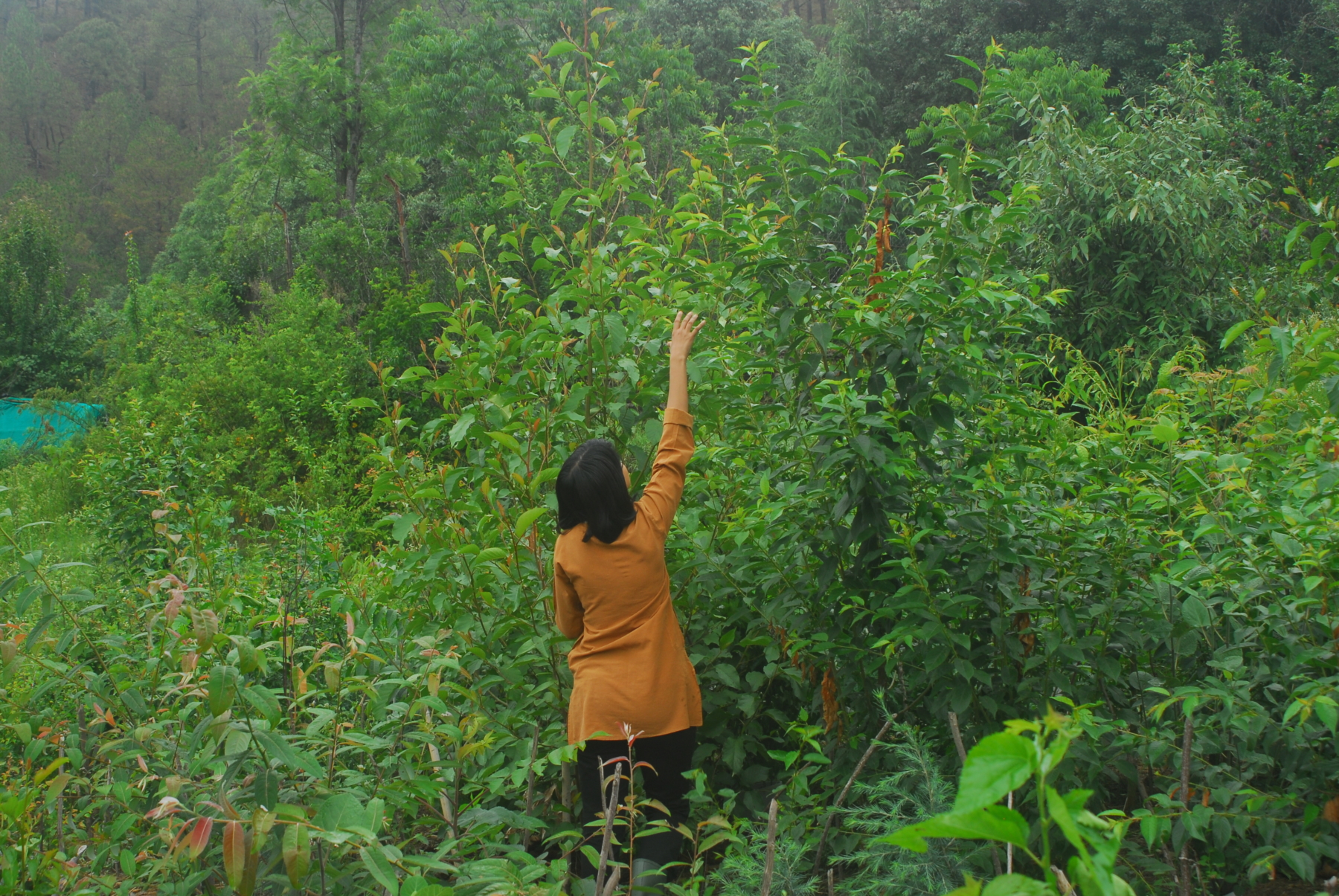 Shaheen: Bubu, I read somewhere that the past peasant movements and the Freedom Struggle were also an inspiration for the people who started the movement. Would you please throw some light on that?

Om: Yes, Shaheen. You are right. It was the Gandhian social activist Chandi Prasad Bhatt who founded a cooperative organization, Dasholi Gram Swarajya Sangh to foster small industries for rural villagers using local resources. This organization was instrumental in taking the movement forward in other places of the state.

Shaheen, the Kumaon was a strategic location for the British, considering Tibet and Central Asian Passes all the way to Russia. In the regime of the British, the idea of conifers being the most valuable resources for them was promulgated further. Scientific Forestry was born thereafter. Scientific Forestry, in addition to taking the British interests forward, curtailed the traditional customary rights of the people of the forest.

Resistance to forced labor is called Utar. In the Utar system, villagers used to carry the stuff of visitors and the British soldiers and officers while they would cross the mountains. It is similar to a mountain expedition. With the arrival of the forest department and scientific forestry, the situation worsened and there was a higher demand for the Utars.

Resistance to forest management was a big issue during those times. The prime reason for this was the closure of vast areas of land to cattle and humans which affected the lives of people badly. In order to take revenge, people started burning down the forests in large number. There were various forms of protests such as flight, strikes, attacks, and marches.

The issues of incendiarisms were higher in the pine forests compared to broad-leaved forests. The reasons were the love of the Forest Department for pine, a tree with leaves (called pine needles) that catch fire easily, it was easily targeted by the people.

In order to take forward the issues of the common people and hear the concerns of people, the KFGC, Kumaon Forest Grievances Committee, suggested dividing forests into

This classification in itself was not according to the needs of people and many felt that KFGC was acting on behalf of the British. That is why the cases of forest fires and incendiarism got higher and higher. The tradition continues till today, but the reasons are different.

These days people want grass for their cattle because of the higher dependency on dairy. Thus vast areas of forests are burnt, to make way for the grass to grow for the next season.

Shaheen: I am highly thankful to you for explaining this to me, Bubu.

Aayush completed his post-graduate degree from Tata Institute of Social Sciences Mumbai with a major in Social Entrepreneurship. His studies focused on sustainable development, development policies, and business development for social enterprises. He researched the consumer preferences about organic processed foods with a focus on small and medium enterprises. During his studies, Aayush has worked with organizations like Stanford University, Teach India, Snehalaya, and Global Youth. He loves teaching and has been giving English, Mathematics, and Social Sciences tuitions to the kids who cannot afford regular tuitions. Originally from Muzaffarnagar, Aayush currently resides with his family in Sahibabad, close to the East of Delhi. When he is not working, one can find him cooking, exploring the cities, or simply practicing calisthenics