“Death is the mother of beauty. Only the perishable can be beautiful, which is why we are unmoved by artificial flowers.” – Wallace Stevens 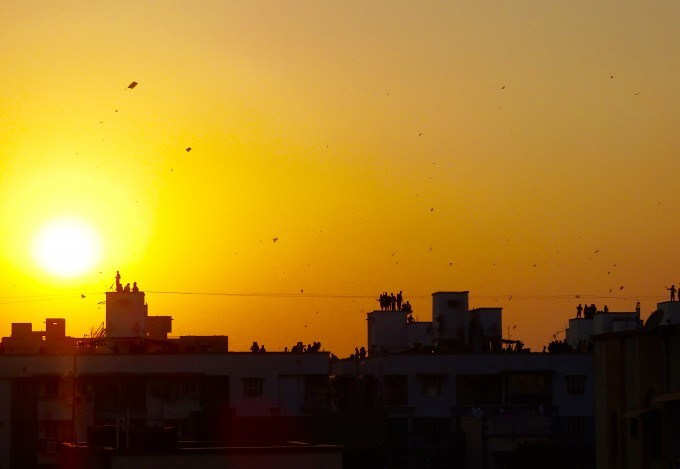 Dipal called from her car on the way to my apartment. It was the night before Uttarayan, Gujarat’s world-famous kite festival.  My experiences with Navrartri and Divali had already me taught that India does not celebrate any festival halfway, and the descriptions of Uttarayan alone had been enough to satisfy my imagination for weeks. In fact, the extent to which Indians ritualize has pushed me up against the limits of my own imagination many times over, and I awaited this festival eagerly enjoying the knowledge that nothing I dreamed up could possibly surpass how much fun I was about to have.

Dipal asked,  “Do you have sunscreen?”
“Yes,” I said. “I always have sunscreen.”
“A hat?”
“No, no hat.”
“We’ll get you a hat. A long sleeve shirt?”
“I have a long sleeve shirt.”
“Socks?”
“Socks?” I looked at my sandals. “What are socks for?”  But I’d seen women walk around wearing that type of sock that’s more like a pronged mitten for their feet with flip flops. I threw a pair in my bag, hoping it wouldn’t come to that.

I spent the night with Dipal and her family, five of us, sprawled out across their living room floor stringing kite thread, looping first through one hole, then the next, and then knotting for strength. It was nice. Anticipation for the morning added a festive air to this quiet task. Piles of kites stood ready, lining the room, as we prepared to lose and replace an untold number to kite fighting.

Early the next morning  I presented Dipal with my previously gathered supplies.  She gave a proud, maternal smile and joked: “Okay, Crysty. You’re ready.  You can go to the roof now.”

Houses butted against one another, and roofs of varying height created the illusion of Escherian stairwells spanning out as far as the eye could see. The sea of families standing atop their homes, preparing firki and setting up kites for the day made for colorful, undulating waves of movement across the city. We were able to communicate with the neighbors, but the enclosure of our own roof provided enough space to escape the exhaustion that can overcome in a crowd.  The whole affair was simultaneously communal and intimate. 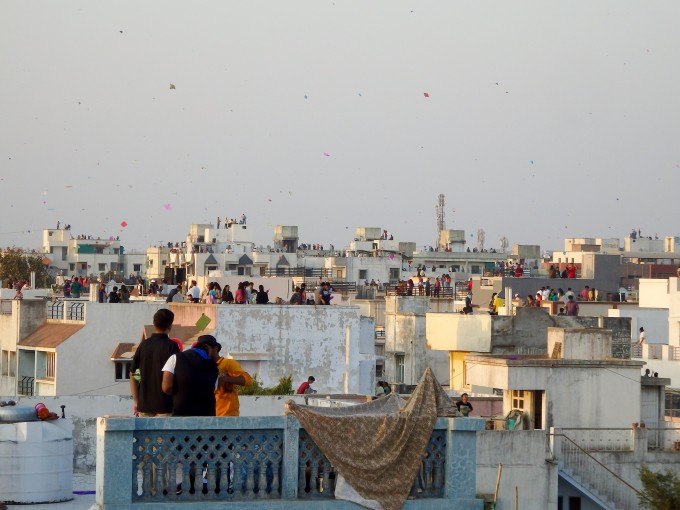 Kites dipped and climbed with celerity as I listened to hollering from the roofs nearby.  The sound was utterly unfamiliar: It wasn’t just the phrase “Lapet, Lapet!” to signify when a kite had been cut, but something in the tone, too, that was hard to identify. It sounded like the battle cry of pirates and lost boys, not of vikings or gladiators; it was boyish and rowdy, a tone that cycled upward in anticipation of the inevitable and carried none of the weight or resonance of morbid veteran conquerers. It was a tone that said today would be a fair fight; the competition would be friendly, but riled up.

I also watched kite after kite droop to the ground after being cut, aimless limbs of thread tangling in power lines and tree branches, not unlike Mardi Gras beads. “Who cleans all of this?” I asked. My friends tittered.

The day drifted breezily. I tried my hand at flying, but my kite flopped about like an angry fish and went nowhere. After a few ridiculous attempts I left it to my friends, taking more enjoyment from the larger images playing out before me. True to the intention of the festival kites crescendoed with the sun, sending more color into the sky with each passing hour and then receding as afternoon dimmed to evening. Sky lanterns emerged over the horizon and glowed, stunning me into reverie. Inky silhouettes underlined this vast moving expanse.

I listened to those nearby. “These lanterns are banned now. Too many complaints, the government won’t allow it. Some people are flying them anyway, but this is nothing compared to last year.”

“They’re illegal in New York, too,” I said, “unless they’re tethered to the ground. For all of the same reasons.”

I knew that I should not be so enthralled. Intellectually I was aware of the environmental impact, of the pollution that I wake up to each morning, and of the waste that would loom over this city like a hangover for days. I watched one lantern struggle to float as the wind bumped it into houses, the owner hopping frantically from roof to roof to catch it before it became a hazard. Finally he reached a gap too large to cross and we watched on helplessly as it twisted around a neighbor’s satellite dish.  Manja, the kite’s thread, made with ground up glass, poses such a threat to avian populations that the Wildlife Trust of India’s Emergency Rescue Network considers Uttarayan a manmade disaster. But this excess is also our celebration, and staring up into the most impossibly romantic night sky I have ever seen, watching wish lanterns whirl around me and fireworks that didn’t explode so much as sizzle across the sky like shooting stars, I felt still.  I watched this universe as if I was its axis, and I couldn’t help but marvel at how this, too, so much more than lanterns, paper kites, and fireworks, but this innate human desire for communal joy, this collective release, was also an endangered thing.

The world is changing, I know that. The consciousness of climate change has emerged, is growing, and by nearly every measure isn’t happening fast enough. The tradition of Uttarayan, among others like it around the world, make up a genus that must become extinct in order for other species to persevere.  But in this foundation-rattling future we struggle globally to uphold we have no vision yet for unfettered joy, what it might look like, what shape it might take, and many of us have come up against the painful idea that perhaps, maybe, there is no space for it. Knowing that this evolution is urgent makes it no less distressing to accept.

Dipal said, “We decided not to fly any lanterns this year because they pollute too much.” I nodded. But we looked on without disgust or moral indignation toward those who did. This is Dipal’s favorite festival, and I have to say it became mine that night, too.  I still found myself thinking “If I have to be present at the end of the world, I hope it looks like this. I hope that at every nadir of civilization someone climbs a flight of stairs to send a kite up as a signal of extrication.” For a moment I understood, completely, the weight of what we have to lose in order to acknowledge the necessity of change. Some of it is really, really beautiful. 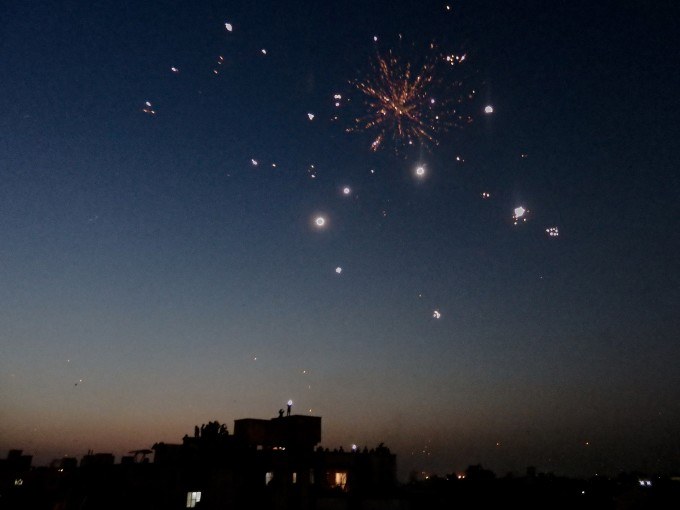