Akshara Centre began and continues to be a part of the women’s movement towards gender equality. Founded in 1995 as a gender resource center before access to the Internet made gender material readily available, Akshara catered to women and girls seeking a safe space to learn and grow – a space still cultivated today. Through gender programming, Akshara seeks to bring equality to the forefront of people’s minds: especially the youth of today. Through the dissemination of information and the building of mutually beneficial partnerships, Akshara Centre is working towards the creation of a gender just and violence free society for everyone. 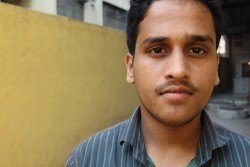 As Vijay casually points out the window next to us, I can’t help but think, by all accounts, he shouldn’t be sitting across from me. “Today you see big buildings outside your office but once upon a time there used to be zhoppadpattis out there.” Vijay is letting me interview him about his life and time with Akshara Centre, “I spent my childhood in those slums.” Because Vijay’s family had no claim to the land, they were in constant fear of bulldozers razing their home. But, it wasn’t just the government clearing slums that would tear his family apart. One otherwise normal day when Vijay was two, his dad passed away – leaving a widow and two young sons behind. Not soon after, their initial fear came to fruition when bulldozers showed up and Vijay’s small family found themselves fatherless and homeless. “For two long years, we lived under a bridge,” Vijay tells me, “actually just down the street from where we’re sitting right now.” But Vijay isn’t lamenting his own experience as a young boy yearning for an education or living on the streets in Mumbai; instead, he focuses on the impact those years had on his mother, “She was a single parent living in such conditions and you know how it is for a single woman in Indian Society. Indian people’s mentality is horrible; it’s disgusting. It wasn’t safe for Mother to live out in the streets.”

Vijay has been through more than most. He is a young man, slowly growing into himself.
He has the beginnings of a beard outlining a rounded jaw line, and a neatly trimmed mustache that gives him a few bonus years for anyone guessing his age. With warm eyes that draw in even the most aloof stranger, Vijay easily disarms people of their insecurities regardless of the fact that he has plenty of his own. It’s his smile that instantly wins me over, though. Full of exuberance and youth, it’s hard not to be drawn into the moment when Vijay cracks his elusive grin. He has a heart of gold and a giving mentality despite all the trials and tribulations he’s been subjected to. 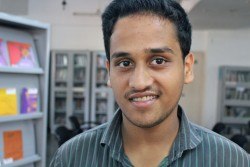 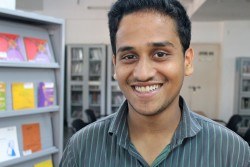 Vijay’s admiration for his mother is very apparent throughout our conversation. When I ask who his role model is, he doesn’t skip a beat, “My mom.” He attributes who he is today to her. “My mom has faced so many hardships in her life. Whatever we learn at Akshara about gender violence, how society perceives women? All of those things have occurred in our lives. People call her names and label her as a ‘bad woman’. Society at large is quick to make a judgment about everything; people say such despicable things.”

The Youth for Change Program at Akshara Centre sensitizes college youth to the notion of gender violence and the dangers of sexual harassment. We push an agenda of gender equality. For many, these are well known theories and Akshara is just a medium to ground philosophy into a realistic context. For Vijay, it is the opposite. He has personal experience with the reality. Through the eyes of his mother, he has witnessed the ramifications that gendered social stigma can have. Vijay has the realistic context, so for him, as a man in India, Akshara is a safe place to explore and deconstruct gender as he knows it. He confides in me, “I cannot speak my mind so freely anywhere else like I do here.”

Vijay’s situation has improved incrementally. His family lives in a house in Mankurd now, a Northeastern suburb. “I often still feel unsafe,” Vijay confesses to me. “I have to cross the railway tracks nightly because I can’t afford to pay for a rickshaw [roughly $1].” This neither deters him from showing up to the office or even Akshara events around the city. It also doesn’t stop him from his dream of becoming a chef in a 5 star restaurant. Vijay successfully embodies many roles: student, activist, son. And while by all accounts, he shouldn’t be here, he is – proudly and rightly so. 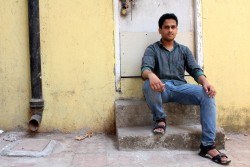 Above is an edited version of a story I wrote about Vijay for Akshara’s Youth for Change Program. The interview was done through a translator as Vijay is most comfortable with Marathi and Hindi.

During her senior year of high school, Jozi set out on her first foray into the international nonprofit world when she moved to Peru to tutor in a self-sustainable boys' home. This experience set the stage for her career in nonprofit work, internationally and domestically. During her tenure as a student at UW Madison, Jozi helped her organization, GlobeMed, raise over $18,000 to implement the Rural Family Sanitation Project in Kampong Thom, Cambodia. The project helped install over 100 latrines and facilitated a large group educational campaign centered on safe sanitation. She spent her junior year of college studying in Cape Town, South Africa where she volunteered as an English tutor with Ubunye in townships on the outskirts of the city. The summer before her final year of college, Jozi received a scholarship to intern at the Malawi Human Rights Resource Centre in Lilongwe where she not only lent a hand in creating a working manual for paralegals in the Malawian justice system, but also assisted in widespread awareness campaigns on domestic violence, early marriage, and alcoholism. After graduation, Jozi moved to New Orleans to work with City Year. Placed in the 8th grade at Phillis Wheatley Community School, she ran small group pull outs for high need students focusing on reading and writing remediation.

2 thoughts on “Vijay: Against All Odds”