After spending weeks preparing for it, the first focus group discussion (FGD) I conducted did not go as I’d hoped. The big deliverable of my AIF Clinton Fellowship project is a research study assessing the knowledge and attitudes of caretakers of women with disabilities toward menstruation, reproductive health, and sexual abuse prevention. I had spent weeks researching best practices, poured over examples of discussion guides, and written several iterations of my own questions until I felt they were appropriate. I put care into every decision: the ice-breaker activities, the order of topics, and the word choices. Each of these were critical elements to create an atmosphere where a group of conservative women could shed their discomfort and divulge intimate information. My hope was to facilitate conversations that challenged patriarchal norms and allowed them to think about what their lives could look like with more awareness and advocacy. Twenty-two mothers had arrived and were waiting patiently for the session to begin. And at this pivotal moment, I was tongue-tied. Quite literally, I could not actually say these words I had spent so long crafting, because I had to say them in Tamil. Though my colleague translated and was herself a good facilitator, we did not spark a particularly revolutionary or engaged discussion. This is not a commentary on the participants, but rather on myself. I failed to consider how language would impact my goal to have radically open, vulnerable conversation. Coming out of someone else’s mouth, my intentions were distorted due to differences in tone, body language, and the inescapable clumsiness of translation.

The big irony here is that I do actually know some Tamil. Tamil is a Dravidian language spoken in India in Tamil Nadu and Puducherry, the region where I worked. It is also my mother-tongue and first language, though I quickly traded it in when I moved to America (more on that in Part II). Through a combination of growing up with it, tutoring and daily use in Puducherry, I am, according to some measures, functionally Tamil fluent. And yet, as that first FGD made starkly clear, deeply relating to someone through language goes beyond basic function.

I faced a number of challenges to satisfyingly using Tamil, despite it not being exactly foreign to me. For one, limited vocabulary lessened important discussions in my work. In English, I can say a comment is rude, insulting, or derogatory. These effectively convey the same idea, but each variation holds a different connotation and degree of intensity. But in Tamil, I really only know how to say it is bad. In our FGDs, this made a big difference. I didn’t want to just say sexual abuse of a girl with disabilities is bad; I needed to say it is vile, cruel, or horrendous.

Though there are many ways to build connections, talking is easily my first choice. And what I love most is story-telling. It was exceptionally frustrating to have thoughts I couldn’t convey, to have my stories lose their power as I sifted through a meager vocabulary and poor grammar. It took me a while to pinpoint and articulate these barriers. I have never thought about linguistics as much as I have these last ten months. I slowly learned to explain to my parents, coworkers, and Tamil tutor all the aspects of the Tamil language that was still beyond me: slang, understanding humor, cultural and historical references.

Dialects presented another significant complication. Every Tamil-speaking community has different styles of the language. Madurai Tamil is different from Coimbatore Tamil which is different from Chennai Tamil, which I presume is what my parents must speak having grown up there. I was even told by one scholar that she doesn’t consider Chennai Tamil to be “real” Tamil, because a lot of English is mixed in (this phenomenon is known as “Tanglish”). I felt particularly unprepared to navigate caste-based Tamil. Early on in Puducherry, I learned that the Tamil I grew up speaking was indicative of my family’s caste, a concept laced with a complex history, and troubling political and social impacts even to this day, which I am still struggling to reconcile.

On a Crusade Against Bad Blood

I didn’t have a breakthrough moment overcoming these roadblocks. I never unlocked a secret compartment in my brain where four-year-old me, the Tamil chatterbox I once was, is hiding. In terms of my work, my success story with Tamil boils down to two words: ketta ratham.

Ketta ratham means “bad blood.” The opening question in our discussions about menstruation was “what is a period?” The most common answer we heard from mothers was that a period is bad blood leaving your body. I had barely spoken in the sessions up to this point, still allowing my lack of fluency to silence me. I was even more discouraged because we’d had two more lackluster conversations since the pilot, and I expected this to go the same way. The mothers answered our questions with facts and disassociated from their emotional experiences. I wanted more than yes-or-no answers, to hear their unfiltered experiences, but I could not express these goals.

Then it dawned on me that ketta ratham is kind of an odd phrase. In fact, it seemed to be a moral phrase. I wanted to know why were they using a moral term to describe a biological process? In my curiosity to know the answer, I did not overthink whether or not I could adequately ask this in Tamil. I simply did, and was not met with confusion or amusement as I had feared. For finally speaking my words with my own voice, I was rewarded with more authentic responses from the women. We pushed the conversations further, and I heard more of their raw stories, uncovered their trailblazing insight, and formed deeper connection than I had imagined possible.

I started using “bad blood” to describe my crusade against menstruation stigma and the many other social forces that restrict women from living freely. But it also served as a personal reminder to stay focused on what I was there to do. The mothers I met in Puducherry were determined to do everything they could to care for and protect their daughters, and I had promised to help. They were more interested in what I had to say than I how perfectly I said it. 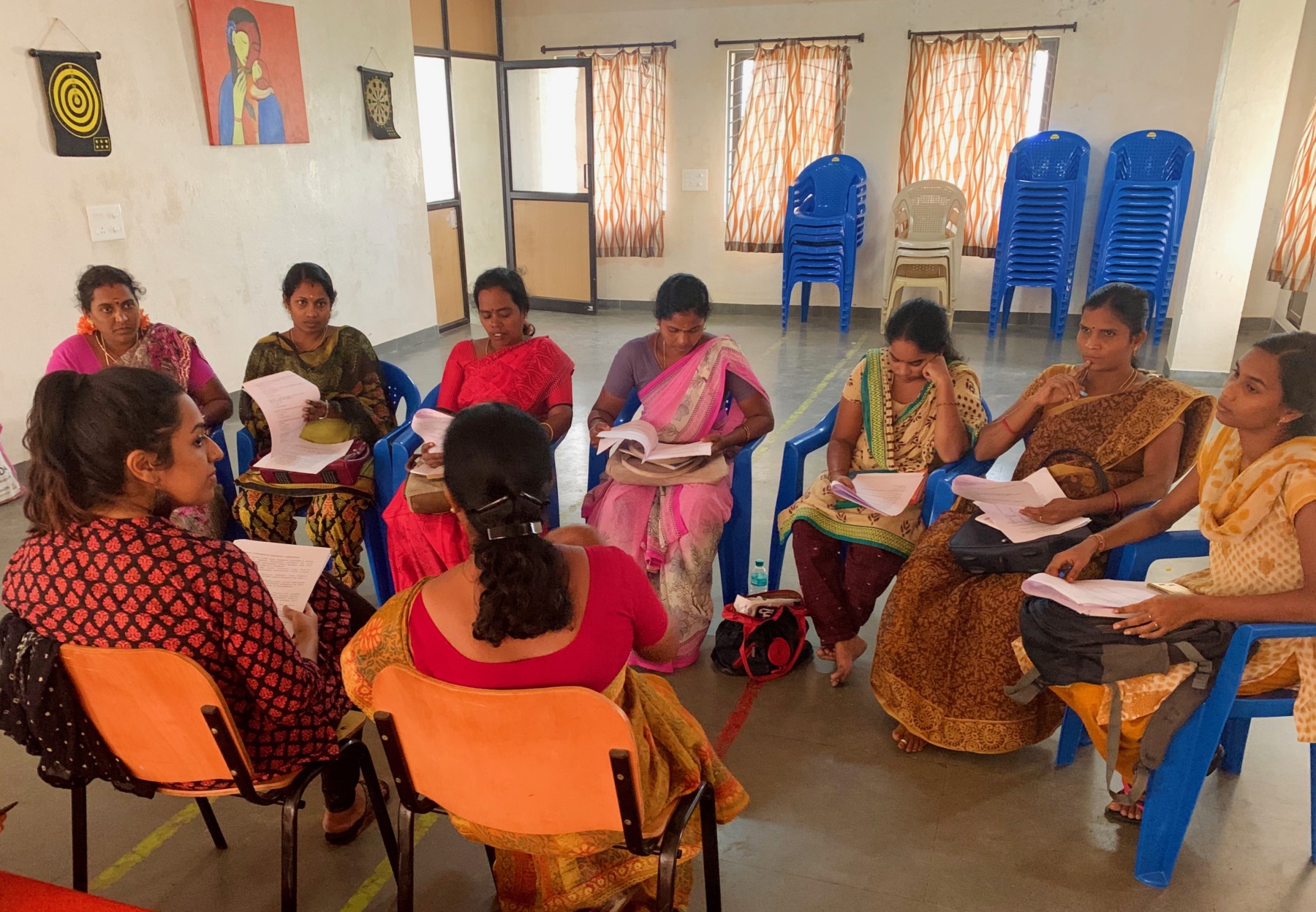 More on my research study…

To hear more about my research study and findings, watch my final presentation “Is It Bad Blood?” below (starting at 40:25)

Srisruthi "Sri" Ramesh is serving as an American India Foundation (AIF) Clinton Fellow with Satya Special School in Karuvadikuppam, Puducherry. For her Fellowship project, she is creating a training manual on menstrual hygiene management and sexual reproduction to educate adolescent girls with disabilities, their parents, and their care givers. Sri is a San Francisco Bay Area native with family roots in Chennai, Tamil Nadu. She is passionate about ethics, gender, and development in South Asia. While in college, Sri founded a student organization for careers in social impact and was awarded a university fellowship to work at Equal Community Foundation, a Pune-based non-profit focused on gender equality. After graduating, Sri worked at Ernst & Young and later spent a month reading and writing on an island in the Pacific Northwest. She enjoys cooking and baking, reading historical fiction, and doing armchair philosophy with friends who will indulge her. She is very excited to be a part of the AIF Clinton Fellowship community, explore new places in India, and improve her Tamil. She hopes to pursue research on development in South Asia after her Fellowship year.