Why do you rise for justice?

This is the question we at Jagori Grameen are posing as part of the India wide social media campaign for the international One Billion Rising campaign. One Billion Rising is an international movement to stand up against violence against women. Last year, people in 207 countries rose in solidarity for victims of sexual violence through dance, song, and music; reclaiming spaces where women’s power is otherwise minimal, in the name of justice for all. Jagori alone mobilized around 23,000 people across Kangra District, Himachal Pradesh on the international day of solidarity, February 14.

The concept of justice for women is a central issue to Jagori’s mission. As an organization operating in a relatively rural part of northwest India and dedicated to creating a more equal and just society we work on a range of issues from agriculture to domestic violence cases as part of our women’s court. However, as our entire organization gears up for our launch of the 2014 OBR campaign on December 16th, the one year anniversary of the Delhi gang rape, we realized that One Billion Rising, while a powerful message in the tool box of feminist discourse, was only one way to tell the stories of the many fantastic organizations dedicated to working for justice for women for years.

As such, a group of us began the One Billion Rising India blog. Our hope is for the blog to serve as a resource both for inspiration as well as story telling for the organizations and individuals dedicated to working for women’s rights. For all of the men, women, and children who have been dedicated to answering the question “Why do you rise for justice?” for years.

While we have a ways to go until the One Billion Rising India blog is as diverse and inclusive as we hope it will become, we encourage you to check out the pictures and stories beginning to fill the digital pages. We each have a story on why we stand for justice. We at Jagori Grameen believe it’s time to bring these stories together in one place. We hope you’ll join us.

For answers to why we rise for justice check out: http://obrindia.blogspot.in/ 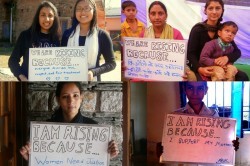 Cassie believes that the search for creative solutions in sustainable development is crucial to problem solving. Her focus on India was solidified when she was accepted into the Hindi Language program as part of the Ohio Foreign Language Academy. During her undergraduate studies at Seton Hall University, she focused on Economics and South Asia both through coursework and as a student with the School of International Training in Jaipur, Rajasthan. While studying with SIT she completed an independent study project in Raithal Village, Uttarakhand on the impact of climate change on cash crops and traditional community livelihoods. Currently, she is a Network Associate with Generation Enterprise, an international non-profit based in Lagos, Nigeria and Delhi, India dedicated to assisting marginalized youth receive the business skill training and confidence they need to start sustainable, high-growth potential businesses. Cassie's passion for social innovation and food security is driven by the fundamental power of good food to nourish the individual, build community, and bring us all to the same table.