On some 375 acres of almost untouched land, surrounded by ancient hills, and small villages, lies Rishi Valley.  Housed in this pristine area is Rishi Valley Institute for Educational Resources (RIVER).  RIVER has developed an innovative multi- grade multi-level (MGML) curriculum that has given teachers the tools to manage single classroom schools of 30-40 students in grades 1-5 as is customary in many rural schools in India. The MGML methodology is rooted in promoting village-based or context-based education and in creating an environment of student-centered learning where the teacher plays the role of facilitator as students guide their practice through hands-on high-interest activities in all subjects. 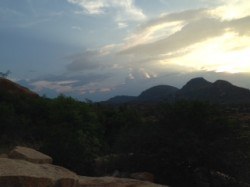 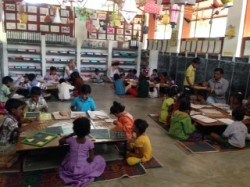 My role as a fellow with RIVER is to create a support package that addresses learners who may have disabilities, attendance problems, lack appropriate social skills or may just need an extra push or reinforcement to help the content stick. In thinking about how to create the most effective supplementary curriculum for this unique style of learning, I have spent the last few weeks as a sponge; observing, listening and slowly getting my hands wet with some content development.

Through this process, I have quickly learned that one of the key ingredients in the high levels of success of this methodology is the manner in which schools function as community centers.  They are not merely a space for students to come, learn and go.   Every detail from the materials and pictures used for the activity cards to the mother’s folk stories makes community a priority in the process of educating its children.  These schools help address the social, emotional and medical needs of the students and their families and provide a sense of safety and reassurance within their communities.

Since the establishment of RIVER’s MGML-based schools in Rishi Valley, a transformation has occurred.  Students, both male and female, are now seeking higher levels of education and choosing to pursue jobs and careers outside of their villages.  Parents have a clearer understanding of the opportunity that comes with higher education and youth are motivated to chase these opportunities. Anil Duth is one example of a young man who pursued his dreams.  He began his schooling as a student at the Rural Education Centre (REC), the first school opened using the MGML curriculum.

Some of his fondest memories from his primary years with this school include the experience-based learning and spending time in the library, story telling and reading.  In the afternoons students didn’t have regular classes but instead participated in extracurricular activities like watching movies, playing games, taking swimming classes in the local wells and hiking.

Growing up, as was common for many families of Rishi Valley at the time, Anil’s father was the primary breadwinner.  After completing high school, Anil became a teacher trainee with REC to help out his family financially.  He was very attracted to the methodology and enjoyed his work in the classroom that he received his primary schooling in.  Anil went on the complete his degree and returned to REC as a classroom teacher.  Although he enjoyed the work, at the time he received low pay and soon saw that many of his peers had pursued an MBA degree and were able to find lucrative jobs in cities.  Drawn to the idea of more opportunities, Anil earned his MBA and began work with Reliance in Tirupati as a trainer in life insurance.  He received high performance scores and was earning well.

However, Anil felt that work with Reliance was a purely business-based experience.  In his reflections on his role with Reliance he stated, “ my main job was to sell the policies or products to the customers. Somehow I felt that this is not the way to deal with the public. We would talk about money only.  There is no other ethical focus there.”

After a few months in this role, Anil received an offer to join the RIVER team and return to Rishi Valley.  He eagerly accepted.  With RIVER, he was a teacher trainer for MGML and than entered into monitoring and support of teachers, and content development.  Anil worked with various groups from across the country and world in designing content and helping teams localize the content. RIVER’s Directors, Rama and Padmanabha Rao encouraged Anil to explore new opportunities and he seized each one as a chance to learn and grow.

Members of the local villages have known Anil since childhood.  He continues to maintain strong bonds with the people of his community. His relationship with the villagers has not changed with his age or education but has evolved. Now the members of the community look to Anil as a model of success and frequently consult him with questions about their children’s higher education and job opportunities.

In order to successfully conduct many of the activities that exist in its MGML methodology, RIVER relies on support from the community.   The strong relationships that Anil and many other staff members have with the village communities are leveraged.  One such example of an event that depends on community involvement is Metric Mela.  Metric Mela is a metric unit inspired community festival in which students will put up stalls on school grounds and in the villages.  Typically all the members of the village will attend. The stalls will measure a person’s height and weight along with other tangible objects through challenging guessing games.  There will also be food stalls that give students practice with the money exchange process. The full community will attend and the children will record and analyze data.  From this event, many children found that their mothers were significantly underweight.  Children started looking for ways to help their mothers including completing some of the household work and encouraging them to eat eggs.  These kinds of initiatives can only be successful if the community supports and trusts the school and staff.

Although he had the opportunity to leave Rishi Valley and pursue a lucrative career in a bigger city, Anil chose to stay.  He feels that “ in everyone’s life there are sweet and bitter moments.  It’s not that life is completely smooth.  There will be a mixture of highs and lows. When we work for the children and look at their smiles, we can bear the highs and lows.

Through the example of Anil’s story and that of many other staff members in RIVER’s MGML based schools, I have come to see how this organization has built a strong grounding in the communities it serves.  In my time here, I aim to utilize these ties in addition to creating my own bonds with members of the local community in order to foster the development of positive perceptions of children with all types of special educational needs. In turn, I hope this will foster a shared sense of responsibility for the integration of and care for children of all backgrounds and abilities; change that will transcend the barriers of classroom walls.

Sarah graduated from the University of Southern California with a B.A. in Communication. During her time at the University of Southern California she became very involved with a student run nonprofit organization called South Asian Rural Student Aid (SARSA). Through taking a leadership role with this organization, her interest in Indian rural education was sparked. She had the opportunity to organize a group of volunteers to travel to India in 2010 and teach English at an elementary school in Delhi. She went on to join Teach for America and teach Special Education in the District of Columbia. During her three years in the classroom, Sarah taught grades PK-5th and developed a strong passion for working with struggling readers. Through graduate studies in Special Education, Sarah became increasingly interested in mental health and methods of promoting positive student behavior in and out of the classroom. Sarah has been working at Rishi Valley Institute for Educational Resources (RIVER) for the last year. She has been developing curricular materials for students from diverse backgrounds (including students with special needs, migrant communities and/or engaged in child labor) focused on mathematics. She has also had the opportunity to share some best practices from the U.S. with teachers and staff here while also learning many new strategies for effective instructional practice. She has thoroughly enjoyed her time immersed in curriculum development, exploring methods of holistic education and traveling through India. She is excited to continue on for a fellowship extension at RIVER.

2 thoughts on “Why He Stayed”