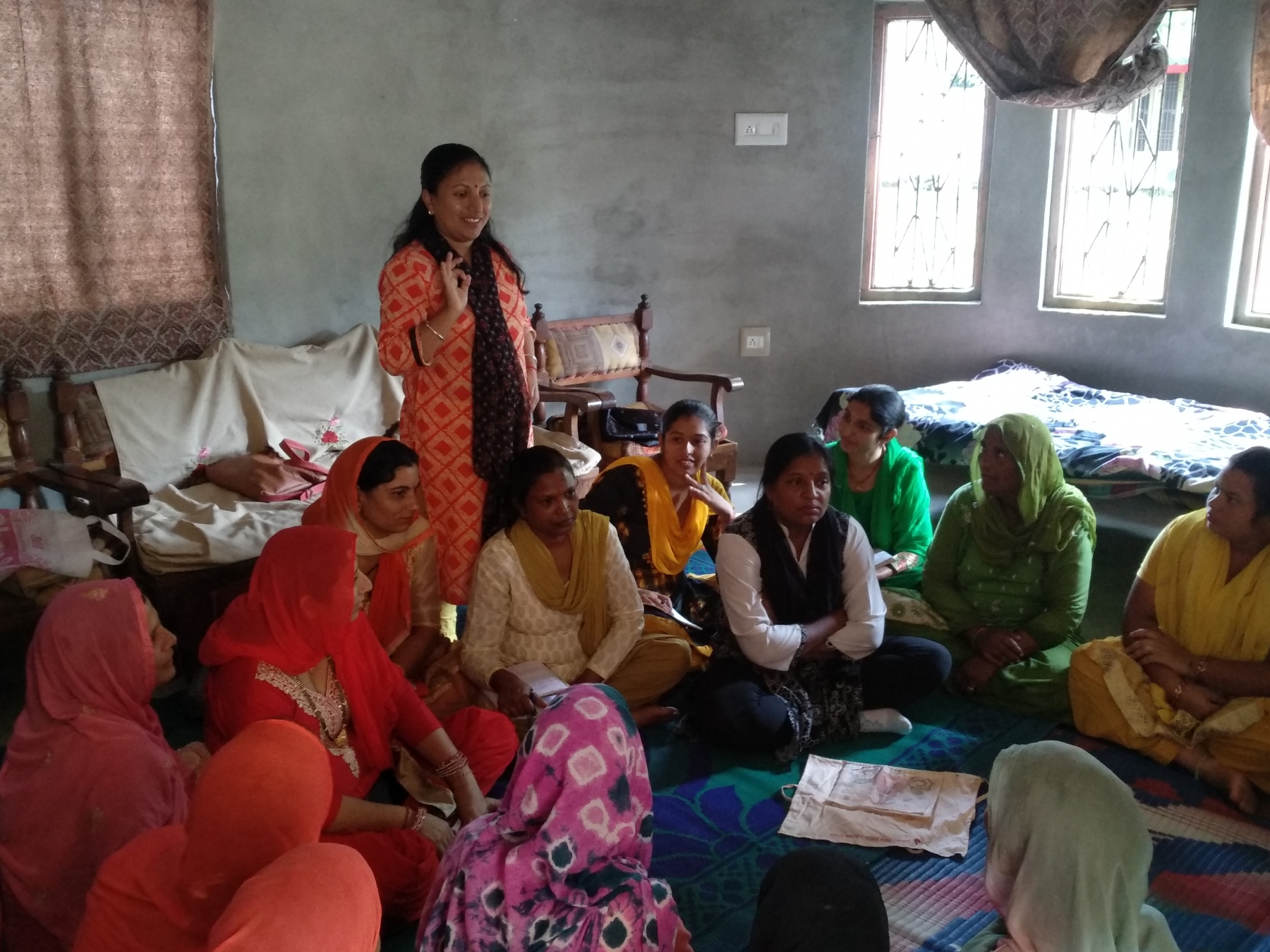 In an attempt to promote an open conversation about reproductive health, Jagori recently organized a health mela (festival) in Jangal, a small village in western part of Kangra district. We invited Dr. Kusum, who is a highly experienced Ayurvedic doctor. She talked in depth about women’s reproductive organs with the help of an apron. She used simple language to explain complex biological organs which the audience could easily relate to with help of the terms that are commonly used. She then talked about the changes that take place inside a women’s body during menstruation, and how a child is conceived inside the women’s uterus. To clarify further, she mentioned how twins are conceived. Using the example of Earth as Uterus and seed sowed inside the soil on Earth as sperms from Men, she explained the entire process of a child being conceived, specifically challenging the dogma within the society pertaining to women being responsible for birth of a boy or a girl. She clarified that women have an XX chromosome and men have an XY chromosome, and that it is men’s chromosome that is responsible for a child either being a boy or a girl. She broadly elaborated on the reasons behind a women not being able to conceive a child, since inability of women to conceive a child often gives rise to domestic violence. There were some questions raised by women in the audience relating to family planning. They talked about certain cases where that married couple didn’t want a child but accidentally conceived it, so they wanted to know what would be the best way to go about not conceiving a child. The most obvious and easy way of course is to use contraceptives. Dr. Kusum talked about two surgical ways in which this can be done, one is female sterilization referred to as tubectomy in medical terms, and it is generally a more complex procedure and involves higher risk as compared to male sterilization which is referred to vasectomy in medical terms. Dr. Kusum also consulted personally with around nine women. Most of them had complaints of irregular menstruation, backache, white discharge and prolapsed uterus. Prolapsed uterus is one of the most common conditions found among middle-aged women in this area. Medically, there are many causes that can be responsible for a prolapsed uterus, but there are two very specific reasons that are responsible for this condition among the middle-aged women that Jagori works with. It all boils down to the kind of lifestyle that the women lead once they are married: women are expected to work in agricultural fields once they go to their in-laws. The agricultural fields in the region are hilly and mountainous, and it is extremely strenuous task to get up and come down with all the heavy weight. Even during pregnancy and post pregnancy, they continue such heavy physical work, which weakens their pelvic muscles, and with age, the production of estrogen in a women’s body decreases, which ultimately results in a prolapsed uterus.

It has just been a few weeks since I have joined the organization and stared working here as an AIF Fellow. There are lots of new faces I see every day, so sometimes I get overwhelmed and have anxiety when meeting a lot of new people at once. All through my childhood everyone called me an introvert and a shy person who never interacted with anyone. Naturally, I always felt that there was something wrong with me. The only person whom I would ask questions was my mother. Until I became a teenager, my mother was my world (she still is in a lot of ways) because she had solutions to every problem. She taught me everything: I learned to wash utensils watching her, cleaning the house with a broom and mop, collecting garbage from the house compound. She was always scared of me going near the gas stove since she never trusted me with it (she thought I would blow up the house), but I was allowed to prepare tea, provided she would turn on the gas stove and I moved away after finishing up. These experiences strongly influenced me and shaped me into the person I am today. I never learnt to differentiate the household work as gender specific, even today I am totally fine with cooking (I make blunders sometimes, but that’s a learning process), I am totally fine with washing dishes and cleaning the house. All of these are extremely small aspects of any child’s upbringing, but they very strongly influence a person’s behavior and attitude in the later years, almost like a butterfly effect. It is these upbringing that brings me to AIF Fellowship, as I have always wanted to work towards eradicating inequalities. The fact that the fate of a person is decided based on where they are born is extremely unfortunate, and must be changed. I credit some of my upbringing as the reason that I felt not only drawn to the Fellowship, but was excited to join Jagori as my placement: a grassroots organization dedicated to empowering women and creating a more equal society.

Going back to women’s health and the common issue of a prolapsed uterus here in the area: if you look for a solution, it is pretty straight-forward. You have non-surgical interventions which involves regular exercise, avoiding heavy lifting, and in worst case scenario, you have uterine suspension or hysterectomy. That’s it, there you have your curative approach. Even a preventive approach in this case would suggest regular kegel exercises, avoiding weight gain etc. But does this solution sound like  the overall ‘Solution’, i.e., will it make sure that all middle-aged women of the future never face this condition again? In the social sector, we often talk about ‘sustainability’. It’s a beautiful, aspirational word and yet very far from what is often achievable. In reality, I believe that sustainability can never be really achieved; rather it’s an imaginary concept that exists in fairy tales, because when it comes to issues in social sector, you are majorly dealing with the mindset of people in the community and no matter how hard you try you can never align the mindset of people in particular community on the same line. Now this does not mean we cannot save the women from the condition of a prolapsed uterus. When we talk about oppression as root cause for medical condition that middle-aged women face, the most important thing to keep in mind is that there is a big component of the state of mind that we generally miss. The manner in which a girl is raised in the house right from her childhood conditions her to act and behave in a certain way, often subconsciously inviting harm for herself which becomes normal for her, like doing heavy agricultural work during and post pregnancy. This is precisely the reason why adolescent girls and her parents are the most critical target group that needs to be addressed if we want the future middle-aged women to have healthier lives. If parents and adolescent girls are aware of these things at the right time, then they can easily avoid women being oppressed by their environment. Only then can we start focusing on the gender imparity that exists and women will have the freedom to make the right choices for themselves. Gender equality is an issue that is rooted in the upbringing of both boys and girls, and precisely that is the reason gender sensitization at school level is immensely important.