Recently, I’ve noticed that there is an urge when we tell people about our “journeys” to fit the story into a neat narrative arc: I came, I struggled, I had a breakthrough, and I came out stronger. In sitting down to write this reflection, I was initially struck with the same impulse, and my first draft of this post was filled with platitudes: “It was hard at first, but I grew so much as a person,” or “the people in these communities have so little, but they’ve been so kind and giving.” It rang false, all of it, not because it wasn’t true—I have grown a lot as a person, it has been hard, and many people have been kind and giving—but because these revelations haven’t followed a predictable path from struggle to understanding. Even as I wrote this towards the end of my fellowship, I am still struggling, still wrestling, still overcome by waves of homesickness and joy in equal measure. There hasn’t been a single “aha!” moment—rather, there have been many, yet these have been unevenly distributed across these 10 months and matched  by steps backwards into loneliness, homesickness, and frustration. “Two steps forward, one step back,” might be one way that an outside observer would put it. Except that it I think it would be more accurate to describe my experience as, “Two steps forward, one step to the side, three steps back, and a jump.”

I once read a quote about India from Joan Robinson, a Cambridge economist, that said, “The frustrating thing about India is that whatever you can say rightly about India, the opposite is also true.” I can’t think of a better way to describe my own experience in this fellowship, where moments of frustration have been matched by moments of grace, and days of extreme loneliness have been met with encounters of quiet beauty. There hasn’t been a neat beginning, a difficult middle, or a satisfying end to these 10 months. Rather than an arc, my “journey” has been a winding road, filled with switchbacks, potholes, uphill climbs, and exhilarating downhill bursts.

What I’ll take away from this fellowship, then, are small moments, rather than brilliant epiphanies: huddling close to the local girls from my dormitory to watch a jagaar, a religious ceremony in which community members become possessed by spirits; convincing the children in my English classroom that Santa Claus is, in fact, real, and surprising them with mountains of cheap candy and stickers scrounged from the local market to prove it; careening over narrow mountain roads in over-stuffed jeeps, both terrified by the possibility of a crash and awestruck by the mountains around me. I’ll take away the smells of the Avani campus after a rainstorm: pine needles laced with smoke from the hundreds of cooking fires scattered across the valley. I’ll take away the voices of the women weavers greeting me with a relentlessly cheerful, “Ca-mi-LEE!” as they enter the weaving center every morning. I’ll take away the taste of cloyingly sweet, milky chai 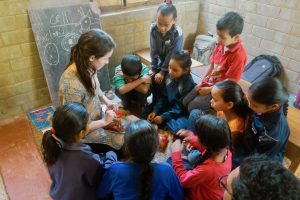 enjoyed in the company of kind village aunties.

Are these memories “learnings”? Perhaps, although the precise moral is hard to distill. What I feel more than anything after my time here is a heightened sense of awareness, stillness, and appreciation for the small moments. When you’re in a tiny village nestled in the Himalayan foothills, thousands of miles away from everybody you know and love, those small moments are sometimes all you have to grasp. Although I often felt profoundly lonely, I also learned to treasure those moments like little jewels; to hold them up to the light and admire their complex beauty.

When I get back to the U.S., I have no doubt that the question, “So, how was India?” will become a common refrain. Truthfully, I don’t think I’ll know how to give an easy, simple answer. But if the asker has time, I imagine I’d invite them to sit, have some chai, and look through these moments, these little treasures, with me. If they’re wiser than I am, perhaps they’ll see some grand “lesson” that I’m missing. Or maybe they’ll just see what I see: glimmers of grace, humor, and beauty in a place that was rich in all three.