After spending the majority of my academic and professional career focused firmly on Sub-Saharan Africa, I am humbled by how much I don’t know about India. AIF did me a favor by giving me exactly what I asked for when I applied for this fellowship — otherwise known as throwing me into the deep end. I requested an education technology placement and AIF didn’t make me a counter offer. They didn’t say you might be better suited for something else. They said, you want to learn about this? Alright, here you go, and they pushed me into deep end of the pool, alternatively known as Bangalore, the Silicon Valley of India.

My housemate, Nora, previously wrote about feeling like a pre-schooler as she discovers herself in the context of India. I feel like I’m pining. You know that person in class or at work who’s a little aloof, or maybe just reserved, not overly friendly, but not unfriendly? I view those people as a challenge. Unbeknown to them, just by being themselves, those people challenge me to learn about them, try to get to know them, even befriend them. We don’t always become best friends, but it typically ends up working out in one way or another. Well, it seems that I have met my match. India isn’t sure if it wants to be friends just yet. We’re both a little wary of one another, feeling each other out.

Wooing is a daily activity. It takes dedication, persistence. 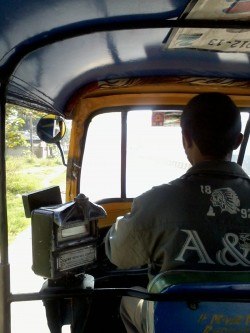 Upon leaving my temporary housing to move into an apartment, I asked the hotel  to call me a cab. It was only when the driver arrived and I was ready to go that I was  quoted a truly absurd price. I was initially offended that the hotel employees  weren’t trying to help me out, since we had become friendly over the course of my  two-week stay. It wasn’t until the front desk attendant, security guard (who couldn’t have been more than 15), two maintenance men, and a cook stood huddled around  me, occasionally translating, and watching me haggle with my cab driver for a good 20 minutes, that I realized it wasn’t a slight. It was the process. They weren’t  throwing me to the wind, they wanted me to woo alone. They were giving me my  legs. These days, the drivers seem amused when I haggle and they tend to do the dance with me.

[Pro tip: My housemate and I later discovered that our daily auto rickshaw  negotiations seem to go much smoother when we’re wearing kurtas, rather than t-shirts.]

I’m wooing for friendship in my attempts to communicate something beyond my order with the gentleman who runs the coconut stand closest to my office, starting with some customer loyalty. Small businesses are the same everywhere. They are dependent on service and relationships. Commiserating over commuting, drinking chai together…we’ll get there. For now, I get a smile and a seat. rather than t-shirts.]

I’m wooing India, yes, but it’s simultaneously wooing me in small, surprising ways every day. It’s wooing me to patience, to reflection. So far, I think India’s winning (it has cuisine in its court), though I’m finally starting Hindi lessons this week, which will definitely improve my game.

Taylor joins AIF from the University of Oxford, where she studied inclusive and special education policy in Sub-Saharan Africa as part of her Masters degree. Her research drew upon her experiences studying abroad at the University of Cape Town as an undergraduate, where her interest in education and international development was solidified. Taylor previously served as the communications lead and project manager for Grameen Foundation's skilled volunteerism unit, Bankers without Borders. There, she was able to combine her passion for women's rights and economic empowerment, with her dedication to service, as she connected companies and individuals to technical assistance projects with microfinance institutions and NGOs around the world. Prior to leaving Washington DC, Taylor also served as a board member for the United Nations Association-National Capital Area chapter. Supported by Wadhwani Operating Foundation

At War with the Unseen: COVID-19 and Its Effects (Part 2)