A few weeks ago, it started becoming routine to hear loud music, dialogue and laughter wafting from the Surya auditorium, which lies next to my office.  I saw groups of excited middle school students streaming in and out of the auditorium and my curiosity was sparked.  After popping my head in a few times I was amazed by what I saw.  Life size leather puppets that were manipulated by students danced across the handmade wooden stage.  Where did these puppets come from? What were these students and teachers dedicating so much time to puppetry for? How did this all begin?

These questions brought me to a discovery that these young hands were reviving the dying art of shadow puppetry.  Shadow puppetry is one of the oldest and finest art forms native to India. There were many communities that used to perform these traditional arts.  In the sixteenth century AD the Anantapur district of Andhra Pradesh was witness to the migration of artisans from Marathwada region. These artisans were master craftsmen capable of combining the dimensions of painting, sculpture and theatre into one creation in the form of life sized leather puppets. Shadow puppetry is currently practiced by a handful of artisans in the Nirmalkunta and Dharmavaram regionsof Anantapur district, located near Rishi Valley. However, seeing the declining popularity of puppetry in the face of recent influences of television, movies and other forms of entertainment, artisans here have innovated to creating lampshades and wall hangings to sustain their livelihood.

A few staff members from Rishi Valley Rural Education Centre (REC) initially took an interest in shadow puppetry to help prevent the loss of this art form. They received insight into the tremendous potential of this medium thanks mainly to the internationally acclaimed Dharmavaram Puppeteers, whose families have practiced the art of shadow puppetry for over 200 years.   The process began with teachers learning the traditional puppetry from these puppeteers and performing in Rishi Valley as well as in neighboring villages.  One thing led to another; the children adapted to the use of puppets in the classroom in a natural way.  With each performance, teachers gradually gained skill and confidence with this art form.

REC went about bringing shadow puppetry to the children through the 12 Panchatantra tales.  These stories from the Panchatantra are adapted for Telugu-language puppet theatre.   Each play has spoken dialogue as well as background music. The puppets are manipulated and the plays performed by school children and teachers. Not only do these tales offer lively and engaging stories for the students to interact with, they also incorporate lessons on human values and morals a priority in the educational process for all the students attending REC.

The introduction of puppetry in the classroom has had many benefits for the students, teachers and community.  Student and teacher performances of shadow puppetry are reviving and spreading the traditional form of storytelling throughout the state of Andhra Pradesh.  It has also been effective in spreading awareness of various locally relevant issues discussed in the plays such as the importance of water conservation and recycling.  Students have newfound motivation to actively participate in classroom processes and attend school as puppetry along with a full- fledged arts and crafts program has been integrated into daily classroom activities. REC teachers and students create all the puppets through reusable resources. Children feel a greater sense of achievement, confidence and love for learning with successful participation in puppetry.

Rishi Valley Institute for Educational Resources (RIVER) has created a user-friendly kit for the purposes of training teachers from across the state and country on how to adapt and modify REC’s method for using puppetry in the classroom to their own context.  The REC children have performed puppet shows at various schools in Andhra Pradesh, the Doordarshan studio and in the neighboring villages. I had the pleasure of watching the children perform this vibrant form of puppetry for the local community.  Below are some glimpses of this performance that was based on a story to teach the importance of avoiding the use of plastic items. 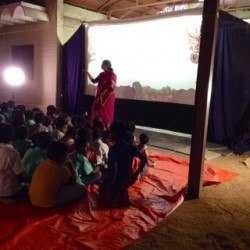 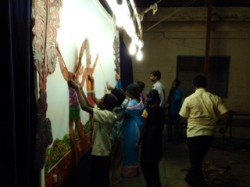 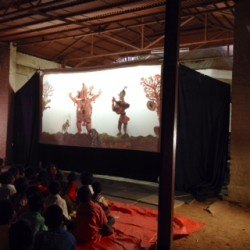 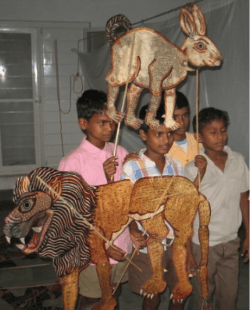 Through their orchestration of multiple puppet shows across the country, these young puppeteers are spreading the joy they experience with this art form to diverse audiences .

Sarah graduated from the University of Southern California with a B.A. in Communication. During her time at the University of Southern California she became very involved with a student run nonprofit organization called South Asian Rural Student Aid (SARSA). Through taking a leadership role with this organization, her interest in Indian rural education was sparked. She had the opportunity to organize a group of volunteers to travel to India in 2010 and teach English at an elementary school in Delhi. She went on to join Teach for America and teach Special Education in the District of Columbia. During her three years in the classroom, Sarah taught grades PK-5th and developed a strong passion for working with struggling readers. Through graduate studies in Special Education, Sarah became increasingly interested in mental health and methods of promoting positive student behavior in and out of the classroom. Sarah has been working at Rishi Valley Institute for Educational Resources (RIVER) for the last year. She has been developing curricular materials for students from diverse backgrounds (including students with special needs, migrant communities and/or engaged in child labor) focused on mathematics. She has also had the opportunity to share some best practices from the U.S. with teachers and staff here while also learning many new strategies for effective instructional practice. She has thoroughly enjoyed her time immersed in curriculum development, exploring methods of holistic education and traveling through India. She is excited to continue on for a fellowship extension at RIVER.