This posting is light, with potential for depth. Engage at your leisure:

Learnings.
That has been an increasingly major theme for me over the past several weeks.
Learning new information.
Learning a truer form of service.
Learning other forms of effective leadership.

& for this learning:
No degree program, enrollment or tuition is required.
Instead:
The trifecta of an open mind, heart and ears – alongside a notebook and pen –
goes a long way. 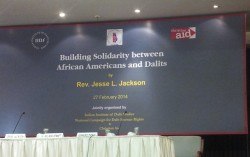 In this spirit of learning, I’ve had many opportunities over the past few months, including special meetings, community workshops, national events, local conferences, and even exposure visits – to see the community and work of other AIF Fellows.

One of the learning spaces in which I was most excited to engage was a lecture held several weeks ago, entitled “Building Solidarity Between African Americans and Dalits”, where Jesse Jackson Sr. was the keynote speaker. The connection and dialogues between these two communities – Black Americans and Dalits – was a key factor to me “falling in love” with India over ten years ago. So, to say I was excited for this lecture, and the accompanying dialogue, would perhaps be an understatement.

My expectations of the lecture were different than what transpired, but still, it was valuable. Mr. Jackson spoke broadly about the separate and collective histories of the two communities, and what the potential was for – and purpose of – further engagements.

There were references to Malcolm (X), (Dr. Martin Luther) King (Jr.), (Mahatma) Gandhi and (Dr. B.R.) Ambedkar.
There was an exhortation to resist injustice through civil engagement, not through internalized and misdirected anger.
Then came the refreshingly practical claim about the role of these two communities in economies and businesses – both local and global.

There was a singular voice speaking, and many ears listening, thinking, processing.
What Jesse Jackson gave was energy, mantras, and possibilities.

Then, questions were raised:
People questioned the realism of this vision of unity, the tensions that currently exist for Africans in certain Indian communities (and vice versa), and the utility of creating a formal alliance and what that might look like.
And then, Jesse Jackson asked some questions too, like: “What is the cost of jailing an Indian for a year versus educating that person?”
But few of these questions were fully addressed in that limited session, and that is okay. That, in itself, has been a learning for me. As my mentor/supervisor has repeatedly said to me about the work in which I engage: “It’s okay to leave things open sometimes; at the least, know that it is out there”.

Thus, in the processes of learning, and in this journey of serve, learn, lead, perhaps Mr. Jackson’s directives of: “Research –> Education  –> Negotiation –> Demonstration” is worth consideration as well. 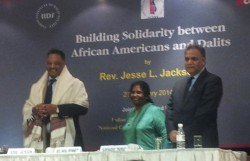 Rorujorona first developed a passion for educational justice as a high school student, desiring to develop better curriculums and programs in mathematics education. As an undergraduate student at Michigan, her interests evolved into international social justice, after multiple experiences abroad as a student researcher and volunteer in Austria, Peru, the UK, and India. Rorujorona was part of a research team in Chennai, studying the intersections and differences of the social justice narratives of race in the United States and India. In addition to meeting with and interviewing several local Dalit activists, she presented her narrative at a local conference in Chennai.

Upon return to the US, she worked in higher education administration, supporting students in public health and regional studies, while maintaining her commitment to urban communities as a mentor and a tutor. Three years later, she returned to India, where her service focused on engaging religious minorities in Uttar Pradesh via intergroup dialogues. Her interest in serving marginalized youth populations eventually led to her pursuit of an MSW at Penn. Her fieldwork placements included providing case management services for youth and families, as well as programming and administrative services for a cultural resource center. During her graduate coursework in Mathematics Education, Rorujorona focused her studies on educational justice and access, participated in local conferences on equity, and culminated her studies in a final project that addressed cultural competency in mathematics education. In the midst of her graduate studies, she further engaged her passion for service in India through intensive studies of Tamil and Hindi.

Since completing her graduate studies, Rorujorona has enjoyed serving local communities in the dual roles of educator and social worker, mentoring and advising many marginalized student populations, including those with learning differences, physical challenges and social tensions. During this past year, her time was divided between teaching and mentoring secondary students, aiding in local political campaigns, and serving the community as a member of the Los Angeles Urban League Young Professionals. Outside of the professional arena, Rorujorona enjoys event planning, bowling, socializing with friends, and volunteering.