It’s been a long and fulfilling year abroad in India and although I didn’t do the best job of writing about it, I wanted to put together one final blog post that would represent some of the major highlights of my experience. It was a year filled with professional and personal growth and I’m extremely grateful for the opportunity I had to serve as an AIF William J. Clinton Fellow. It’s an experience that I will always fondly look back on.

The Work I Did

Over the course of the 10 months I spent at SNEHA, there were a number of projects I worked on, including writing a nutrition protocol that examined proper procedure for identifying and treating cases of severe and moderate acute malnutrition for children under the age of five as well as guidelines to provide antenatal and postnatal nutrition care for mothers and newborns. However, my primary project dealt with the department of Prevention of Violence Against Women and Children (PVWC) and looked at creating a tool that could be used to quantitatively measure a composite score as well as increases in empowerment for survivors of Gender-Based Violence.

I started my job at SNEHA with no prior knowledge of the subject of violence and the severity of it within India. However, as a leading global public health concern, I’m glad I had the opportunity to dive into field and actually work on the ground. Coming up with a method to quantify something as ambiguous as empowerment proved to be quite a daunting task; for every single woman that SNEHA treats, it could mean something entirely different. I started with a set of four indicators that represented the definition of “empowerment” as well as they could within the context of an Indian urban informal settlement community, and then used a set of sub-indicators for each. To truly arrive as close as we could to a composite score, I wanted to account for the significance and variance of each of these sub-indicators by creating a set of coefficients that would mathematically represent this. By running our data sets (luckily, SNEHA had already collected nearly three years worth of data) through various statistical tests, we were able to derive a series of weights that were then applied to our raw scores.

As a collective unit, the indicators, sub-indicators, and weights effectively created composite scores however this was somewhat meaningless for the staff members who were actually overseeing the day-to-day activity of the interventions carried out by SNEHA. Presenting calculations and excel sheets to a group of counselors to introduce this new concept of measuring empowerment seemed like it would cause a tremendous amount of confusion. So to simplify this work, we represented it visually. The result looked like a diamond shape with each indicator graphed against it’s own 100% scale but on a cartesian grid so the indicators could be seen in relation to one another.

Although my work was considerably different from what I thought I would be doing this year, I am proud of the contribution I was able to make to the community I worked in and I hope this tool will go on to help increase the efficacy and efficiency of treatment for survivors of violence.

The Places I Went

A true highlight of spending an extended period of time in another country is having the opportunity to thoroughly explore it. Over the course of my year abroad I visited 13 states and nearly 30 cities. As mentioned in a previous blog post, coming to India as a child meant staying almost entirely in Bangalore so the opportunity to see such a vast amount of India this year was a privilege.

Jaipur: Another Fellow and I went to Jaipur in January to attend the Jaipur Literature Festival. We only ended up at the conference for one day but made multiple trips to Amer Fort (it was closed the first day we tried to go), which was breathtakingly beautiful and incredibly large! Jaipur was packed with history and culture but was also quite small so we were able to explore it in depth. 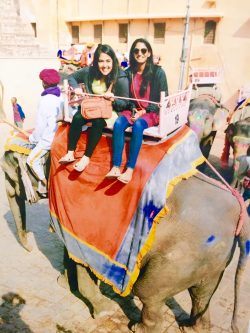 Kochi & Allapey: In April, I travelled down south to Kerala to celebrate the birthdays of three of my closest friends in India. It was a very laid-back trip, which included an entire day spent on a houseboat as we traveled through the backwaters of God’s own country. Terrific food paired beautiful scenery and excellent company resulted in an all-around fantastic trip. 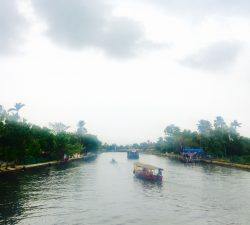 Punjab: The penultimate trip of my Fellowship took me up north to Punjab where two other Fellows and I visited Amritsar and Chandigarh. In Amritsar, we went to the Wagah Border which separates India and Pakistan and attended the daily gate-closing ceremony (I highly recommend this!) and then also visited the Golden Temple. I’ve visited quite a few temples in India but very few (in my opinion) matched the beauty and serenity of the Golden Temple. From there, we headed to Chandigarh where we stayed with a good friend of mine from Northwestern. We were met with tremendous hospitality as we explored one of India’s first planned cities (it looked very much like a US suburb) and even took an afternoon drive into Himachal Pradesh to visit Kausali, a beautiful hill station. 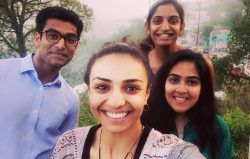 Baliganapalli: The village of Baliganapalli in rural Tamil Nadu is where Shanti Bhavan Children’s Project is located and despite the fact that I’ve taken numerous trips there over the past four years, the most important trip I took this year was to Baliganapalli in June to watch the Shanti Bhavan Class of 2016 graduate from high school. The students who graduated had been my English Literature and Grammar students for three consecutive summers before and spending a week with them as we celebrated the culmination of their 14 years of hard work was pure joy. I’m incredibly proud of what they have accomplished and cannot wait to see their college and professional careers unfold.

The Things I Learned

Apart from the skills I attained and the general knowledge I learned from working at SNEHA, there are a number of key pieces that I will take away from this experience.

I learned that I can successfully live in India long term; I wasn’t necessarily worried about this before but it was still a relatively easy transition (granted, I moved to Mumbai which is arguably India’s most metropolitan city). It is comforting to now know though that I can move to another country and be quite happy there!

I also learned that the issues urban under-developed India faces are drastically different than rural India. This seems fairly obvious but until I actually worked in a community like Dharavi, which is one Asia’s largest slum communities, it was hard to put in perspective exactly what these issues and their solutions look like. From seeing patches of homes be bulldozed in the community to realizing first hand that communicable disease are far more rampant in densely populated areas (the hospital I worked in had an extremely high rate of Tuberculosis and HIV), I’m not sure I would have the same understanding as I do now if I hadn’t actually experienced it all.

These are just a few examples of the things I noticed and I feel far more equipped now to plan and present interventions that address the issues I care about than I did a year ago. There is still a lot to be learned but this year was a terrific starting point.

The People I Met

Over the course of my year abroad, I encountered a number of remarkable individuals who impacted my thoughts and beliefs. From co-workers to friends of friends, I loved hearing different perspectives and ideas. However, what truly separated this experience from just spending a year in India was the privilege of being included in a cohort of 35 outstanding Fellows.

To my dear Fellowship class, I can’t thank you all enough. Your motivation and commitment to the development sector in India was inspiring on a daily basis. I’ve learned so much from you all about how positive change is driven and about India in general. It’s been an honor getting to know you all and seeing the incredible work that you completed over the course of the past 10 months. I can’t wait for all our future reunions and to see what you will all accomplish in the future. 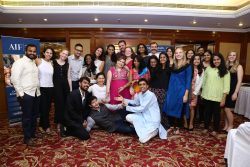 As saddening as it is to see my Fellowship come to a close, I will continue carry these experiences with me in hopes of them providing ambition and further guidance. It’s been quite a journey, India. Until next time…

Natasha grew up in California and attended Northwestern University in Evanston, IL. There, she pursued a degree in French Horn Performance while also studying Global Health. Natasha first gained interest in public health after serving as a volunteer at Shanti Bhavan Children's Project, a residential school located outside of Bangalore, India that aims to provide a world-class education to India's most disadvantaged youths. Through her work with Tufaan Entertainment, a Northwestern non-profit, she was able to successfully raise over $50,000 for Shanti Bhavan. In addition, she has also completed field research in rural North India, specifically the mountain region of Nainital, which dealt with post-natal healthcare practices. Her work in rural India has given her perspective on the opportunities available to improve health care access to underserved communities.